Putin, unaccustomed to losing, is increasingly isolated as war falters 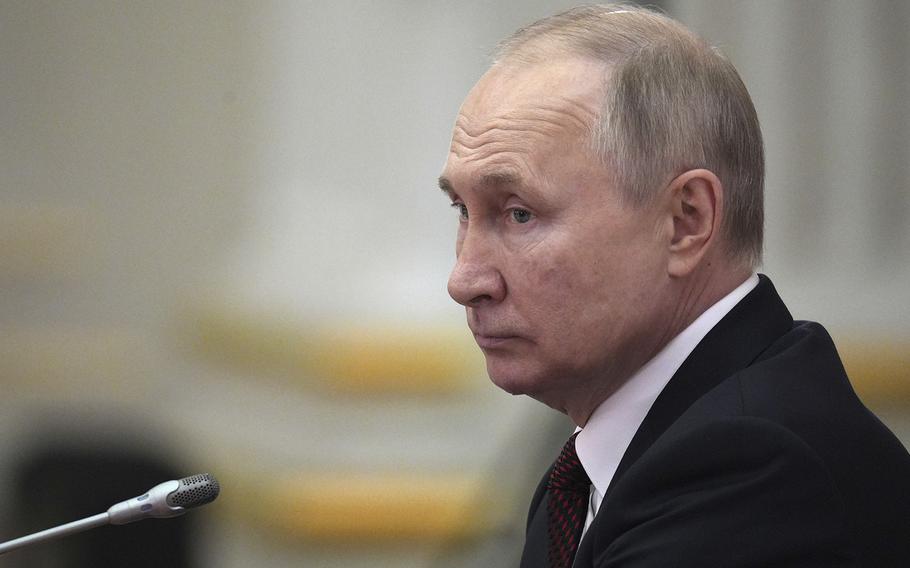 When Vladimir Putin visited Minsk last week to discuss deepening cooperation, a sarcastic joke by his host, Belarusian President Alexander Lukashenko, seemed to ring all too true. "The two of us are co-aggressors, the most harmful and toxic people on this planet. We have only one dispute: Who is the bigger one? That's all," Lukashenko said.

As Putin approaches New Year's Eve, the 23d anniversary of his appointment in 1999 as acting Russian president, he appears more isolated than ever.

More than 300 days of brutal war against Ukraine have blown up decades of Russia's carefully cultivated economic relations with the West, turning the country into a pariah, while Kremlin efforts to replace those ties with closer cooperation with India and China appear to be faltering the longer the war grinds on.

Putin, who started his career as a Soviet KGB agent, has always kept his own counsel, relying on a close inner circle of old friends and confidants while seeming to never fully trust or confide in anyone. But now a new gulf is emerging between Putin and much of the country's elite, according to interviews with Russian business leaders, officials and analysts.

Putin "feels the loss of his friends," said one Russian state official with close ties to diplomatic circles, who spoke on the condition of anonymity for fear of retribution. "Lukashenko is the only one he can pay a serious visit to. All the rest see him only when necessary."

Even though Putin gathered leaders of former Soviet republics for an informal summit in St. Petersburg this week, across the region the Kremlin's authority is weakening. Putin spoke with Chinese President Xi Jinping over video conference on Friday morning in Moscow in an effort to showcase the two countries' ties. Although Xi said he was ready to improve strategic cooperation, he acknowledged the "complicated and quite controversial international situation." In September, he'd made clear his "concerns" over the war.

India's Narendra Modi this month wrote an article for Russia's influential Kommersant daily calling for an end to "the epoch of war." "We read all this and understand, and I think he [Putin] reads and understands too," the state official said.

Even the Pope, who at the beginning of the war appeared to take care to accommodate Kremlin views, this month compared the war in Ukraine to the Nazi genocide of the Jews.

Among Russia's elite, questions are growing over Putin's tactics heading into 2023 following humiliating military retreats this autumn. A divide is emerging between those in the elite who want Putin to stop the military onslaught and those who believe he must escalate further, according to the state official and Tatyana Stanovaya, a senior fellow at the Carnegie Endowment for International Peace.

Despite a media blitz over the past 10 days, with Putin holding carefully choreographed televised meetings with military top brass and officials from the military industrial complex, as well as a question-and-answer session with a selected pool of loyal journalists, members of the Russian elite interviewed by The Washington Post said they could not predict what might happen next year and said they doubted Putin himself knew how he might act.

"There is huge frustration among the people around him," said one Russian billionaire who maintains contacts with top-ranking officials. "He clearly doesn't know what to do."

The Russian state official said Putin's only plan appeared to lie in "constant attempts to force the West and Ukraine to begin [peace] talks" through airstrikes on Ukraine's critical infrastructure and other threats. Putin repeated the tactic this week by declaring on Christmas Day that he was open to peace talks even as Russia launched another massive missile strike just days later on Thursday, taking out electricity supplies in several regions. "But," the official said, Putin is willing to talk "only on his terms."

The billionaire, the state official and several analysts pointed to the postponement of Putin's annual State of the Nation address, when the Russian president generally lays out plans for the year ahead, and the cancellation of his annual marathon news conference as signs of Putin's isolation and an effort to shield him from direct questions since he has no map for the road ahead.

The news conference, in particular, could have proved risky given that hundreds of journalists are typically brought to Moscow from Russia's far-flung regions, which have been disproportionately affected by casualties and the recent partial mobilization.

"In the address, there should be a plan. But there is no plan. I think they just don't know what to say," the billionaire said. "He is in isolation, of course. He doesn't like speaking with people anyway. He has a very narrow circle, and now it has gotten narrower still."

In the question-and-answer session with the handful of journalists, Putin countered such assertions about the postponement of his speech to parliament. He said he had addressed key issues in recent public meetings, and it was "complicated for me, and the administration, to squeeze it all again into a formal address without repeating myself."

But his comments on the war have been short on details. He has gone no further than saying conditions in the four Ukrainian territories that he claims to have annexed, illegally, are "extremely difficult," and that his government would try to end the conflict "the faster, the better."

Putin again sought to lay the blame on the United States and NATO for dragging out the war, in what seemed almost a tacit admission that he had lost control of the process. "How can he tell us everything is going to plan, when we are already in the 10th month of the war, and we were told it was only going to take a few days," the state official said.

Putin appeared exhausted in his recent appearances, Stanovaya said. And even if he does have a secret plan of action, most of the Russian elite is losing faith in him, she said.

"He is a figure who in the eyes of the elite appears to be incapable of giving answers to questions," she said. "The elite does not know what to believe, and they fear to think about tomorrow."

"To a large degree, there is the feeling that there is no way out, that the situation is irreparable," she continued, "that they are totally dependent on one person, and it is impossible to influence anything."

Alexandra Prokopenko, a former adviser at Russia's Central Bank who resigned and left Russia in the weeks after the start of the invasion, said in an interview that her former colleagues "try not see the war in terms of winners and losers. But they know there is no good exit for Russia right now."

"There is a feeling that we cannot attain the political aims that were originally forwarded," the state official said. "This is clear to all." But no one knows how large a loss Russia can sustain before its leaders believe its existence is in jeopardy, he said.

With such a huge question mark hanging over the year ahead, two camps have emerged within the elite: "The pragmatists who consider that Russia took on the burden of a war it can't sustain and needs to stop," and those who want to escalate, Stanovaya said.

Those in favor of escalation include Yevgeniy Prigozhin, the Putin ally who leads the Wagner Group of mercenaries and continues to publicly berate Russia's military leadership.

The growing split presents Putin with yet another risk as he heads into 2023, the last year before presidential elections in 2024.

Even though recent polls show Putin retains the support of the vast majority of the population, who for now continue to accept Kremlin propaganda, the overwhelming perception among the elite is that next year, things could become more precarious.

"We don't know what will happen in the future," said a longtime member of Russian diplomatic circles, who spoke on the condition of anonymity for fear of reprisal. "There might be another wave of mobilization. The economic situation in the next year will start to worsen more seriously."

Sergei Markov, a hawkish former Kremlin adviser who is still in contact with Putin's team, said it was clear Putin still did not have an answer to the principal question ahead of him. "There are two possible paths ahead," Markov said. "One is that the army continues to fight while the rest of society lives a normal life - as it was this year. The second path is as it was when Russia went through World War II, when everything was for the front and for victory. There was such a mobilization of society and the economy."

There are also inescapable questions about glaring weaknesses in the Russian military that have become apparent in recent months, including its evident inability to properly train and equip the 300,000 called up during the autumn mobilization.

"The fact is that these 300,000 mobilized do not have enough weapons," Markov said. "When will they get the military technology? Putin also does not have the answer to this question."

According to Markov, who supports escalation, India and China's doubts have arisen because Putin did not win fast enough. "Privately they say, 'Win quicker, but if you can't win, we can't build good relations with you,'" he said. "You should either win or admit your loss. We need most of all for the war to end as fast as possible."

Others said the reason for the tepid relations with India and China's leaders was because they were clearly more worried about further escalation. "We hear there is a worry about the prospect of escalation to the nuclear level," the longtime member of Russian diplomatic circles said. "And here, it seems to me everyone spoke very clearly that this is extremely undesirable and dangerous."

Inside Russia, every now and then, members of the liberal-leaning elite are voicing their growing concern.

In an interview last week with Russian daily RBK, Mikhail Zadornov, chairman of Otkritie, one of Russia's biggest banks, who served as finance minister from 1997 to 1999, noted that Russia had lost markets in the West that it had been building since Soviet times. "For 50 years, a market, mutual economic connections, were being built. Now they are destroyed for decades to come," Zadornov said.

On the whole, members of Russia's economic elite "understand this isn't going to end well," the Russian billionaire said. Prokopenko, the former Central Bank official, said the Russian elite, including many under sanctions, are watching the situation in horror: "Everything they built collapsed for no reason."