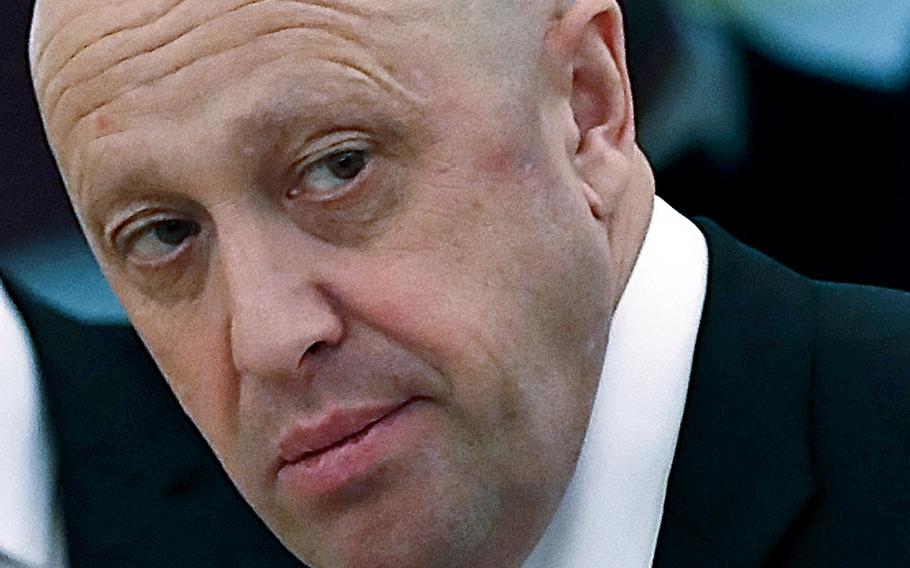 Russian businessman Yevgeny Prigozhin attends a meeting at the Kremlin in Moscow, Russia, on July 4, 2017. The White House said Thursday, Dec. 22, 2022, that the Wagner Group, a private Russian military company that Prigozhin owns, has taken delivery of an arms shipment from North Korea to help bolster its forces as it fights side-by-side with Russian forces in Ukraine. (Sergei Ilnitsky/Pool via AP)

North Korea has sold, and delivered, infantry rockets and missiles directly to Russia’s Wagner mercenary group, a private army controlled by a close confidant of President Vladimir Putin’s that is playing an increasingly critical role in the war in Ukraine, the Biden administration said Thursday.

Wagner forces have been particularly active in and around the city of Bakhmut, in eastern Ukraine, where the front line has barely moved in months of heavy fighting and where they are suffering heavy casualties, John Kirby, the communications coordinator for the National Security Council, told reporters.

As Russia’s armed forces have faltered on the battlefield, the United States estimates that Wagner has 50,000 troops in Ukraine, 40,000 of whom are convicts taken directly from Russian prisons. Wagner officials, including Yevgeniy Prigozhin, the founder and controller of the group, “have been traveling to Russian prisons recruiting convicts to fight on the front lines,” including “prisoners with serious medical conditions,” Kirby said.

“Wagner is playing a major role in Bakhmut, where its ill-equipped and ill-trained forces are suffering heavy casualties,” he said. “Approximately 1,000 Wagner fighters have been killed in the fighting in recent weeks, and 90 percent of those fatalities were convicts.”

The White House alleged last month that the North Korean government was covertly funneling artillery shells to Russia, using countries in the Middle East and North Africa to mask the movement of materiel, although it was not clear at the time whether those shipments had been received.

Kirby indicated that the sale and delivery of North Korean missiles to the Wagner group for use in Ukraine was a separate transaction. “Putin is increasingly turning” to the mercenary force “for military support,” he said, estimating that Prigozhin was spending “more than $100 million per month to fund” operations there.

“In part because of our sanctions and export controls, Wagner is searching around the world for arms suppliers to support its military operations in Ukraine,” he said. “We can confirm that North Korea has completed an initial arms delivery to Wagner, which paid for the equipment.”

The United States has assessed that the initial delivery of weapons is not likely to “change battlefield dynamics” in Ukraine, “but we are concerned that North Korea is planning to deliver more military equipment to Wagner,” Kirby said.

North Korea has publicly said it would not support Russia’s war in Ukraine. The Biden administration plans to raise what Kirby called “direct violation” of resolutions at the U.N. Security Council. The United States and its allies have made similar allegations about Iran, which they say has sold hundreds of self-destructing drones that have been used in Ukraine and plans to begin supplying ballistic missiles.

Wagner mercenaries were in the forefront of Russian troops that took over Crimea and assisted separatist forces in eastern Ukraine in 2014. They have also been active in West Africa and the Central African Republic.

Wagner is already on a U.S. trade blacklist, and the Commerce Department this week added new end-user restrictions designed to ensure that the group “will not be able to get their hands on equipment anywhere in the world that is based on [U.S.] technology or our production equipment,” Kirby said.

It is not the first time that the group, and Prigozhin, have been accused of gathering recruits among Russian convicts. Last summer, Vladimir Osechkin, head of the Gulagu.net human rights group that tracks recruitment efforts among prisoners, reported that Prigozhin, during personal appearances at a number of penal colonies, had offered convicts a presidential pardon if they were willing to fight in Ukraine.

While the mercenary group has long been considered especially ruthless and better-equipped and trained than Russian military recruits, recent reports from Bakhmut have noted a falloff in their preparation and capabilities.

Prigozhin, a billionaire whose relationship with Putin stems from his ownership of a St. Petersburg restaurant Putin once frequented and a catering company with lucrative government contracts, has been playing an increasingly public and important role in Russia’s war effort. The Washington Post reported in October that he confronted Putin personally to criticize mismanagement of the war effort by the Russian Defense Ministry, led by Sergey Shoigu.

At a meeting with top defense officials in Moscow on Wednesday, Putin publicly criticized the military and ordered upgrades in training and equipment.