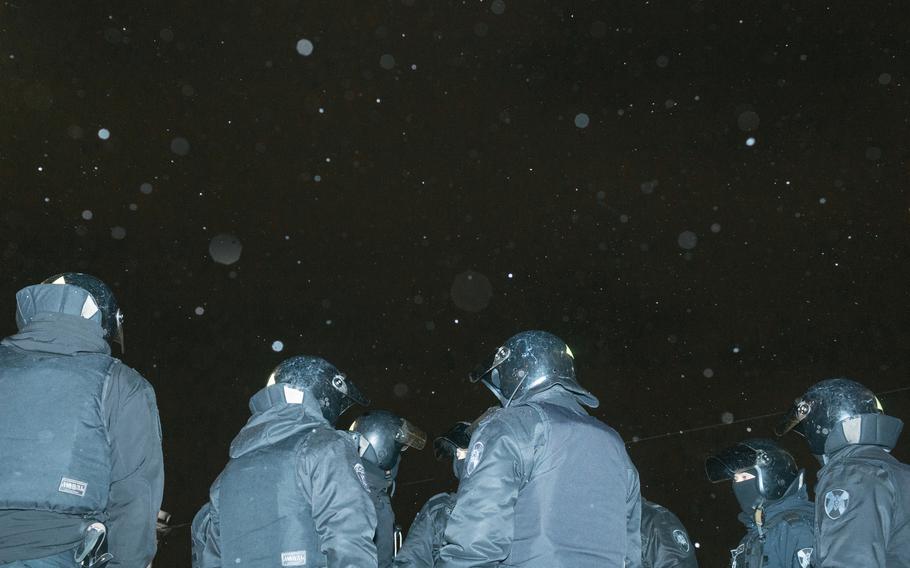 Police in St. Petersburg, Russia, during antiwar protests on Feb. 25, 2022. (The Washington Post)

RIGA, Latvia — After nearly 10 months of referring to the invasion of Ukraine as “a special military operation,” Russian President Vladimir Putin on Thursday called it a “war” for the first time, setting off an uproar among antiwar Russians who have been prosecuted for merely challenging the Kremlin-approved euphemism.

“Our goal is not to spin this flywheel of a military conflict but, on the contrary, to end this war,” Putin said during a televised news conference following a government meeting Thursday. “This is what we are striving for.”

Exactly what Putin has been striving for has been a subject of much consternation and debate, especially in Ukraine, where thousands have been killed and cities have been flattened, and in Western capitals that have sent billions in weapons and economic aid to Kyiv to help the country withstand Russia’s aggression.

Putin has alternately said that he is seeking to “denazify” Ukraine, to “liberate” Russian-speaking regions in the southeast of the country and to stop NATO countries, especially the United States, from trying to destroy Russia. He has denied wanting to conquer the country and topple the government, an assertion undermined by his failed effort to invade and occupy Kyiv.

What Putin had not said until Thursday was that the fighting in Ukraine, whatever the goal, is, in fact, a “war.”

Putin used the term “special military operation” in his early-morning announcement on Feb. 24, the day his full-scale invasion began. It seemed be an effort to stress that what was about to unfold would not drastically affect the lives of ordinary Russian. Instead, he sold the idea of a limited operation conducted by a small number of professional soldiers.

After several days of antiwar protests in Russia and critical coverage in the last few remaining independent media outlets, the Russian authorities rushed to suppress criticism and effectively mandate the use of “special military operation” by passing laws to prohibit “spreading fakes” and “discrediting” the army, which essentially made it illegal to call the war a “war.”

Mass protests were crushed, and many Russians fled the country fearing prosecution. The few remaining activists who took to the streets to do solo pickets were immediately swept away by the police and fined, even some who held up blank pieces of paper.

By October, Russian law enforcement had initiated nearly 5,000 administrative cases based on the new laws, meaning the defendants were probably given hefty fines. And there were more than a hundred criminal cases in which those prosecuted faced sentences of up to 15 years in prison.

In early December, one opposition politician, Ilya Yashin, was sentenced to eight years and six months in prison on charges of “spreading false information” after he dissected Russian atrocities in the city of Bucha, near Kyiv, in an effort to debunk the official Kremlin line that those reports were staged or fabricated to smear Russia.

Yashin’s sentence was the harshest to date under the new laws. In July, Moscow municipal lawmaker Alexei Gorinov was sentenced to seven years in prison on similar charges after he opened a public meeting with a moment of silence for those dying in the war.

On Thursday, critics of Putin and his war reacted furiously to the president’s utterance of the word.

“Alexei Gorinov was sentenced to seven years for calling the war a war at a meeting of the council of deputies,” tweeted Georgy Alburov, an exiled ally of the jailed Russian opposition leader Alexei Navalny. “Vladimir Putin today also publicly called the war a war at his workplace. So either release Gorinov or put Putin in jail for seven years.”

Most independent media have been forced out of the country, and hundreds of thousands of Russians fled what the Kremlin called “a partial mobilization” that disrupted Putin’s promise of a swift and successful war that wouldn’t affect the livelihoods of civilians.

The laws have been enforced selectively to target longtime Putin critics, while pro-war hawks and state television propagandists are allowed to criticize Russian military commanders for heavy battlefield losses and use the word “war” without penalties.

Nikita Yuferev, a municipal lawmaker from St. Petersburg who fled the country for his antiwar views but can still perform the official duties of his mandate remotely, said on Thursday that he had written a complaint against Putin, asking Russia’s prosecutor general to investigate the president’s statement.

“There was no decree to end the special operation, and no war was declared,” Yuferev tweeted. “Several thousand people have already been prosecuted for such words about the war, so I’ve sent a request to the authorities to charge Putin with spreading fakes about the army.”

The move is symbolic and will not be acted upon by law enforcement. But it underscores how selective prosecution has become the norm in the Russian judicial system under Putin’s rule, with different standards in place for citizens depending on their level of support for the president.

Pro-war Russian commentators have been permitted to level withering criticism at the Russian military and its commanders over battlefield losses and other missteps, including a botched mobilization of 300,000 new soldiers.

In his remarks Thursday, Putin dismissed the U.S. decision to supply Ukraine with its most advanced air defense weapon, the Patriot missile system, which was formally announced by President Biden during Ukrainian President Volodymyr Zelensky’s visit to Washington on Wednesday.

Putin described the move as an insignificant development. “Patriot is a rather old system and does not work like our S-300,” he said, referring to Russia’s mainstay air defense system. “We’ll just keep it in mind and there will be an antidote,” Putin said. “We’ll knock down Patriots.”

Putin on Thursday also repeated his oft-made assertion that the United States and NATO were responsible for the conflict in Ukraine, saying, “It all started in 2014 after the coup d’etat provoked by the United States.”

Asked whether he felt the “operation” has been going on too long, Putin replied with a Russian idiom about how big goals are achieved little by little — the latest sign he has no plan to end the war that he is now willing to call a war. “The intensification of hostilities leads to unjustified losses,” Putin said. “And as they say, ‘the hen pecks grain by grain.’”