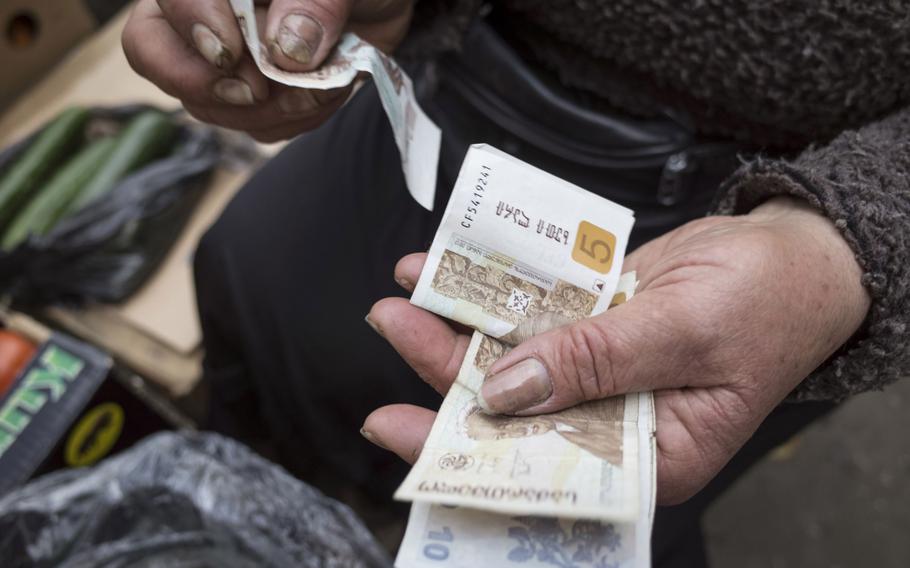 A market trader counts lari banknotes at a stall in Tbilisi, Georgia, on April 15, 2014. (Vincent Mundy/Bloomberg)

The Russian exodus triggered by Vladimir Putin’s invasion of Ukraine has put the currencies of former Soviet republics at the top of global rankings this year.

Georgia and Armenia in the Caucasus mountains, as well as Tajikistan in Central Asia, are among the best performers against the U.S. dollar after tens of thousands of Russian citizens settled there since February, bringing the equivalent of billions of dollars in savings with them.

The small countries make appealing boltholes because no travel visas are required, Russian is widely spoken, and there are no restrictions on moving savings to local banks.

That’s driven Armenia’s dram up 22% against the dollar since the start of the year, the top gainer among currencies worldwide, data compiled by Bloomberg show. Georgia’s lari and the Tajik somoni are stronger by more than 16% and 10%, respectively, beating the gains for Russia’s ruble, which is no longer a freely traded currency since emergency capital controls put a floor under its collapse.

“It’s Russians, moving to these countries for a long time due to geopolitical issues, who keep their money in such currencies and push up the exchange rate,” said Natalia Milchakova at Freedom Holding Corp.

The war explains the fivefold increase in remittances entering Georgia from Russia so far this year, equivalent to more than 60% of all transfers and exceeding $1.75 billion, according to the National Bank of Georgia. Money transfers to Armenia amounted to $2.8 billion in the first ten months, a near-quadrupling compared with the same period of 2021. In October, they hit the highest level since at least 2004, the Armenian central bank said.

At the same time, the currency impact from the waves of Russian arrivals is bigger in the smaller ex-republics. Kazakhstan, whose population of 19 million is around 6 times that of Armenia and Georgia, has also received Russian inflows — but the tenge is on track to end the year with a loss of more than 7% against the dollar.

The economic gains weren’t a given at the start of the war, and Russia’s neighbors were expected to suffer as their biggest trading partner buckled under international sanctions. In reality, the enormous capital inflows have boosted their foreign exchange reserves and improved their current account balance. Armenia’s economy expanded in double digits in the second and third quarters, while Georgia’s economy posted almost 10% growth in the three months through September.

For Tajikistan, money transfers surged at least 50% in the first half of the year, said Natalia Lavrova of BCS Financial Group, citing balance-of-payment data. That’s put the landlocked nation’s economy on track to expand 7% this year, compared with earlier predictions for 4-5%, she said.

The International Monetary Fund raised Georgia’s full-year economic growth forecast to 10%, pointing to “a surge in immigration and financial inflows triggered by the war.” Meanwhile, Armenia’s central bank lifted its GDP growth forecast to 13% from 4.9% due to the influx of Russians, local media reported, citing Governor Martin Galstyan.

“The sharp increase in remittances certainly explains such rapid growth,” BCS’s Lavrova said. In both Armenia and Georgia, the money transfers fed through into increased consumer demand and housing construction, she said.