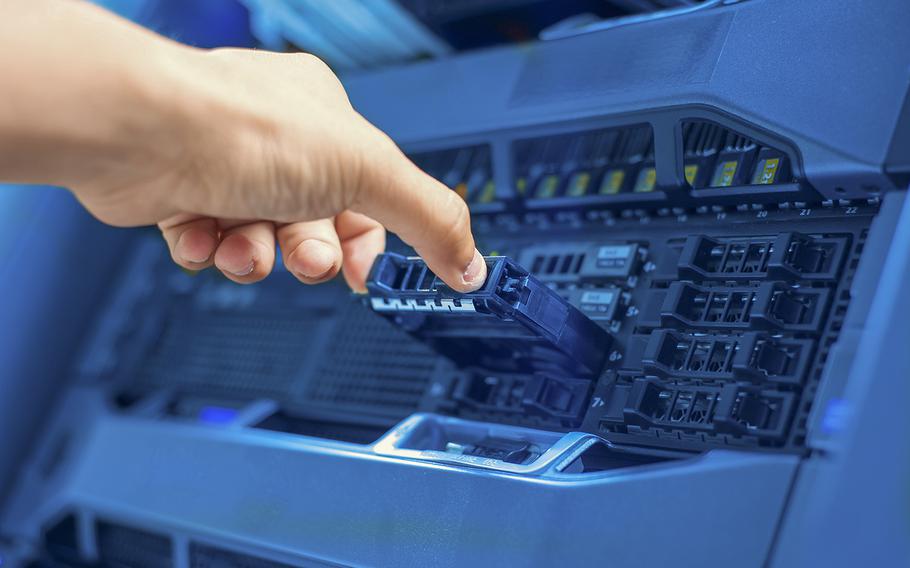 Since the day Russia launched its invasion Feb. 24, 2022, Amazon has been working closely with the Ukrainian government to download essential data and ferry it out of the country in suitcase-sized solid-state computer storage units called Snowball Edge. (Dreamstime/TNS)

Since Februrary, Amazon has been playing Santa Claus to the Ukraine, delivering planeloads of goods, including blankets, hygiene kits, diapers, food, and toys, for the war-torn nation and refugees in Poland and other parts of Europe.

But long term, what's more important to Ukrainians than the gifts coming in is what's going out: massive amounts of government, tax, banking and property data vulnerable to destruction and abuse should Russian invaders get their hands on it.

Since the day Russia launched its invasion Feb. 24, Amazon has been working closely with the Ukrainian government to download essential data and ferry it out of the country in suitcase-sized solid-state computer storage units called Snowball Edge, then funneling the data into Amazon's cloud computing system.

"This is the most technologically advanced war in human history," said Mykhailo Federov, Ukraine's 31-year-old vice prime minister and minister of digital transformation, referring not just to weapons, but data, too. "AWS's leadership made a decision that saved the Ukrainian government and economy."

Amazon's Ukraine effort, including data transfer via the "Snowballs," as they're called, has cost about $75 million so far. Federov, speaking at a tech conference in Las Vegas earlier this month, called it "priceless."

The data, 10 million gigabytes so far, represent "critical information infrastructure. This is core for operation of the economy, of the tax system, of banks, and the government overall," he said. The data also include property records whose safekeeping can help prevent theft of Ukrainian homes, businesses, and land.

Through history, invaders have "come in and staged fake referendum and parceled out the land to their chums," said Liam Maxwell, head of government transformation at Amazon Web Services (AWS), the company's highly profitable cloud computing arm. "That kind of thing has been happening since William the Conquerer."

The Odessa Journal newspaper reported last June that residents of occupied Mariupol whose homes had been destroyed were being moved into the homes of citizens who had fled the area, and were being forced to locate those who left and pressure them to "cooperate" in some fashion with the Russians.

Maxwell, who's based in London, had already working with Ukraine for years when it became clear by January 2022 that Russia planned to attack the country.

At the time, Ukrainian law required the majority of government data and certain private data to be housed on servers in Ukraine. In February, parliament changed that law to allow the information transfer.

On Feb. 24, the day of the invasion, Maxwell met for lunch with Ukraine ambassador Vadym Prystaiko at the Ukraine Embassy in London.

The Snowball units, in their ruggedized gray containers, were flown from Dublin to Krakow in Poland. Then the Ukrainians "spirited these devices over the border into the Ukraine," Maxwell said.

After the data downloads, much of the information is sent to the cloud over secure networks, and the Snowballs, loaded with up to 80 terabytes of encrypted data each, are shipped back to Amazon. For good reason, Maxwell doesn't want to say where, but says "it's a tense moment around the baggage carousel. Here's government in a box, literally."

Once it's in the cloud and distributed around the world, everyone breathed easier. "You can't take out the cloud with a cruise missile," Maxwell said.

The mission required speed, organization, and deep technical skill. Maxwell said Federov, "a man in a hurry," ticked all the boxes.

Still, Amazon spent time training the Ukrainians on how the AWS system works. That free training has been extended to refugees in Poland and in other locations in Europe. There's an upside for Amazon, in addition to recognition for its efforts: Maxwell notes that the program is equipping those refugees with crucial tech skills — and in the process expanding AWS's talent base.

Amazon didn't have to worry about its relationship with Russia on the Snowball project. It doesn't have one. "We didn't have anything to turn off there," Maxwell said. "We had never invested there. It's a point of principle."

Since the project began, other countries have told Amazon they're interested in out-of-the-country cloud backups of government data. Maxwell wouldn't say which countries but noted keen interest from East Asia.