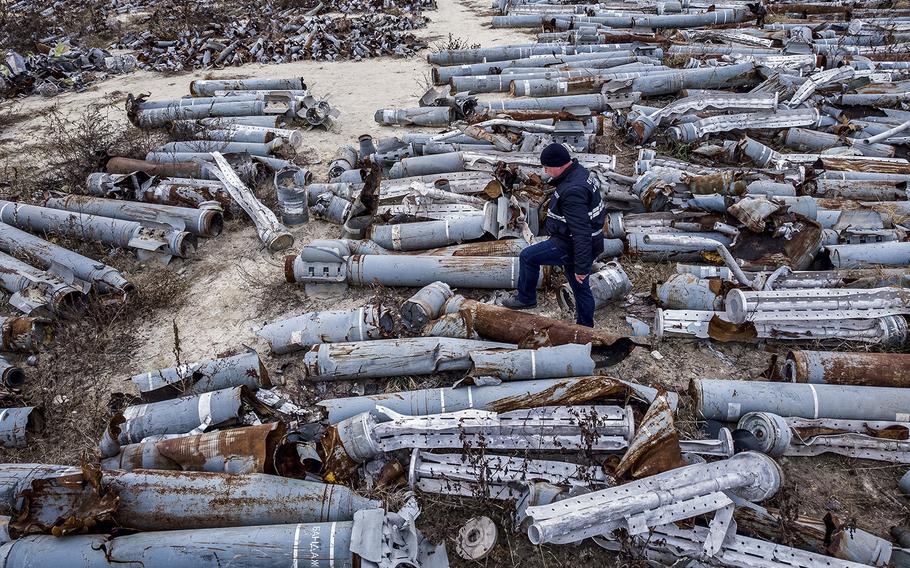 Collected remnants of shells and missiles used by the Russian army to attack Kharkiv, Ukraine, are examined on Dec. 7, 2022. (ALEKSEY FILIPPOV/AFP via Getty Images/TNS)

The strikes at three airfields, including ones used on bombing missions against Ukraine's civilian infrastructure, boosted morale among Ukrainians enduring electricity and water outages in winter under repeated missile barrages. Kremlin threats of escalation in response have proven empty, at least so far.

Yet U.S. and European sympathy for Ukraine in wanting to hit back at attempts to freeze its population into submission is matched by anxiety over Putin's red lines for resorting to his nuclear arsenal if attacks on Russian soil continue. That makes them reluctant to offer encouragement to Kyiv, still less weaponry with a range permitting far-reaching strikes into Russia, even as Putin's invasion increasingly falters on the battlefield.

"We have been very clear about our concerns over potential escalation," U.S. National Security Council spokesman John Kirby told reporters Wednesday, in answer to a question on whether Washington was discouraging Ukraine from strikes inside Russia. "It's their decision to make. We have not encouraged them to do that."

Putin warned on Wednesday that the threat of nuclear war is rising in the world. He stopped short of pledging that Russia won't be first to use atomic weapons, while calling them a "deterrent factor" in conflicts.

"We won't brandish them like a razor, running around the world, but we of course proceed from the fact they are there," he told a meeting of his Kremlin human rights council.

In keeping with past practice when sensitive Russian targets were hit, Ukraine hasn't publicly claimed responsibility for attacks that damaged two strategic bombers on Monday at military bases in the Saratov and Ryazan regions at least 310 miles from the border between the two countries. A drone hit a third airfield Tuesday in Kursk, about 100 kilometers from Ukraine.

"It's clear that the incidents that lead to a weakening of Russia's offensive potential fit the interests of Ukraine," said Mykola Bielieskov, a research fellow at the National Institute for Strategic Studies, a government think tank in Kyiv. Damage to Russia's long-range strike capability "reduces the potential of Moscow to conduct a campaign to destroy Ukrainian energy infrastructure," he said.

The Biden administration has provided Ukraine with increasingly sophisticated weapons, including HIMARS multiple-launch rocket systems that have proved devastating against Russian supply routes and ammunition dumps far behind the front lines in occupied territory. But officials have balked at sending the Army Tactical Missile System, known as ATACMS, requested by Ukraine because its range would allow targets inside Russia to be hit.

Ukraine is "trying to puncture Russian morale which is already low and boost the morale of its own population," said Natasha Kuhrt, a senior lecturer in international peace and security in the Department of War Studies at King's College, London. "It will definitely be increasingly difficult for the West to refuse to send longer range missiles to Ukraine."

Russia has previously blamed Ukraine for a series of blasts at military facilities in Crimea, which Putin annexed in 2014. Russian state TV on Monday showed Putin driving along a flagship bridge linking Russia to Crimea across the Kerch Strait to inspect repairs to damaged road and rail links following an explosion in October. Ukrainian President Volodymyr Zelenskyy has denied Ukraine attacked the bridge.

Zelenskyy met with top Ukrainian army commanders on Wednesday to discuss the supply of weapons to its forces and "next steps to reduce the combat capabilities" of Russia's military, according to a statement from his office.

The latest strikes show that Ukraine can operate at will in Russia which will worry the Kremlin, said western officials, asking not to be identified discussing sensitive issues. While there are concerns about escalation, Ukraine focused on legitimate military targets in contrast to Russia's indiscriminate attacks.

Russia unleashed a wave of air- and sea-launched missiles against energy and communications infrastructure in Ukraine after Monday's attacks. The Defense Ministry in Moscow said Ukraine had used modified Soviet-era drones against its bases.

The Russian military "will need to rethink its defensive posture much further from Ukraine's borders as a result of these strikes," said Mick Ryan, a defense strategist and retired Australian army general. "There are many airfields, command hubs and logistics much closer to Ukraine" which Kyiv's forces can "now hold at risk."

Ukraine will probably develop more long-range strike capability even without help from its allies, he said.

The strikes are a psychological blow for the Kremlin, said a Moscow-based military analyst, asking not to be identified because authorities have outlawed criticism of the Russian army's actions. Still, without advanced long-range weaponry, Ukraine won't be able to step up attacks inside Russia to make it a game changer in the war, the expert said.

Divisions over Ukrainian retaliation against Russia for attacks on its critical infrastructure were on display when foreign ministers of North Atlantic Treaty Organization states gathered in Romania last week.

Latvian Foreign Minister Edgars Rinkevics said allies should allow Kyiv "to use weapons to target missile sites or air fields from where those operations are being launched." Italian Foreign Minister Antonio Tajani said "We are against an escalation of the conflict."

The U.S. has "neither encouraged or enabled the Ukrainians to strike inside of Russia," Secretary of State Antony Blinken told reporters Tuesday. "But the important thing is to understand what Ukrainians are living through every day with the ongoing Russian aggression against their country."