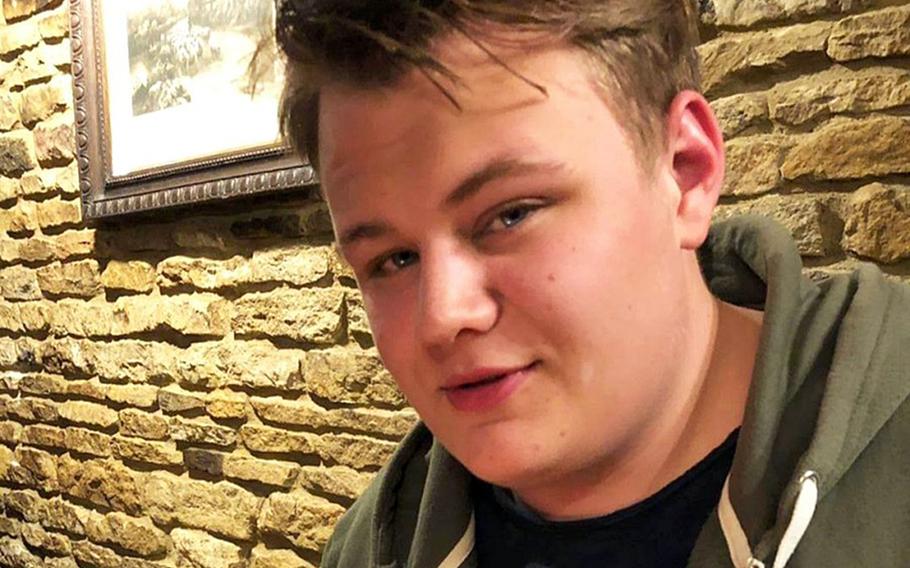 A photo of Harry Dunn, the British teenager killed in a 2019 traffic accident, from the Justice4Harry Facebook page. (Facebook)

The case created a rift between the United States and Britain, because Sacoolas — who was married to a U.S. intelligence official and may have been one herself — was whisked out of the country three weeks after the crash, with the U.S. government claiming diplomatic immunity for her and refusing Britain’s extradition request.

Negotiations between the parties led to the United Kingdom’s first case where the defendant participated via video link in lieu of extradition. But while the case was unprecedented, its many particularities make it unlikely to be precedent-setting.

In the courtroom on Thursday, Sacoolas’s British attorney, Ben Cooper, offered a statement from his client that apologized for her “tragic mistake.”

“I live with this regret every single day. There is not a day that goes by that Harry isn’t on my mind, and I am deeply sorry for the pain that I have caused,” the lawyer read, according to reporters inside the courtroom.

Justice Bobbie Cheema-Grubb criticized Sacoolas for not appearing in person for her sentencing, saying there was “little reason” for her not to show up at the Old Bailey.

Sacoolas’s lawyer said she had not sought diplomatic immunity — suggesting that it was the U.S. State Department that had intervened.

Harry Dunn’s mother, Charlotte Charles, went into the witness box and said, “I have been shaken to the point of breaking. I made a promise to Harry in the hospital that we would get him justice and a mother never breaks a promise to her son. I just want to wrap my arms around him.”

As soon as she began to speak, Sacoolas, watching remotely, wiped her eyes, according to reporters in the courtroom.

She will not be required to go to jail in the United States, but the British court could alter the sentence if she were involved in another fatal accident within the next 12 months.

Sacoolas had only recently moved to Britain when, on Aug. 27, 2019, she drove her Volvo SUV on the wrong side of a rural road for 20 seconds and collided with 19-year-old Dunn, who was on a motorcycle.

She was in the car with her children, returning home from an evening barbecue at 8:20 p.m. She hadn’t been drinking. She wasn’t speeding. She remained at the scene. She called for help. She cooperated with police.

On Thursday, prosecutor Duncan Atkinson said that after the “horrific” accident that Sacoolas appeared in shock, grasping her head in her hands after she realized what she had done. Her vehicle’s air bags had deployed.

The victim lay on the roadside and begged a first responder, “don’t let me die.”

Three weeks after the crash, she fled the country and returned home to northern Virginia, while U.S. officials claimed diplomatic immunity on her behalf.

Early reports referred to her as a “diplomat’s wife” and said her husband, Jonathan Sacoolas, had been serving as a U.S. intelligence officer, stationed at the Royal Air Force base at Croughton.

The intrigue deepened at the U.S. District Court in Alexandria, Va., last year, when her lawyer asserted that both Sacoolases were “employed by an intelligence agency of the United States, and that’s why she left.”

Dunn’s grieving parents were outraged that she had fled justice. The case was taken up by British tabloids. And Prime Minister Boris Johnson said he hoped Sacoolas would return to Britain to face justice.

Then, in October 2019, Charlotte Charles and Tim Dunn found themselves invited to the White House to meet with President Donald Trump.

They said they would have met with anyone at that point willing to help. But showman Trump has his own way of doing things.

While they were in the Oval Office, he surprised Dunn’s parents by telling them that Sacoolas was in the next room and willing to meet. “He said, ‘Let’s get some healing,’” Charles recounted in an interview with The Washington Post. They didn’t want any part of it, insisting that the case get worked out within the British justice system.

But how to prosecute Sacoolas? The British government requested extradition. The Trump administration said no.

President Biden would also be swept up in the case. His administration said early in his term that it would not revisit extradition for Sacoolas. But Johnson said he raised it with Biden in June 2021, during a Group of Seven summit in Britain.

Biden, whose first wife and daughter died in a car crash, expressed “a great deal of sympathy,” Johnson said. But the American president ultimately remained unswayed.

When Sacoolas pleaded guilty this fall — to a lesser charge of “causing death by careless driving” — she did so via videolink from the United States.

While defendants in criminal cases in Britain have been allowed to appear via video, especially during the pandemic, most of them have done so from within prisons.