As Ukraine and Russia step up prisoner exchanges, scarred POWs tell of abuse A freed Ukrainian prisoner of war and the wives of fellow soldiers who are still detained, on Tuesday. (Anastasia Vlasova/for The Washington Post)

NORTHEAST UKRAINE — The 60 prisoners of war arrived on Ukrainian soil Tuesday afternoon — free after the latest trade between Moscow and Kyiv, but still under strict rationing.

The nurses treating them at a hospital in northeast Ukraine were instructed to give each soldier no more than 300 milliliters of chicken soup, or about 20 tablespoons. Many were so malnourished during Russian captivity that they would be unable to digest more that, the hospital director said.

The POWs who arrived here, at a location that military authorities asked not be disclosed for security reasons, were a reminder that in addition to the thousands killed in action in Russia’s war in Ukraine, and tens of thousands more wounded, there is yet a third category whose fate is often far murkier and about whom often far less is known.

Although they are supposed to be protected by the Geneva Conventions, which require humane treatment, the prisoners’ physical condition — protruding shoulder blades and ribs, bandaged limbs, long scars — bore evidence of abuse from their months of imprisonment in addition to injuries from combat.

“Tasers, currents — they beat us with clubs; they beat us with sticks. I said goodbye to my life there more than once,” said Vitalii, whose surname and military unit The Washington Post is not identifying for security reasons.

“There were such beatings that I could not stand them,” Vitalii said. “My ribs were broken; my kidney was beaten off, it was lowered,” he said, adding that he urinated blood for 10 days with no medical attention after his kidneys were hurt. Hospital workers collect the clothes of freed Ukrainian prisoners of war, to be sent for analysis as potential evidence of war crimes. (Anastasia Vlasova/for The Washington Post)

Vitalii and many of the other soldiers had been captured by Russian forces in late May in Mariupol, where they were among the last troops defending the Azovstal steel plant in one of the war’s bloodiest battles.

Standing on the hospital’s second floor in clean underwear, Mykola, 39, said the troops were subjected to beatings, electric shocks and suffocation with bags over their heads. The Post is identifying him only by first name for security reasons.

Mykola and his fellow soldiers had just taken off the clothes from their imprisonment, which were immediately sealed in yellow biohazard bags to be sent for inspection for evidence of war crimes.

The released POWs came from numerous units, including the 1st Severus Tank Brigade, the 1st Marine Battalion and the 53rd Mechanized Brigade.

“So many ways to loosen a person’s tongue,” Mykola said, describing the Russians’ brutal interrogation techniques. “They hanged us in handcuffs.” 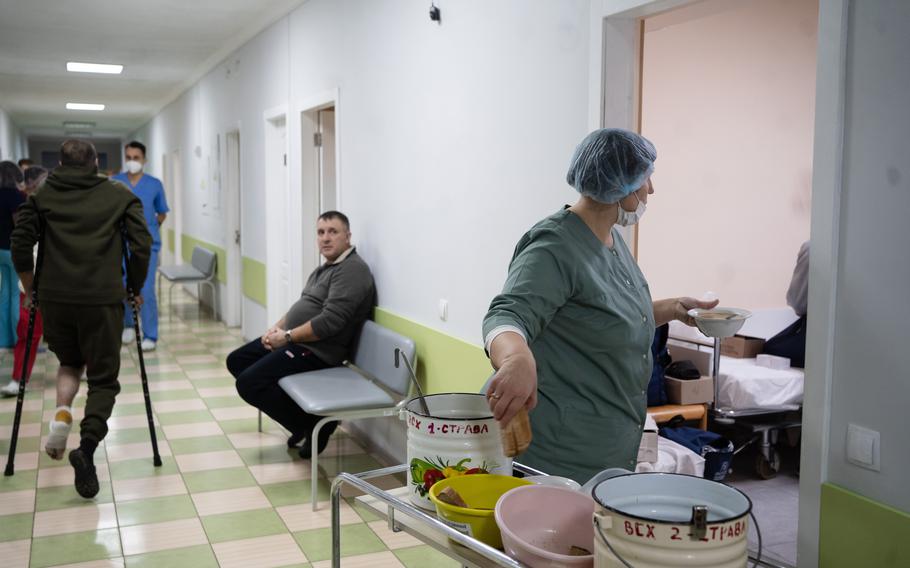 A nurse brings food to Ukrainian soldiers who were released in a prisoner exchange Tuesday. (Anastasia Vlasova/for The Washington Post)

With combat now grinding at a slower pace, in part because of pre-winter mud, and with prospects of a peace deal as remote as ever, Ukraine and Russia have ramped up prisoner exchanges in recent weeks — a recognition, at least, of what is arguably the lowest common denominator of mutual interest in wartime.

Since September, 817 Ukrainian prisoners have been released — a sharp jump compared with the 574 released during the first six months after Russia’s invasion, according to Andriy Yusov, a spokesman for Ukraine’s coordination headquarters for the treatment of prisoners of war.

The releases are being greeted with joy and celebration by soldiers’ families and friends, and provide a glimmer of hope for many more whose loved ones are still imprisoned or missing. The swaps also show that a line of communication exists, providing a potential framework — theoretically, at least — for future talks and cooperation.

But for all the comfort the exchanges bring to families, and to commanders responsible for captured comrades, experts caution that the rising number of POWs being freed could be an ominous sign about the war’s direction.

David Silbey, a defense and military policy analyst at Cornell University, said the moves to offload prisoners might reflect struggles by Russia and Ukraine to maintain their supply chains and adequately provide food and shelter to their own troops, let alone to enemy prisoners. 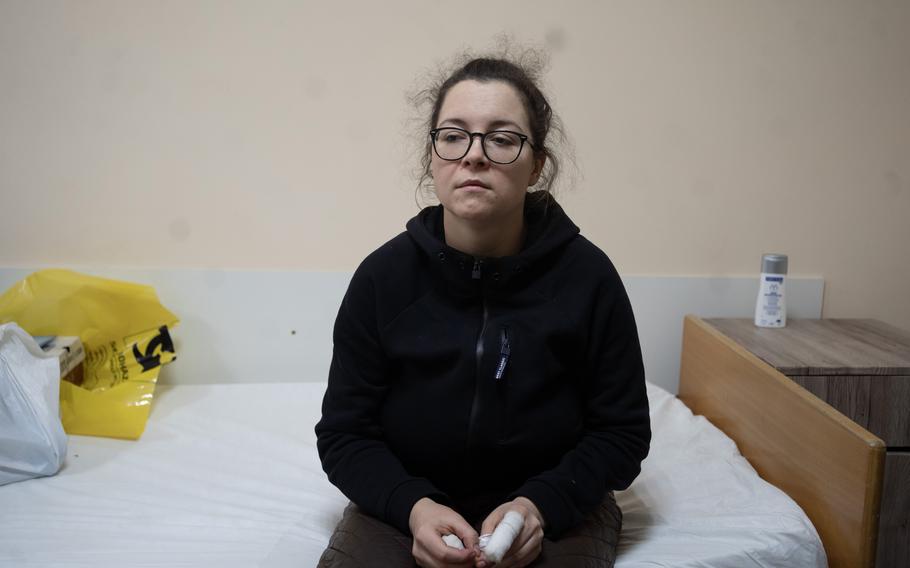 Kateryna Skopina, a freed prisoner of war, during an interview after her release Tuesday. (Anastasia Vlasova/for The Washington Post)

“Especially when resources are running as low as they are, that extra mouth is pretty costly,” Silbey said. “The Russians in particular have so many logistical issues, and trouble feeding their own troops — you add winter into all this, and you get a much more difficult situation.”

For each side, Silbey said, holding prisoners is a potentially avoidable economic and logistical burden. Russia’s economy has been hit hard by Western sanctions, while Ukraine’s economy has suffered from a ceaseless Russian bombardment of its energy infrastructure.

“Both armies are trying to handle things in ways that are effective for them,” Silbey said. “And prisoners are not useful to militaries.”

Yusov, the Ukrainian spokesman, said officials have been working on the exchanges for months but confirmed that many more are happening now, in part because the number of POWs increases the longer the war goes on.

“Since September, the movement is greater, and in fact there are exchanges every week,” Yusov said. “Each exchange is prepared for a long time and often feels overwhelming,” he added. “This is complex, complex work.” 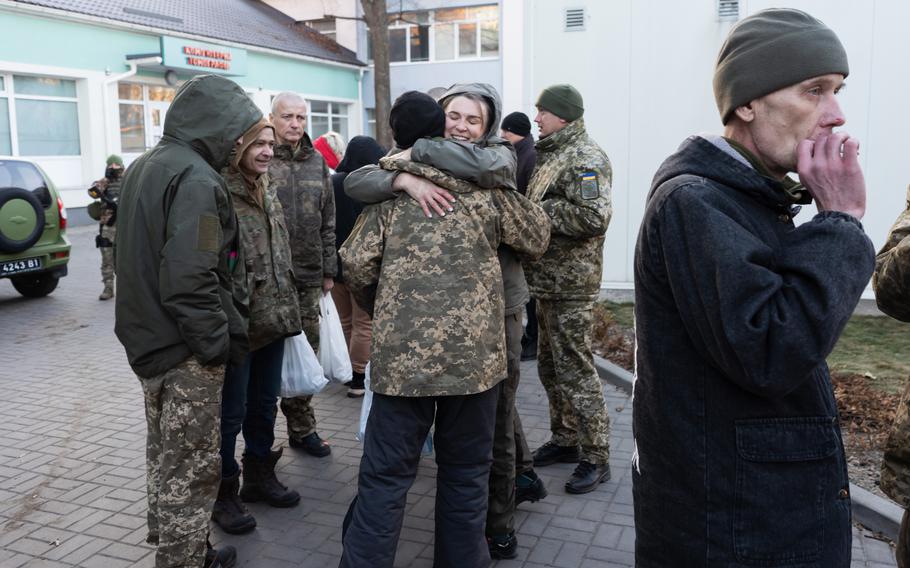 Ukrainian soldiers hug as they meet after being released in a prisoner exchange Tuesday. (Anastasia Vlasova/for The Washington Post)

The precise numbers of POWs on the Ukrainian and Russian sides remain unknown, as neither military discloses such data. It is even harder to assess how many are subject to physical or psychological torture.

The International Committee of the Red Cross says there are thousands of POWs and has demanded access to them, citing obligations in the Geneva Conventions.

United Nations officials have found evidence of torture and mistreatment of POWs by each side.

In a Nov. 15 report, Matilda Bogner, head of the U.N. human rights monitoring mission in Ukraine, found that the “vast majority” of former Ukrainian POWs had been subject to torture and ill-treatment, including beatings and sexual abuse. Documented incidents included violence using batons, hammers, electric shock, genital torture, sensory deprivation and hanging by the hands or legs.

Captured Russian soldiers also provided “credible allegations” of Ukrainian troops committing summary executions, Bogner reported, as well as “several cases of torture and ill-treatment.” Bogner emphasized that Ukraine had provided the monitoring mission with access to Russian POWs, while Russia refused. She also noted that Ukraine has pledged to investigate allegations of torture committed by its side.

The newly freed Ukrainians described brutal torture at the hands of their Russian captors. The Post could not independently verify the specific individual allegations of torture.

Kateryna Skopina, 31, and Tanya, 42, were released Tuesday after spending 239 days of imprisonment together. Tanya, who asked that her surname be withheld for security reasons, said she was jailed in an 11-square-foot cell with five other female prisoners.

She and Skopina recounted being physically abused by Russian guards, who said they were particularly incensed by any singing or talking in Ukrainian. Tanya said they threatened the women if they fixed their hair into traditional Ukrainian braids.

“Your face is heated on the stove, demanding some information that you know nothing about at all,” Skopina said. “It’s a mockery. To run to the toilet in three seconds, and at the same time the girls are being beaten with a stun gun, hit on the head.” 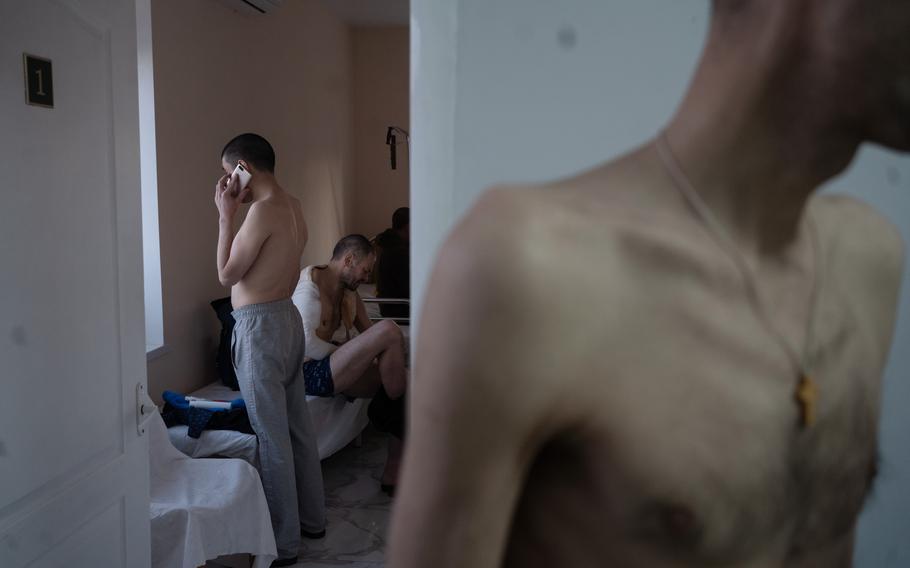 Freed Ukrainian prisoners of war at a hospital after their release in a prisoner exchange Tuesday. (Anastasia Vlasova/for The Washington Post)

As the soldiers upstairs were checked for lice and ticks, Tamara Kazimir, 44, waited downstairs with her friend Anna Tereschenko, 27. Their husbands had been captured by Russian forces and held since the spring, and the women learned Monday night that they would not be among those released.

Still, Kazimir and Tereschenko came to the hospital hunting for information before the soldiers boarded a bus to a rehabilitation center. Tereschenko has spoken to about 20 other former POWs, and joined Telegram channels with other women whose husbands are being detained. She last heard that her husband was sentenced to life in prison by a Russian military tribunal, but no one has reported seeing him since September.

“Every time I find out that it was not my husband who was exchanged,” Tereschenko said, “I always hope that someone saw him alive somewhere.”