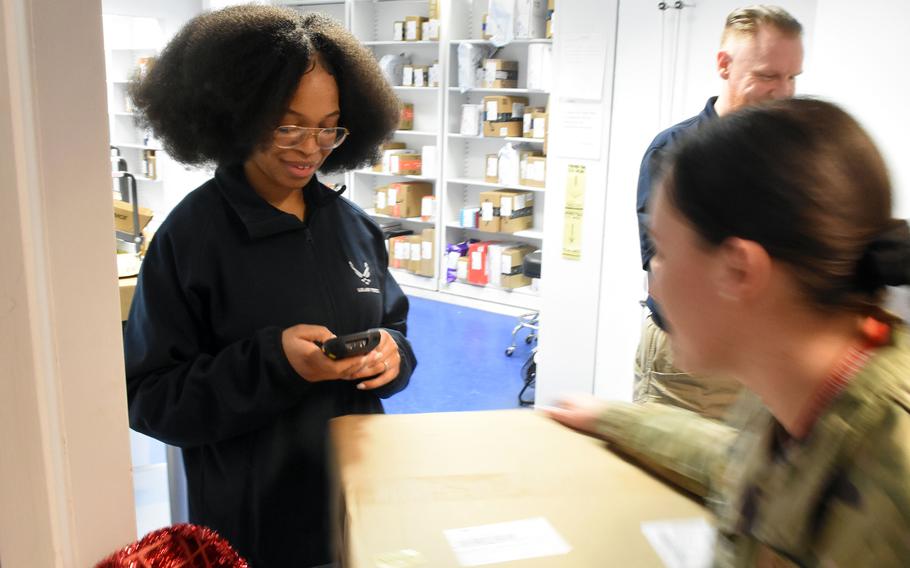 Senior Airman Erianna Weston scans a package for a service member at the Northside Post Office on Ramstein Air Base, Germany, on Monday, Dec. 5, 2022. Service members and their families stationed overseas are seeing an unusually high number of parcels from the United States returned to sender, adding more stress and uncertainty to ordering gifts for the holidays. (Jennifer H. Svan/Stars and Stripes)

U.S. Postal Service screening of parcels meant for service members overseas is driving an overwhelming number of complaints from military families about weekslong waits for holiday gifts, while other presents never arrive at all.

They say they are confounded and frustrated by messages from major global retailers that their packages were returned or refunded with little or no explanation; meanwhile, family members are having their gifts and well-wishes returned to sender after multiple tries.

Military officials say the increased screening is rejecting packages with vague descriptions on shipping labels, or those with older customs forms.

But customers have no control over whether giant retailers such as Amazon use simple descriptions like “toy” on their labels.

Meanwhile, family members in the U.S. who are sending mail ranging from books to underwear — with customs forms descriptions in scrupulous detail — say they are seeing their packages returned to them, commenters in overseas-based military Facebook groups are saying.

The change close to the holidays has many people worried that presents won’t arrive in time for Christmas, Hanukkah and other celebrations. 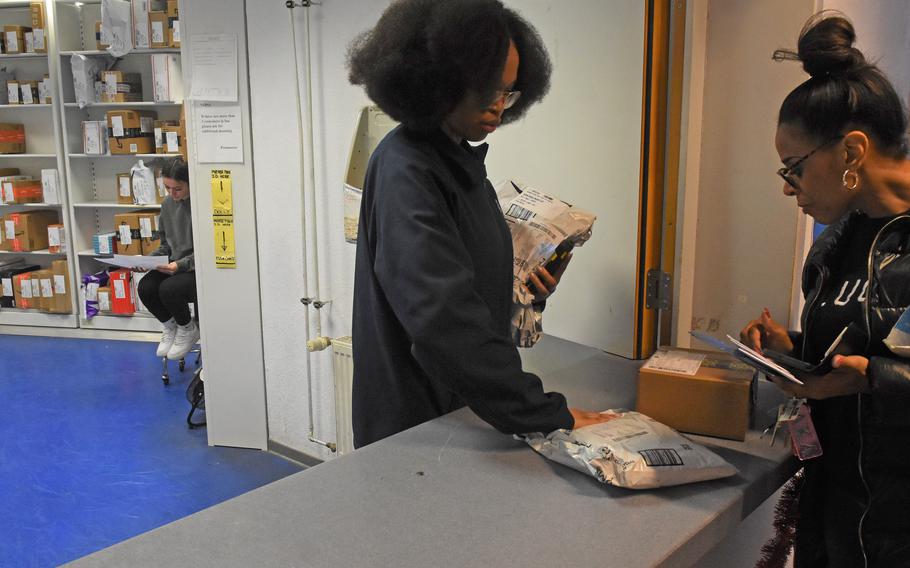 Senior Airman Erianna Weston makes sure a customer at the Northside Post Office on Ramstein Air Base, Germany, has the right packages. Service members and their families overseas are frustrated by an unusually high number of parcels mailed from retailers and family members from the United States being sent back. Items from clothing for children to greeting cards have been returned to sender, with families scrambling to get refunds. (Jennifer H. Svan/Stars and Stripes)

“It’s definitely starting to feel like the Grinch is stealing Christmas with getting so many packages rejected right before the holidays and companies now not wanting to mess with (Army or Air Force Post Office) addresses,” a comment last week on the U.S. Army Garrison Stuttgart Facebook page said.

It’s unknown how many families have been affected, but numerous complaints have been made by people in U.S. military communities with tens of thousands of people each, including in Germany, the U.K. and Japan. Official military social media pages have warned their audiences in recent weeks that more packages are being returned.

James Clawson, a postal operations specialist for U.S. Army Europe and Africa, said in a statement to Stars and Stripes on Friday that in mid-October, the Chicago International Military Service Center began screening for military parcels that don’t meet global trade compliance rules.

The USPS still hasn’t responded to a Stars and Stripes query on Thursday to a government relations assistant, asking for an explanation of these export regulations and why they’re being enforced now.

If the customs form is missing or dates from earlier than 2015, USPS will return the package to the sender, he said.

Vague descriptions of items or the presence of lithium batteries are other reasons an item can be returned, Clawson said in a statement.

However, customers say it’s anyone’s guess what level of description is sufficient. One member of the Kaiserslautern Military Community lamented that their father’s separate descriptions of a pajama shirt and pajama pants got returned to sender.

Another customer in Kaiserslautern marveled at the “household goods” description that got unicorn onesies through customs. 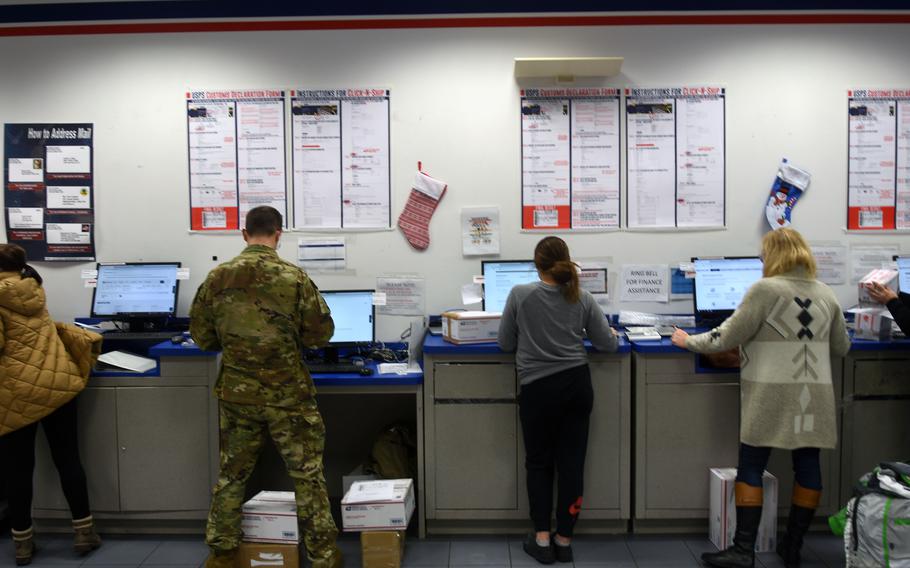 Customers fill out electronic customs forms at the Northside Post Office on Ramstein Air Base, Germany, on Monday, Dec. 5, 2022. Military officials say vague or outdated customs forms on parcels being mailed from the United States are reasons a higher than usual number of parcels are being returned to sender this holiday season. (Jennifer H. Svan/Stars and Stripes)

A Postal Service online document says only that it “requires electronic customs information on all mail items that bear a customs declaration” and that this applies to items mailed to overseas military and diplomatic post office addresses and nonmilitary U.S. possessions and territories, among other international locations. The information is dated October 2019.

The stricter screening practices are holding up packages with toys, T-shirts and household products. Customers also are reporting custom-order greeting cards from companies such as Shutterfly are getting sent back.

Yokota Air Base postal officials in Japan say there have been problems with third-party vendors that sell products through retailers such as Amazon and Walmart. Customers should contact those vendors and request a customs form be attached to a parcel, Yokota officials said in a Facebook post recently.

Sara Garrett, a Navy spouse in Stuttgart, has had several packages held up in customs.

A package with five T-shirts ordered in September from Fanatics was returned, she said. An Amazon package for children’s makeup she ordered in October also was returned.

She received a refund and picked out another gift. Her best guess is that maybe it was labeled a toy, she said, since Amazon packages tend to come with generic labels.

Garrett has lived overseas before but has never experienced this much trouble receiving packages from the U.S., she said.

“My concern is companies are going to stop mailing anything over here if this keeps up,” she said. 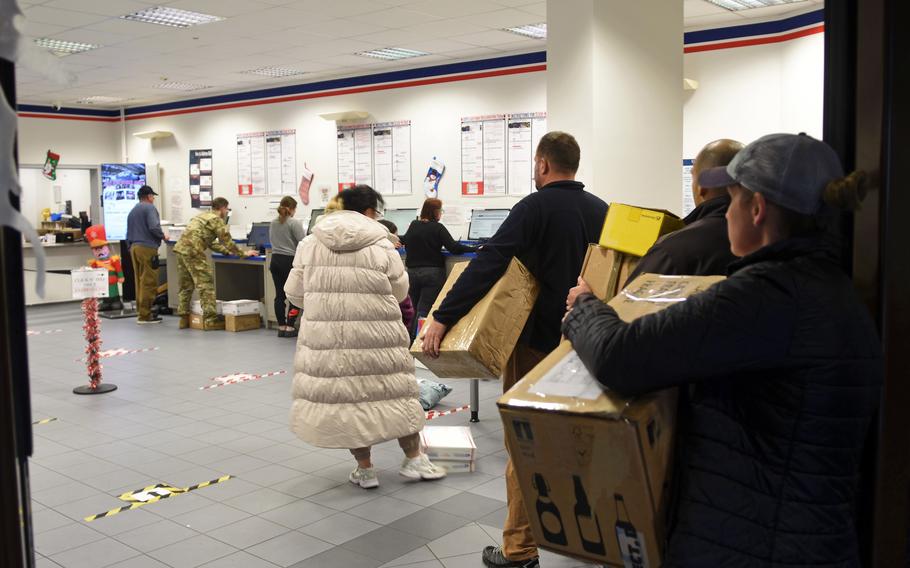 Customers wait in line to fill out electronic customs forms at the Northside Post Office on Ramstein Air Base, Germany, on Monday, Dec. 5, 2022. Military officials say vague or outdated customs forms on parcels being mailed from the United States are reasons a higher than usual number of parcels are being returned to sender this holiday season. (Jennifer H. Svan/Stars and Stripes)

In most cases, the reason for the package being returned is a mystery.

“I’ve had several packages returned to Target after buying them,” Stacy Schulz commented last month on a spouses Facebook page for RAF Mildenhall, Lakenheath and Feltwell in England. “They go to Chicago and then all updates stop and the next thing I know I’m getting an email from Target telling me they are processing my return. No explanation from Target or USPS as to what is happening.”

A Target representative told Stars and Stripes last week in a statement that the company had “found no issues with packages being delivered to APO addresses.”

Amazon and Old Navy, another company that several military families have said they are having trouble receiving packages from, did not respond to requests for comment.

Service members and their families have been told by military and postal officials to contact retailers to resolve these problems. But many retailers don’t have any answers, customers say.

Hana Maynard, a spouse in the RAF Mildenhall and RAF Lakenheath area, has sent “$400 in shipping costs alone down the drain” from eight packages that never arrived at her APO, she wrote over the weekend in a Facebook post.

Elizabeth Ashley Warren, also a military spouse in England, said she ordered presents for her kids from the Gap, but the gifts were returned to the retailer.

“I spent 45 minutes on the phone with Gap just for him to tell me over and over again that the original delivery date is December 7 (even though he stated that he did see that it was returned to sender on the tracking) and for me to call them back after that date,” Warren wrote.