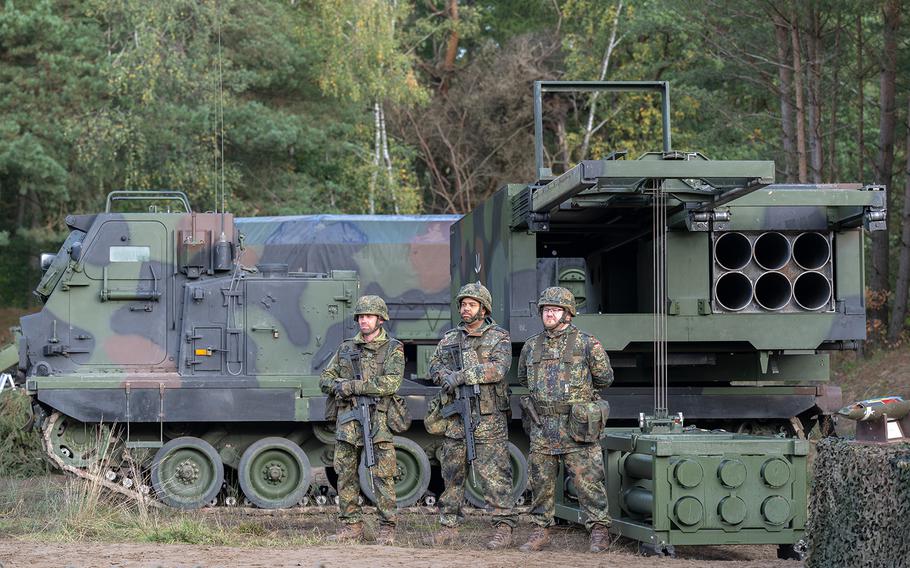 The crew of a rocket launcher Mars 2 with its munitions waiting for Chancellor Olaf Scholz during a visit at the Bundeswehr army training center in Ostenholz on Oct. 17, 2022, near Hodenhagen, Germany. (David Hecker/Getty Images/TNS)

(Tribune News Service) — Germany will fail to meet a NATO guideline of spending 2% of gross domestic product on its military next year and again from 2026 onward, according to an analysis quoted in local media on Monday.

Chancellor Olaf Scholz pledged in a speech to parliament shortly after Russia invaded Ukraine at the end of February that Germany would invest “more than 2% of GDP annually” in defense, and announced the creation of a special fund worth €100 billion ($105 billion) to help achieve the goal.

However, procurement problems and entrenched bureaucracy have hampered the spending drive. Defense Minister Christine Lambrecht recently revised the target to 2% of GDP “on average in the next five years,” potentially angering Germany’s allies who have long complained the government in Berlin isn’t pulling its weight militarily.

“The 2% target is receding into the distant future despite €100 billion in special funds, and even necessary procurements in the short term are not progressing,” the Rheinische Post newspaper quoted a study by the IW economic research institute as saying.

The regular defense budget — not including the special fund — would have to be increased by at least 5% per year if Germany wanted to achieve the 2% target, the paper quoted the study as saying.

The Cologne-based IW institute is funded by around 110 German business and employers’ associations.