In Ukraine's war-shrouded capital, a play about a murderous dictator hits close to home 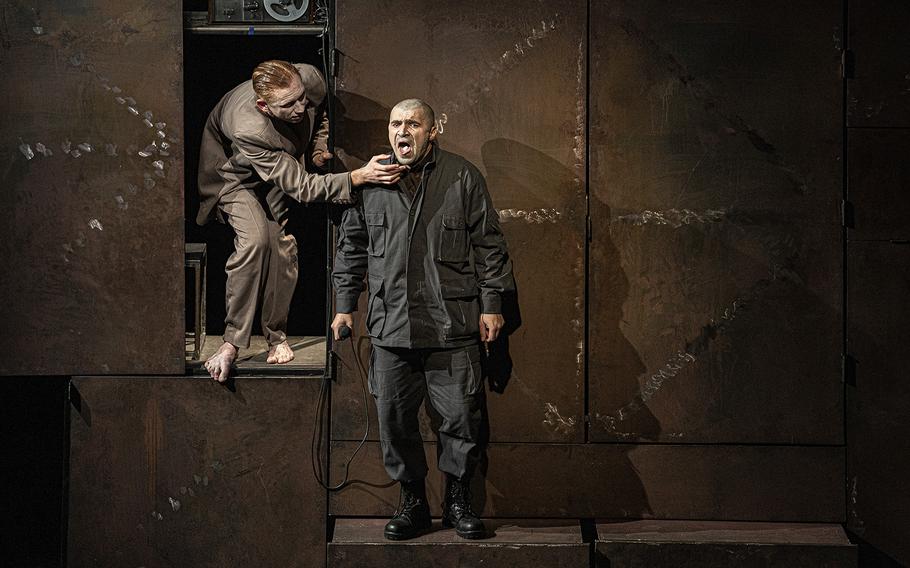 Actor Renat Settarov said he considered “Caligula” to be a timeless commentary on human nature. “It’s about the temptations of power,” he said. (Julia Weber/Ivan Franko National Academic Drama Theater/TNS)

KYIV, Ukraine (Tribune News Service) — In a black-walled theater at the heart of a darkened capital, the audience sits rapt as the plot unspools on a stark stage: A murderous dictator's calculated cruelty spirals out of control, and his madness grows in tandem with plots against him.

The modernist production has been playing to packed houses since July and is expected to run through December, although performances are often interrupted by air-raid alerts that send cast and audience alike hurrying to bomb shelters.

"I do think it resonates in this moment," said Vitaliy Azhnov, a 29-year-old Ukrainian stage and screen actor who turns in a slinkily malevolent portrayal of Rome's despotic third emperor.

In a theatrical twist, the decision to add the World War II-era work to the company's repertoire predates Russia's Feb. 24 invasion. But even as the production calendar was in its early planning stages, signs of menace abounded.

"War was in the air," said Ivan Uryvskyi, who directs the production by the Ivan Franko National Academic Drama Theater, a more than century-old troupe considered a central pillar of Ukraine's thriving theatrical scene.

The four-year reign of Caligula — the emperor Gaius Julius Caesar Augustus Germanicus, who was said to have disliked his nickname, derived from a term for a small-sized military boot — began benignly but morphed into what historians say was an extraordinary outburst of cruelty, debauchery and bloodlust that was cut short by the tyrant's assassination, at 28, by his own inner circle.

Those associated with this production, though, seek to avoid facile parallels with Russia's 70-year-old leader, who launched the invasion after a prolonged period of COVID-induced isolation and has justified savage attacks on Ukrainian civilians with grandiose rhetoric centered on imperial greatness.

"I don't see it as being about a particular person, really," said Azhnov, who is blond and slight, with a charismatic stage presence. Castmate Renat Settarov, 37 — who plays Chaerea, a friend who watches with dismay as Caligula descends into madness — said he considered the play a timeless commentary on human nature.

"It's about the temptations of power," he said.

Putin, who has been Russia's president or prime minister since 1999, has steadily appropriated ever-greater powers for himself at home even as he turned a hungry eye toward Ukraine, a onetime Soviet republic that has been a sovereign state since 1991.

He snatched away the Crimean peninsula in 2014 amid the tumult that followed the popular uprising against a Moscow-aligned leader, then fomented a bloody proxy conflict in Ukraine's east. By this time last year, tens of thousands of Russian troops were massed on Ukraine's borders, even as the Kremlin, up until nearly the last moment, denied any intent to launch a full-scale invasion. 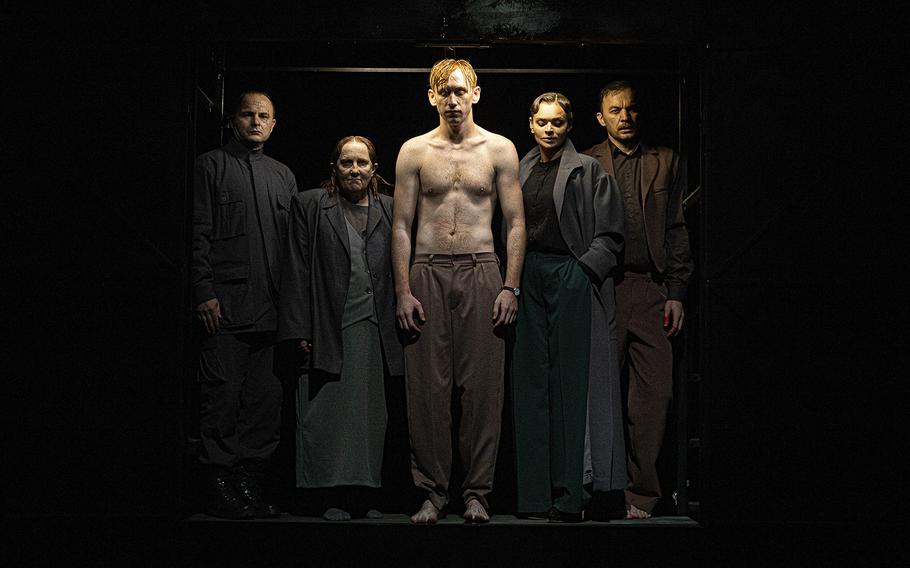 Once war broke out, "the meaning of this play became very accurate, and we were thinking, 'Should we go on with it?'" said Uryvskyi. "For the first three months, there were doubts if we even needed theater, what was needed for our society."

As it turned out, a commitment to high culture was intrinsic to Ukraine's wartime resolve. By last spring, live performances of all kinds — classical concerts, opera and ballet, jazz revues, plays like this one — had become a show of defiance. In recent weeks, with the electrical grid faltering under a concerted Russian assault, the Kyiv Philharmonic performed by candlelight, and widely circulated images on social media showed the orchestra at the Opera House in the southern city of Odesa rehearsing in near-total darkness.

Whenever an air raid siren goes off during a performance of "Caligula" — in some shows it happens more than once — the cast members make note of exactly where they were forced to break off and head to the bomb shelter, and pick up in mid-scene when they again take to the stage.

"What is really so moving is that always, everyone comes back," said Settarov.

The play itself is a product of wartime. Camus, who played an active role in the French Resistance, began writing it in 1938, as war clouds gathered over Europe. Its first production was in 1945, months after the Nazis' defeat.

In the telling of Camus, whose works became a wellspring of existentialist philosophy, Caligula recognizes the utter meaningless of his sadistic hold on all around him, and allows the machinations that lead to his assassination to proceed unimpeded.

The production features a simple set consisting of a series of sliding-doored compartments, both full-length and claustrophobically confining. The costumes evoke the mid-20th century, with Azhnov at one point engaging in a bleak striptease and re-clothing himself in women's garb. And although the events on which the play is based are explicitly violent, including the murder of Caesonia, who loves Caligula despite herself, they are depicted onstage in largely symbolic fashion.

"The emotional atmosphere is overwhelming enough without it being gruesome," said Kseniya Basha, 39, a veteran actress who portrays Caesonia. "Collectively, we are experiencing violence and trauma, and everyone feels that."

In the darkened square outside the landmark Rococo-style theater, even some attendees who acknowledged mixed feelings about the production expressed pride that it had taken place at all.

"I wasn't so sure about all the artistic choices, to be honest!" said Daniel Podosk, a 30-year-old businessman. "Still, you experience the sense of tragedy."

"We need things like this to keep our minds off the war," said another theatergoer, Serhiy Klebyk, 34. "But at the same time to find ways of thinking about everything that is happening to us. This is a way of doing that."