KAISERSLAUTERN, Germany — American Forces Network Europe this week said farewell to the man who for decades was the signature voice on the airwaves for U.S. troops in Europe.

Gary Bautell, 80, died Nov. 23 following injuries from a car accident, according to staffers with the U.S. military’s television and radio broadcast service.

During his more than 60 years at AFN Europe, he introduced postwar Germany to American rock ‘n’ roll and interviewed a slew of national and military leaders. He was a radio DJ, news producer, station manager, head of network news and staff trainer.

A memorial service for Bautell was held Monday at Hainerberg Chapel in Wiesbaden. He is survived by his wife, Anna, three children and several siblings.

“Gary was beloved by both American service members and the German people who tuned into his broadcasts, and he loved them and the radio broadcast profession, for which he dedicated the whole of his adult life,” Lt. Col. Adam Hallmark, AFN Europe commander, said in a statement. Gary Bautell joined the American Forces Network in 1962 as an Army private and became known as the voice of the U.S. military in Europe for his decades of service. Bautell died Nov. 23, 2022, at age 80. (U.S. Army)

A native of Bay City, Mich., Bautell was born on May 31, 1942. He joined AFN Europe in November 1962 as a private after a previous stint as an Army engineer in Germany, where he first heard AFN radio.

He reenlisted to join the military network after showing his recruiter that he had commercial DJ experience at a radio station in Michigan and at the Michigan State University campus radio station, according to a 2012 Army feature on Bautell.

His first day on the job at the network headquarters at Hoechst Castle in Frankfurt was spent on a battery of tests, including a voice audition and exams on foreign affairs and classical music. He passed them all, the Army stated.

He left the Army a second time in 1966 to work construction with his dad in Michigan but that same year returned to Europe and AFN as a government civilian.

He was one of the few remaining U.S. civilian employees in Europe who had been “grandfathered” in and not required to rotate back to the U.S. after a five-year tour, said Bill Hickman, chief of affiliate operations for Defense Media Activity Atlantic/AFN Europe.

Bautell went on to host three DJ programs: “The Dufflebag Show,” two rock songs an hour mixed in with “milder” music by singers such as Ella Fitzgerald; “Music in the Air,” back-to-back instrumental songs; and “Midnight in Europe,” a mix of poetry and jazz. He delivered lines such as, “Cool breezes, blowing leaves and smooth jazz, you’ve got it all right here with Mr. Midnight.”

His radio show reached a combined audience of millions of Americans and Germans. In the 1960s and ’70s, German radio was “state-run, boring stuff,” mostly German-language folk-type music, Bautell said in the 2012 story. “AFN changed German pop culture by introducing them to rock, country and jazz.” 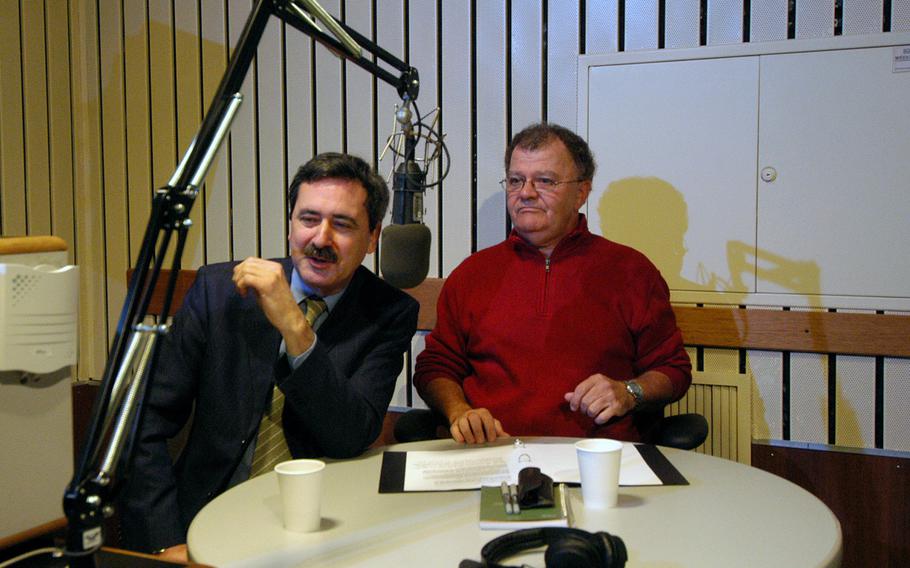 On the last day of broadcasting, Oct. 28, 2004, at the American Forces Network studio in Frankfurt, Germany, Gary Bautell, left, and Herb Glover talk about the station’s history. Bautell died Nov. 23, 2022, at age 80. (Michael Abrams/Stars and Stripes)

After initial work as a DJ, Bautell transitioned to news broadcasts. He was fluent in German and either met or interviewed every German chancellor from Willy Brandt to Angela Merkel. He also interviewed several U.S. secretaries of defense and presidents Bill Clinton and George W. Bush.

In addition to Frankfurt, Bautell also worked at AFN stations in Stuttgart, Wiesbaden and Mannheim.

Gen. Carter Ham, the former commander of the U.S. Army in Europe, once called Bautell “the voice of the U.S. military in Europe,” after hearing him on the radio during three tours on the Continent.

Posts about Bautell this week on AFN Wiesbaden’s and AFN Europe’s Facebook sites received more than 120 comments collectively, with many people sharing fond memories of listening to Bautell on the radio.

“There are and have been so many great DJs across the AFN network, but Gary will always be synonymous with AFN Europe for me,” one comment said.

Hickman said Bautell’s voice “was a great thing,” but he’ll also be remembered for “his cool, calm demeanor and his passion for sharing his knowledge about broadcasting.”

Also, his salt-and-pepper mustache, which Hickman called his trademark.