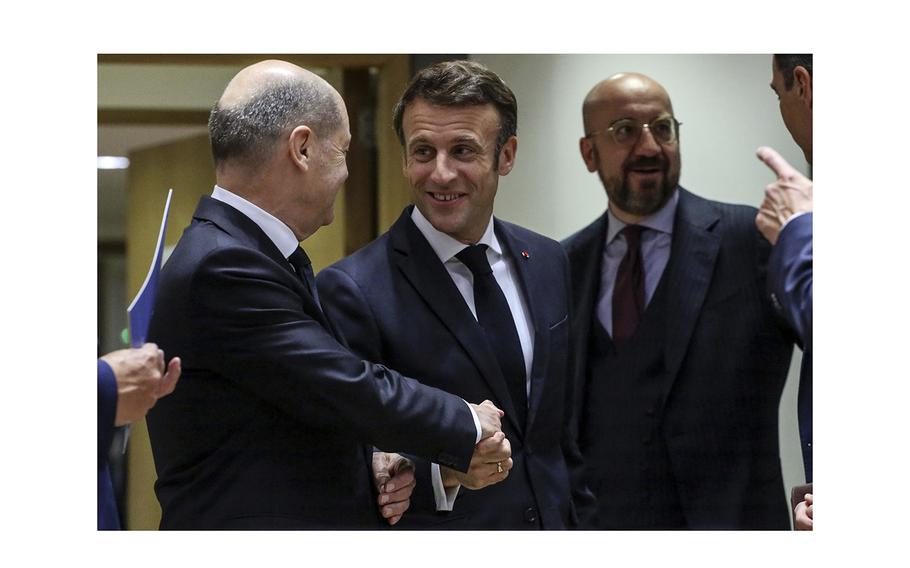 Macron — who's due to visit Joe Biden in Washington at the end of this month -- has pushed for a "Buy European Act" to counter a recently passed American climate and tax law, which aims to boost domestic production of electric cars and reduce reliance on China for battery components and materials.

Germany's stance is that while Europe needs to respond with beefed up support for its own industries, it's a strategic mistake to pursue conflict with Washington with a war raging in Ukraine, according to government officials in Berlin.

Germany is hopeful that the Biden administration will agree to adjust the law to take at least some of Europe's concerns into account, and a meeting of the E.U.-U.S. Trade and Technology Council scheduled for Dec. 5 would be an appropriate forum to thrash out a compromise, said the officials, who spoke on the condition of anonymity.

The lack of a coherent Franco-German response to America's so-called Inflation Reduction Act is the latest sign of discord between the E.U.'s two powerhouse nations, and more evidence that the continent's most important bilateral relationship is fraying.

The two nations have disagreed in recent months on key policy areas including protecting their economies from the energy crisis, defense projects and nuclear energy. Scholz will have a chance to smooth relations and discuss policy toward the U.S. with his French counterpart, Elisabeth Borne, when he hosts her for talks in Berlin on Friday.

The EU's response to the U.S. should involve both negotiations and beefing up the EU's industrial policy with a "Buy European Act," according to a French government official.

Germany and France have yet to find common ground on how such legislation could be structured, and it will be on the agenda during Scholz's meeting with Borne, said the official, who asked not to be identified.

What Germany and France do agree on, according to officials from both sides, is the need for an expansion of so-called "Important Projects of Common European Interest" — E.U. programs that allow for the broader use of otherwise-regulated state aid.

German Finance Minister Christian Lindner — who is also the leader of the business-friendly Free Democrats -- has strongly opposed the idea of a "Buy European Act," in line with his party's broad opposition to government intervention in the economy.

"It produces no winners, only losers," Lindner said during a news conference hosted by the Sueddeutsche Zeitung newspaper in Berlin this week.

"The approach from my point of view is to talk to the U.S. — the goal is not to hurt the Biden administration," he added. "It's an opportunity to talk about new transatlantic free trade."

His cabinet colleague, Economy Minister Robert Habeck, has praised the U.S. climate subsidies on the one hand, while on the other insisting on the need for a "level playing field" and urging Europe to move faster to develop the technologies needed to achieve emissions targets.

"It's absolutely not a question of money," Habeck, a member of the Green party who is also the vice chancellor, said Wednesday at the same Berlin conference. "There is plenty in the pot but we're too slow in deploying it."

The European Commission, the EU's executive arm, called on member states to maintain unity on the issue during a meeting this week, and expressed increasing pessimism about the likelihood of finding a solution to its fundamental concerns over the U.S. law, according to people familiar with the talks.

The commission said the U.S. isn't showing any sign of urgency to address its demands, and it doesn't expect Washington to substantially change the green subsidies package. Instead, both sides are looking at targeted solutions to some of the EU's specific concerns, the people said.

Against this backdrop, the commission is preparing an E.U. sovereignty fund to support key industries that could be financed via joint borrowing, according to senior officials. But the institution has also warned member states of the damage that a global subsidies race could cause, the people added.