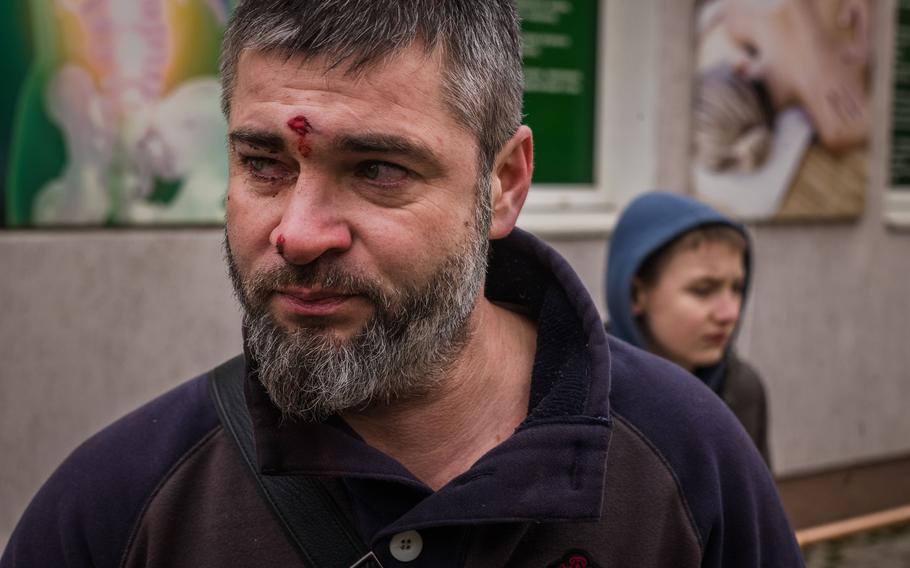 Serhii Kindra, 42, and his son Tymofii, 10, wait outside a hospital where his other son, Matvii, 13, lies in critical condition. The family was struck by cluster munitions by the Antonovsky Bridge near Antonivka, Ukraine, a suburb of Kherson. The area is being targeted by Russian forces after an earlier retreat. (Wojciech Grzedzinski/The Washington Post)

ANTONIVKA, Ukraine — The collapse of the Antonovsky Bridge earlier this month into the Dnieper River below marked the end of occupation in Kherson, as Russian forces fled the only regional capital they had captured since the start of their full-scale invasion of Ukraine.

But less than two weeks after hundreds of Ukrainians waved flags in the streets of Kherson to celebrate the liberation of their city, the residents living in the shadow of that bridge — or what’s left of it — have become sitting targets for renewed Russian attacks.

From firing positions on the other side of the river, Russian forces are incessantly shelling the city they continue to claim is theirs. After what was initially a quiet retreat from Kherson, Russian troops appear to have regrouped on the east bank of the Dnieper in recent days, sending artillery, rockets and mortars roaring toward residential parts of Kherson.

The renewed bombing highlights the limits of Ukraine’s victory in recapturing Kherson city, and it confirms a sobering reality that military experts had warned of for months: By retreating, the Russians had strategically abandoned an inherently weak position in the city on the west side of the river, only to dig into more favorable and fortified defensive positions on the opposite bank.

With the bridges blown, the Dnieper proves a natural barrier that Ukrainian troops will not cross without taking heavy casualties, and Russia, for now, maintains its grip on the broader Kherson region, including the crucial Kakhovka hydroelectric power plant and the North Crimean Canal, a crucial supply of fresh water for Crimea, which Russian illegally annexed in 2014.

Perhaps the worst of Russia’s renewed attacks has been here in Antonivka, steps away from what was once the main bridge, where on Tuesday morning a cluster bomb sent shrapnel flying toward the face of 13-year-old Matvii Kindra.

His father, Serhii Kindra, was driving Matvii and his brother back home from a humanitarian aid gathering at a church when the blast hit their car. The 42-year-old father and his other son, age 10, suffered minor injuries.

But Matvii, a passionate martial artist, lay in critical condition in a hospital intensive care unit. His father stood outside the hospital, shaking and clenching his jaw, with his son’s blood still on his forehead and nose. His younger son paced quietly next to him, holding back tears as he looked toward the hospital.

“We liberated the city,” Kindra said, “but the war is not over.”

Kindra, a popular master of ceremonies at weddings and events in Kherson, had not yet reached his wife to tell her the news. She was assisting a group of Red Cross workers at the time, Kindra said.

A previously quiet riverfront suburb of Kherson, where street ads still promote vacation rentals, the village of Antonivka has become a front line.

At least six people have been killed by Russian attacks on the town in the past five days, according to the mayor, Serhii Ivashchenko, 42. Ivashchenko said he fears that the bloodshed could get even worse.

Antonivka is the closest town to its namesake bridge, and the areas in town nearest the river now lie mostly exposed to Russian forces.

About an hour after Kindra and his sons were struck by cluster munitions by the bridge, Washington Post journalists passed by the family’s smashed car in an underpass frequently used by residents to enter the eastern neighborhoods of the suburb.

Sniper fire whizzed by, making clear the Russians on the other side of the river were still in close range.

A Ukrainian military checkpoint was previously stationed near the bridge, blocking some drivers. But the checkpoint became a target, Ivashchenko said, forcing the military to move it closer to Kherson city.

Across Kherson, officials have been offering voluntary evacuations, warning residents that a cold, dangerous winter could lie ahead. The evacuations are taking place days after Kherson residents cheered the arrival of the first train from Kyiv, marketed to the nation as a “Train to Victory.”

Most of the city is without power and running water, after Russian forces destroyed Kherson’s power supply before their retreat. Cellphone service is spotty or nonexistent in parts of town, especially in Antonivka, making it more difficult for officials to keep residents informed or to call for help.

Just a 10-minute drive from the Kherson city center, where coffee shops and restaurants are reopening and bands have performed concerts in the main square, the streets of Antonivka remain barren.

Rockets litter the front yards of residents, who leave their homes only to stand in line for humanitarian aid. But aid stations also are being targeted. At a recent food handout attended by the Kherson city mayor, a crowd was forced to lie flat on the ground amid shelling. 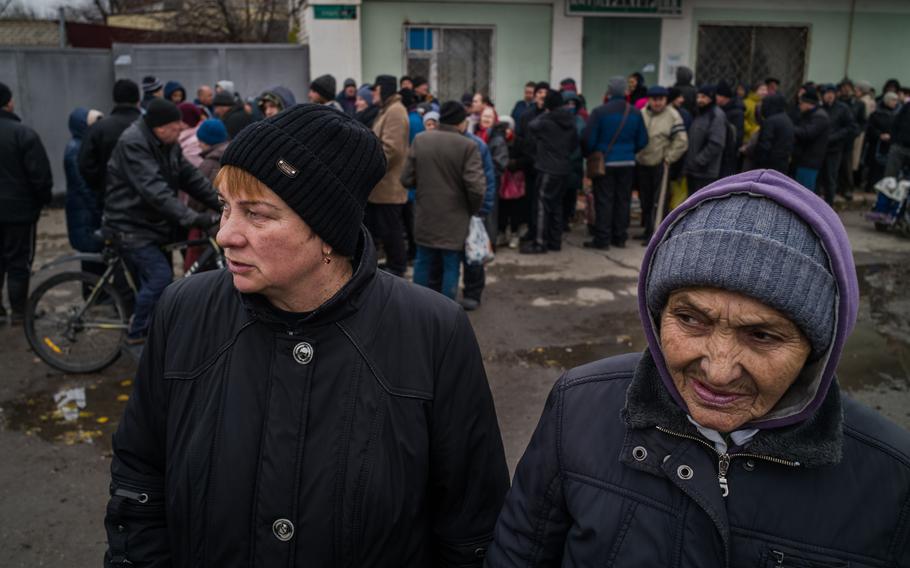 The Antonovsky Bridge collapsed after Russian forces fled the city. Ukrainians marked this retreat as a win, but the Russian soldiers regrouped across the Dnieper River and have been bombing ever since. (Wojciech Grzedzinski/The Washington Post)

Midday on Tuesday, Ivashchenko pleaded with an official outside of the temporary offices of the Kherson city hall to stop publishing the exact addresses where they were handing out aid. He suspected there were still Russian sympathizers in his village sending information to forces across the river and helping to coordinate attacks.

“They are insane and can use that information to target it,” Ivashchenko told the official. “If you do want to post it somewhere, I don’t want to be the one responsible.”

Before the invasion, Ivashchenko was one of three people helping lead the village, which was once home to about 13,000 people. That population has now shrunk to 3,000, and the other two town leaders have not returned to the town, fearing for their lives. Now Ivashchenko was driving around town helping pass out bags of food.

“When Kherson and the villages were liberated, there were signs of things opening in Antonivka,” the mayor said. “But in the last five days, the situation changed.”

At one of these humanitarian aid points, a crowd of dozens gathered as temperatures dropped near freezing. They could see their breath as they asked neighbors for help finding food and water.

Residents there said they knew they were standing, unprotected, in the line of Russian fire. But they had no choice but to wait there, in the cold, for food.

Illia Kobits, 74, said shrapnel is strewn across his lawn. The skies, meanwhile, have become louder and louder.

The river, he said, is a massive natural border. He’s not sure when — or how — Ukrainian forces will manage to push the Russians back farther.

“It’s not going to be anytime soon,” he said.