KAISERSLAUTERN, Germany — Students living in the largest American military community overseas handed over thousands of dollars Monday to a local veterans group and an organization that assists military families.

About $24,100 was collected at a march organized by the Air Force Junior Reserve Officers’ Training Corps at Kaiserslautern High School earlier this month to mark Veterans Day.

This year was the first time since the annual event began three years ago that the cadets met their fundraising goal of $22,000. 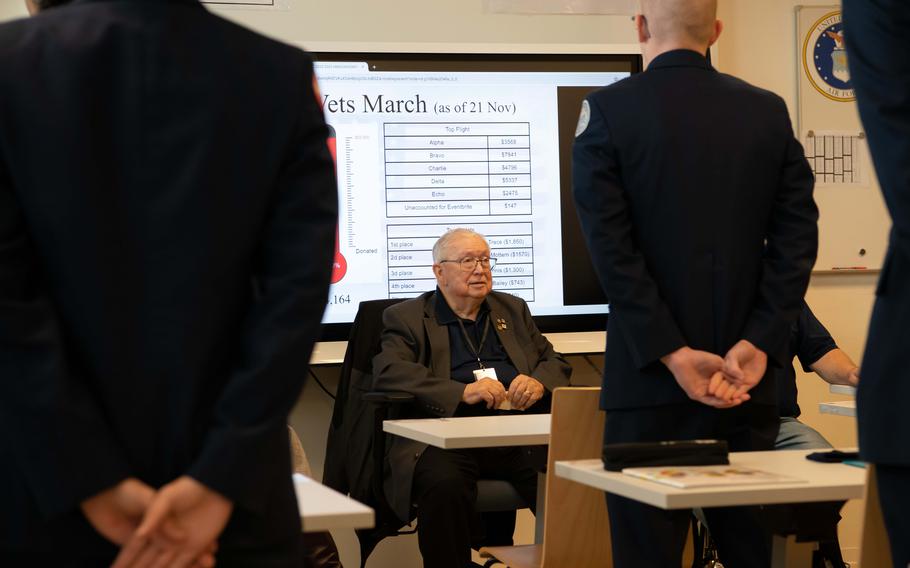 “It’s phenomenal,” said retired Air Force Tech. Sgt. Dennis Walton, commander of Veterans of Foreign Wars post 10614, which received a portion of the donations. “The opportunity to get so much money from these kids is awesome. It will give us the opportunity to give back much more to the community than we would normally be able to.”

The VFW organizes events for veterans and active-duty troops, and provides financial assistance to members of the military community.

Both the post and the local branch of the Fisher House, which provides free lodging to families of patients receiving medical care at the nearby Landstuhl Regional Medical Center, received checks for $2,640.

“This is the second time they are doing this for us, and we are extremely grateful for it,” said Sarafina Buchanan, the manager at the Landstuhl Fisher House, which also received money from the students last year.

This time around, the donation will likely go toward basic costs like heating because of the skyrocketing energy prices in Germany, Buchanan said. 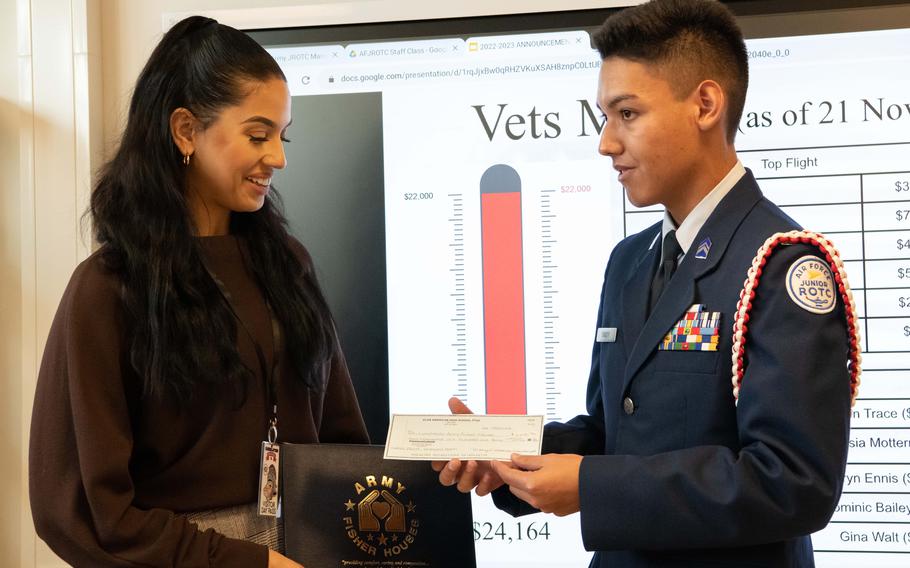 The remainder of the money collected by the cadets will go toward supporting the JROTC program, which has over 130 members. JROTC activities include a marksmanship team, a military ball, special uniform items and travel to the U.S. for drill team competition.

The number 22 was a theme of the event because it matches the number of veterans who die by suicide every day.

The total amount given to the VFW and Fisher House was 22% of the total funds the cadets raised. The march consisted of 22 laps around their school’s track at Vogelweh on Nov. 11, and the minimum donation was $22.

“It is definitely rewarding, not just for me, but I think for the corps as a whole,” cadet Annabella Seidl said. “We get to put money toward something we actually see the result of.”

Fellow cadet Jordan Hobbie agreed. He said that though the event itself was fun, the main thing on the cadets’ minds that day was whether they had raised the $22,000.

“When we found out we had done it, it was a good feeling,” Hobbie said.