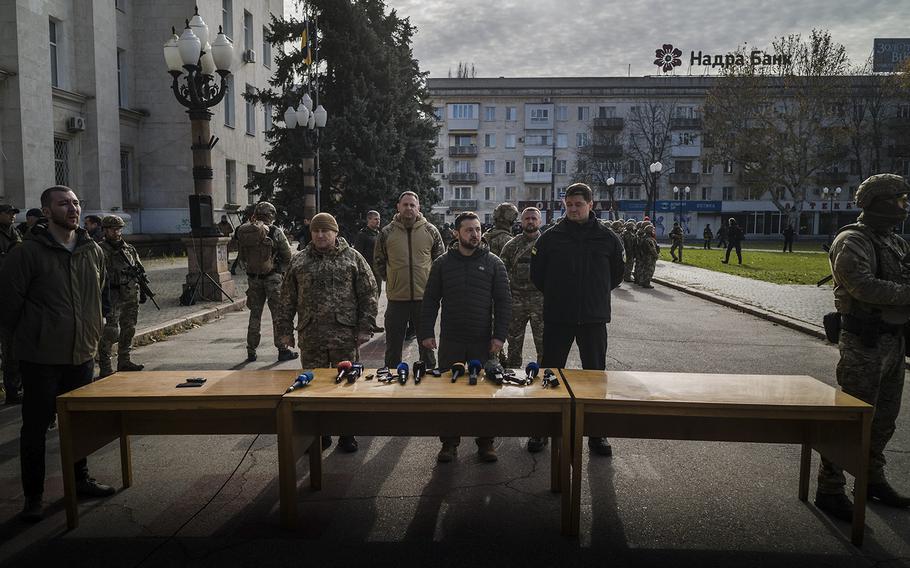 KHERSON, Ukraine - Ihor didn't even know the first name of the person who contacted him. The man said he was a member of Ukraine's Special Operations Forces and wanted to know if Ihor was interested in helping fight the Russians occupying his city of Kherson.

For months, the two kept up a coded communication over the Telegram messaging app. Sometimes Ihor would be asked to help pinpoint locations from which the Russians were firing artillery. Other times, he sent the man, who asked to be called Smoke, the positions of Russian troops, armored vehicles and ammunition stocks.

Then in August, Ihor had a more dangerous task from Smoke. There was a cache of weapons hidden somewhere in Kherson, and Ihor needed to bury them in a different location and wait for the signal. Eventually, Smoke told him, Ihor might be called on to take up one of the arms and help Ukrainian soldiers if the battle for Kherson turned to street fighting and small sabotage groups would be necessary.

"Around the city, there were a lot of people with weapons who were waiting for the right time to use them," Ihor said. He declined to provide his surname out of concern for his safety, and Smoke asked to be identified only by his call sign because of his work in special forces.

During more than eight months of Russian occupation, an underground resistance movement formed in Kherson, the lone regional capital Vladimir Putin's military was able to capture since the start of its invasion last February.

Stories of brave Ukrainian citizens standing up to the invading soldiers have been widespread throughout the war. But Kherson, occupied since early March, was a unique hub for resistance activity where many civilians worked in close coordination with handlers from Ukrainian security services.

Help from inside occupied territories - at times beyond the reach of Ukraine's missiles and artillery - has proven key for Kyiv in pulling off some of its most brazen attacks, including at an airfield in Crimea, which Moscow illegally annexed in 2014.

In Kherson and in the occupied city of Melitopol, about 140 miles to the east, there have been mysterious explosions during the war that have killed or injured Russian-installed authorities. Those blasts are believed to be the work of resistance fighters, also known as partisans, or Ukrainian special forces working behind enemy lines. Sometimes, bombs exploded in occupying officials' cars or at their homes.

People often did not know who among their neighbors or co-workers were also resistance fighters. In interviews, two members of the resistance claimed that they managed to kill a few drunk Russians walking alone in the streets by stabbing them. Those claims could not be verified. But mostly the partisans were given nonviolent assignments, resistance fighters and military officers said, such as hiding weapons or explosives at a certain location, identifying collaborators, or reporting where Russian soldiers and their materials were based. That information was then used to direct Ukrainian artillery fire.

In Kherson, it all added up to a subtle insurgency that Ukraine's military leaned on as the southern front line drew closer and closer to the city, ultimately forcing the Russians to retreat last week. With Kherson city now free of Russian soldiers, the resistance movement is rising to the surface.

In the central square this week, Smoke, wearing a balaclava, ran up to Ihor and hugged him tightly.

"The main thing for me is that people remained alive," Smoke said. "This worried me the most. But they survived and, thank God, that's the most important thing."

There was a time when Ihor wasn't sure he would.

There was one other person he and Smoke were working with who was also tasked with burying weapons, Ihor said. That man was caught by the Russians and, after being beaten, eventually gave up the location where he was supposed to meet Ihor. Ihor was then captured, too, he said, and spent 11 days in August at a detention facility where the Russian guards tortured their prisoners.

As Ihor returned to the prison for the first time, accompanied by Washington Post journalists, he struggled to hold back tears. Tatyana, a 74-year-old woman who lived next door to the detention center, said she could hear men screaming every day. "I never wanted to see this place again, but coming back like this is sort of funny," Ihor said. Some people standing outside asked Ihor if he had been held there.

Because Ihor was still in communication with Smoke, who was based outside in nearby Ukrainian-controlled Mykolaiv, the Russians released him and said they would be monitoring any text exchanges between the two. They asked for Ihor to send screenshots of their conversation any time there was an update - and threatened his life if he did not cooperate.

But Smoke and Ihor had agreed on a subtle code that could act as a warning - for example, responding to a message with "ok" instead of "all right."

Ihor still took risks after that. In September, he noticed the Russians had based several transport trucks at a car park near downtown Kherson. Ihor walked past the building with a phone to his ear, pretending to be on a call while his camera recorded what was inside. Two days later, the place was hit with artillery.

Several resistance fighters told The Post that they had reported the location, which helped the Ukrainian armed forces confirm it was a worthy target.

One member of Ukraine's special services, who spoke on the condition of anonymity because he was not authorized to speak publicly, said he acted as a handler for several informants during the occupation, which required assessing what each could do. A person with a car could drive around and mark locations of troops and weapons. Another with a view of a main road could report on the Russians' movements.

"If, for example, a bridge or an important communication hub, such as power lines, is blown up, then that might have been with our help," the handler said.

"We are talking about valuable equipment, not just armored personnel carriers, but about command and staff vehicles, communication vehicles, air defense or electronic warfare," the handler added. "The destruction of what is expensive and available in small quantities can incapacitate the Russians and give a certain tactical advantage to our armed forces in some parts of the front."

Some members of this internal resistance were trained and prepared before Russia ever invaded - just in case, the handler said.

Others were unlikely partisans, like Iryna, a 58-year-old woman who worked for the local government. Iryna, who declined to provide her surname out of concern for her safety, had contacts in the SBU, Ukraine's main internal security service, and regularly passed them information about how occupation authorities were organized and who was working with the Russians. They also had their own code. Once, she even sent a message to her daughter in Bulgaria to forward on to her handlers.

One day, some men Iryna described as "fellow partisans" came to her home and asked to bury some things in her yard. She agreed, covering the spot with tomatoes. When Russian soldiers searched her home, she claimed to be just a woman who was helping cook meals for the neighborhood.

Her SBU acquaintances visited her earlier this week and dug up what had been buried in the yard. "They told me it was everything to make explosives," she said.

Some of the resistance was more public, but for psychological effect. An organization called Yellow Ribbon regularly spray-painted locations around town - marking Russian establishments with a yellow ribbon symbol or the Ukrainian letter "i." They targeted Russian banks, places where the Russians were handing out passports, and where referendum ballots on Russian annexation were being prepared. The Russians would cover up the paint, but Yellow Ribbon would just mark it again.

The organizers tagged the home of Kirill Stremousov, one infamous Moscow-installed official in Kherson who recently died in a car accident. They defaced Russian billboards proclaiming that "Russia is here forever" or that "Ukrainians and Russians are one." And they posted photos of "collaborators" eating at a restaurant around town or walking down the street.

"Then they all started to walk around with bodyguards after that," said Yellow Ribbon's organizer, who spoke on the condition of anonymity out of concern for his safety.

One goal, he said, was to make the Russians paranoid about the resistance that existed around them. Sometimes people would take a photo of two Russian soldiers walking from behind, and then Yellow Ribbon would post it on their Telegram channel, with a warning: "We're watching you."

One of Yellow Ribbon's posters hung in the city made a reference to a weapon system, called HIMARS that the United States has provided to Ukraine. "If HIMARS can't reach you," the poster said, "a partisan will."