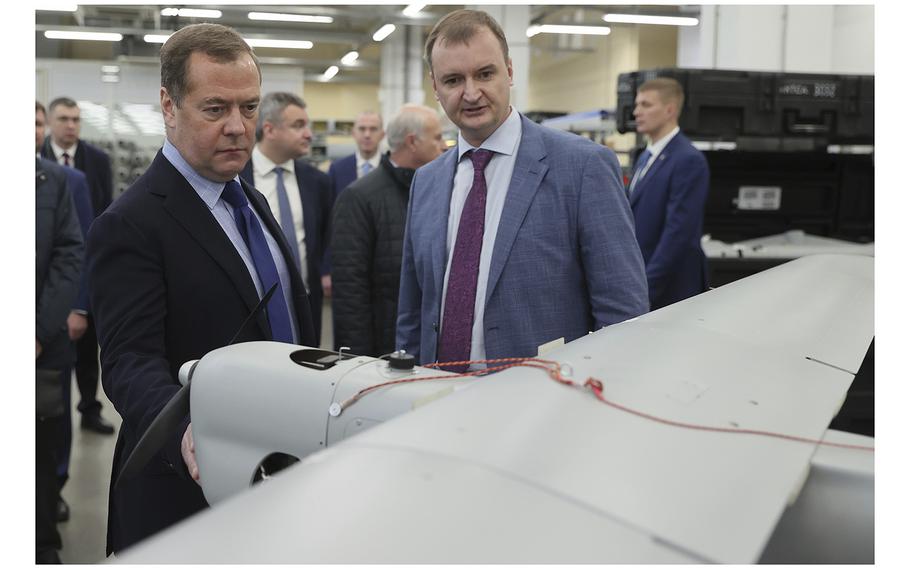 WASHINGTON — After weeks of savaging Ukrainian cities with Iranian-made drones, Moscow has quietly reached an agreement with Tehran to begin manufacturing hundreds of unmanned weaponized aircraft on Russian soil, according to new intelligence seen by U.S. and other Western security agencies.

Russian and Iranian officials finalized the deal during a meeting in Iran in early November, and the two countries are moving rapidly to transfer designs and key components that could allow production to begin within months, three officials familiar with the matter said in interviews.

The agreement, if fully realized, would represent a further deepening of a Russian-Iranian alliance that already has provided crucial support for Moscow's faltering military campaign in Ukraine, the officials said. By acquiring its own assembly line, Russia could dramatically increase its stockpile of relatively inexpensive but highly destructive weapons systems that, in recent weeks, have changed the character of the nine-month-old Ukrainian conflict.

Russia has deployed more than 400 Iranian-made attack drones against Ukraine since August, intelligence officials say, with many of the aircraft used in strikes against civilian infrastructure targets such as power plants. After being forced to abandon Ukrainian territory its forces captured early in the war, Moscow has shifted to a strategy of relentless air assaults on Ukrainian cities, using a combination of cruise missiles and self-detonating drones packed with explosives to knock out electricity and running water for millions of people.

For Moscow, the agreement could fill a critical need for precision-guided munitions, which are in short supply after nine months of fighting. The arrangement also offers substantial economic and political benefits for Iran, the officials say. While Tehran has sought to portray as itself a neutral in the Ukraine conflict, the appearance of Iranian-made drones over Ukrainian cities has triggered threats of new economic sanctions from Europe. Iran's leaders may believe that they can avert new sanctions if the drones are physically assembled in Russia, the officials said.

Details of Iran-Russia deal were finalized in the early November meeting, which involved a team of Russian defense-industry negotiators who traveled to Tehran to work out the logistics, according to security officials from two countries that monitored the events. The officials agreed to discuss the matter on the condition that their identities and nationalities not be revealed, citing the need to protect sensitive and ongoing intelligence-collection efforts.

A separate delegation headed by Russian Security Council Secretary Nikolai Patrushev traveled to Tehran on Nov. 9, to discuss, among other topics, economic sanctions and other "Western interference" in their governments' affairs, according to state-run Russian and Iranian news media.

One of the officials briefed on the secret agreement described an aggressive effort by both countries to facilitate production of Iranian-designed drones inside Russia.

"It is proceeding quickly from decision-making to implementation," the official said. "It is moving fast and it has lot of steam."

Multiple NATO countries, including the United States, also have seen the intelligence, but government officials declined to discuss the details. The White House declined to comment on the specific report of Russian-Iran collaboration.

But National Security Council spokesperson Adrienne Watson said in a statement to The Post: "Iran and Russia can lie to the world, but they can't hide the facts: Tehran is helping kill Ukrainian civilians through the provision of weapons and assisting Russia in its operations. It's another sign of how isolated both Iran and Russia are."

"The United States - with allies and partners - is pursuing all means to expose, deter, and confront Iran's provision of these munitions and Russia's use of them against the Ukrainian people. We will continue to provide Ukraine with the critical security assistance it needs to defend itself, including air defense systems," Watson added.

A spokesman for the Russian Embassy in Washington referred reporters to the Russian Federation's Ministry of Defense, which did not reply to a request for comment.

Iran's U.N. mission in New York, in response to questions about the reported technology-sharing arrangement, declined to address the specific allegations. But a spokesman acknowledged that Iran and Russia have "maintained bilateral defense, scientific, and research cooperation, that predates the start of the Ukrainian conflict."

While Tehran has publicly declared its neutrality in the conflict, Iran has "prioritized increasing defense cooperation with other countries" in the two years since the expiration of a U.N. resolution restricting Iran's ability to sell arms, said Mahdi Nourian, the mission's minister-counselor.

"Following the alleged claims of using Iranian drones in the Ukraine conflict, Iran has requested a joint expert meeting with Ukraine authorities to consider such allegations," Nourian said. "Significant steps have been taken so far in the collaborative dialogue between Iranian and Ukrainian defense experts, and it will continue to clear up any misunderstanding on this matter."

Ukrainian President Volodymyr Zelensky has harshly criticized Iran's decision to supply arms to Russia and called for new sanctions against the Islamic republic. "Its complicity in Russian terror must be punished," he said in a televised speech Nov. 6.

After previously denying that it has supplied drones or missiles to Russia, an Iranian spokesman earlier this month acknowledged that Tehran had sold some of its drones to Moscow, but did so before the start of the Russian invasion of Ukraine on Feb. 24. That claim has come under question following independent examinations of downed drones recovered inside Ukraine. Some of the drones contained Iranian parts stamped with a manufacture date of February 2022, casting doubt on whether the aircraft could have been assembled, shipped to Russia and deployed before the war started.

Iran has a long record of supplying weapons to pro-Tehran militia groups, and also for helping key allies begin indigenous production of Iranian-designed missiles and drones. Among the past beneficiaries are governments and Shiite militias in Lebanon, Yemen and Syria, said Michael Knights, a Middle East military and security specialist with the Washington Institute for Near East Policy.

"In this case, Iran is acting as a design bureau for a great power," Knights said. "Iran's economical design and half-century of covert procurement of Western technology is being married to the industrial scale of a great power - Russia. That will have benefits for both Russia and Iran."

Russia already possesses an array of unarmed aerial vehicles, or UAVs, which are used mainly for surveillance and artillery spotting. But Moscow has not invested in large fleets of armed drones of the type that U.S. forces have routinely used in military campaigns in Afghanistan and the Middle East. After expending thousands of its precision-guided missiles in strikes against Ukraine, Russia has turned increasingly to its Iranian partner for attack drones that Knights describes as "the wave of the future: cheap, fast and good enough."

Russian factories previously carried out minor alterations to some of the drones purchased from Iran, changing, for example, the nomenclature and color scheme so they better resemble Russian munitions. But until now there has been no indigenous production of Iranian-designed UAVs on Russia soil, according to the security officials briefed on the new technology-sharing arrangement.

The officials said it was unclear what kind of assistance Tehran is seeking from Moscow in return, beyond money and the advantages that come from a strengthened alliance with Iran's powerful northern neighbor. In the past, Russia has provided Iran with a surveillance satellite to allow it to spy on its neighbors, as well as key components for the Bushehr nuclear power plant. Western news outlets have reported that Iran may be seeking additional nuclear help in exchange for its assistance with Russia's military campaign.

"What is the 'ask?' We're not sure," one of the officials said. "Clearly the Russians are offering diplomatic and economic assistance. They're also aware of the international pressure on Iran, and they want to help mitigate that."

A key question, weapons experts say, is whether Russia can acquire or manufacture the kinds of electronics and optical systems that enable Iran's drones to successfully conduct precision strikes over long distances. Economic sanctions imposed against Iran and Russia have severely restricted the sale of sensitive technology to both countries, including electronic guidance systems.

Independent analysis of Iranian drones recovered from Ukraine's battlefield has revealed the extent of Iran's continued reliance on foreign countries for key components. An October report based on examinations of three types of Iranian-built drones - the Mohajer-6, Shahed-131 and Shahed-136 - identified the existence of engine parts and electronics built by U.S., German and Chinese firms, according to the Institute for Science and International Security, a Washington-based nonprofit that conducted the analysis.

While it is unclear precisely how Iran obtained the parts, Tehran has a long history of circumventing international sanctions meant to disrupt work on weapons systems as well as its nuclear power facilities, the report said.

The pending expiration next year of a U.N. embargo on Iranian ballistic missile sales could given Tehran an additional boost as a weapons merchant, meaning it "will be free to continue to sell its weapons to Russia and others," the report said.

The Washington Post's Shane Harris and Paul Sonne contributed to this report.