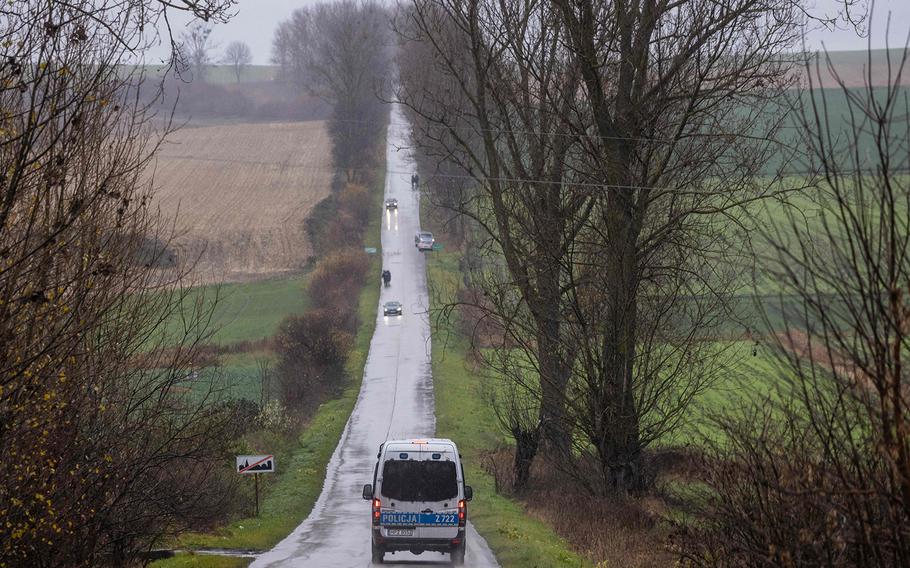 A police vehicle drives near the site where a missile strike killed two men in the eastern Poland village of Przewodow, near the border with war-ravaged Ukraine on Nov. 16, 2022. (Wojtek Radwanski/AFP)

NATO and Poland attributed the incident to Ukrainian forces trying to shoot down the scores of rockets fired Tuesday in one of Russia's biggest barrages during the war, which could potentially spur more deliveries of anti-air weapons by western nations.

NATO Secretary-General Jens Stoltenberg and Polish President Andrzej Duda said the incident did not appear to be the result of a deliberate military attack against Poland or NATO. But the alliance said Russia — not Ukraine — was ultimately to blame for waging a war that risks spilling over into allied territory.

"We have no elements today that indicate that there is a deliberate intention from the Russian side, so to some degree it's rather reassuring compared to what we were worried about last night," Belgian Defense Minister Ludivine Dedonder said in an interview Wednesday. "On the other hand, so many Russian missiles sent to the Ukrainian population" were catastrophic, she said.

Ukraine's Defense Ministry said it shot down 73 of more than 90 Russian cruise missiles aimed at Kyiv and other cities Tuesday, as well as 10 single-use drones, according to a Twitter post. Still, enough warheads got through to cause extensive damage to Ukraine's energy infrastructure, knocking out power in and around the capital, as well as in parts of neighboring Moldova.

Ahead of a virtual meeting of the Ukraine contact group on Wednesday, U.S. Secretary of Defense Lloyd Austin also stressed the importance of air-defense donations, noting that U.S. NASAM missiles operating in Ukraine had a "100% success rate in interrupting Russian missiles," including in Tuesday's attacks.

"We must do more to meet Ukraine's urgent air-defense needs, which can help protect Ukraine's energy infrastructure and provide heat for its children," Austin said.

In a country as large as Ukraine, no amount of air defense can create an infallible shield, because the number of systems and operators will always be limited. But the number of potential targets is not, according to Douglas Barrie, senior fellow for military aerospace at the International Institute for Strategic Studies, a London-based think tank.

"All this boils down to where are your batteries situated, how many reloads do you have and how quickly you can do it," said Barrie.

The incident in Poland also raised questions about how the alliance might defend its own territory in a real attack or respond to an attempt by Russia to test the bloc's resolve.

Stoltenberg said NATO's assessment of the threat facing its allies hadn't changed, reducing the likelihood the alliance will bolster air defenses on its eastern flank beyond the already increased presence there since Russia invaded Ukraine in February. He defended NATO's air defenses, saying that the systems are designed to prevent attacks, which the missile that landed in Poland didn't qualify as.

"That explains why the reactions were as they were," Stoltenberg said. "That doesn't say anything about our ability to defend against deliberate attacks against NATO territory."

Kremlin spokesman Dmitry Peskov praised the U.S. for what he called its "restrained" and "professional" reaction to the incident and dismissed allegations that it was caused by a Russian missile as "hysterical."

Although they're slower, less accurate, less powerful and easier to target than cruise missiles, Barrie said they're cheap and still have to be shot down, depleting Ukraine's stock of the much more expensive munitions required.

"The party ultimately responsible for this tragic incident is Russia, which launched a barrage of missiles on Ukraine specifically intended to target civilian infrastructure," the U.S. National Security Council said in a statement. "Ukraine had — and has — every right to defend itself."