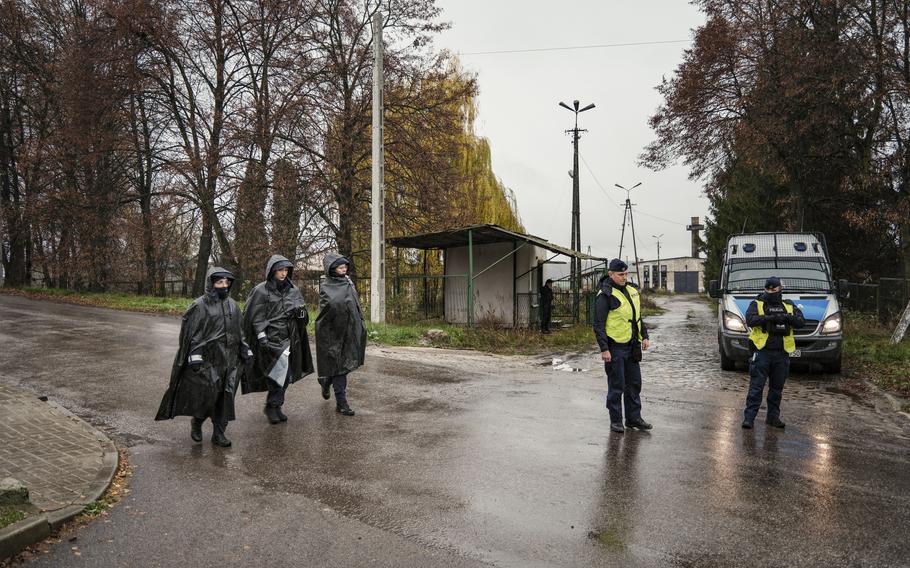 PRZEWODOW, Poland — Located just four miles from the Ukrainian border, residents of the sleepy Polish agricultural village of Przewodow had gotten used to living on the edge of a country at war. But they did not expect the war’s death and destruction to land — quite literally — on their doorsteps.

The village, with a population of just 430, was left reeling after a missile hit a grain silo Tuesday afternoon, killing two local men. The reverberations spread far wider — setting off fears of an escalation that might have led to direct hostilities between Russia and NATO, of which Poland is a member.

The missile happened to hit the only agricultural building in an expanse of open fields, killing the two men instantly, said the local mayor, Grzegorz Drewnik, who rushed to the scene as first responders arrived.

For residents, the anxiety of the first days of Russia’s invasion of Ukraine has now returned, Drewnik said. “We had been in a stressful situation since the beginning of the war — we had a lot of refugees at first,” he said. “But we got used to it.”

While the village remains shaken, the fears of a widening war eased Wednesday after Polish President Andrzej Duda and NATO Secretary General Jens Stoltenberg said the strike was inadvertent, the result of a stray missile fired by Ukraine as part of its air defenses against a heavy Russian bombing campaign that hit infrastructure targets and cities across Ukraine, including Lviv, just 75 miles away.

Duda said the explosion in Przewodow appeared to be an “unfortunate accident,” but that investigations were ongoing. Ukrainian President Volodymyr Zelensky has insisted the missile was not fired by Ukraine’s military — an assertion he reiterated in public statements Wednesday in which he demanded access to the explosion site and “proof.”

On Wednesday, the tiny village was a surreal hubbub of activity.

Police blocked off the scene of the blast while scores of journalists set up television positions on the streets. Convoys of military and police vehicles trundled past police cordons.

Photographs of the blast site, published by local media, showed a jumble of debris including wooden beams piled in a crater carved out of the earth, as well as a tractor and an overturned trailer with grain scattered beneath it. Investigators wearing gloves and white protective suits collected evidence.

Other photos posted on social media showed missile fragments, which Duda identified as a Russian-manufactured S-300 surface-to-air missile. The S-300 is used by both the Russian and Ukrainian militaries, and Duda said there was no evidence the missile was fired by Russia.

The local school in Przewodow, which serves just 71 students, did not hold classes Wednesday but was instead turned into an impromptu press center. Psychological counselors were brought in for children and adults.

“All the emotions have woken up again,” Ewa Byra, the director of the local school, said Wednesday evening.

One of the victims, 62-year-old Boguslaw Wos, was married to a school employee, who rushed to the scene of the explosion shortly after the blast occurred, her colleagues said.

“She ran toward the explosion asking where her husband was,” said Renata, the school’s 58-year old janitor who declined to give her last name. The woman has preferred to stay at school rather than return home alone. If she goes home, she can’t stop crying, Renata said.

The other victim, Bogdan Ciupek, 60, lived in a neighboring village.

Poland has a long history of tense relations with Moscow, as the capital of Russia or the Soviet Union. In 1939, Nazi Germany and the Soviet Union reached a secret deal to partition Poland, and then invaded aiming to divide the country between them. Przewodow was part of the territory occupied by the Soviets.

Now, as part of NATO and the European Union, Poland has signed treaties allowing it to seek assistance from some of the world’s strongest military powers, including the United States, Britain, and France — each of which expressed support and solidarity in the tense hours after the missile fell in Przewodow.

The two victims were well known in the tightknit community, where nearly everyone felt the explosion, which thundered through homes and rattled windows.

Father Bogdan Wazny, the local priest, was in his church reading a book when the missile struck at about 3.40 p.m. At first, like other residents, he thought it might be a gas explosion. Some residents reported hearing two large bangs.

Wazny said he did not imagine that Russia’s war in Ukraine had spilled over into Poland.

“The border that is here also mentally cuts us off from the war,” he said.

Life in Przewodow is quiet, the priest said, with residents’ main complaints being lack of public transport and amenities. He said his relatives could never remember the name of the village. Now, he suspects, they will never forget it.

“Unfortunately for this tragic reason,” Wazny said after presiding over evening mass Wednesday, which was held in remembrance of the two parishioners who lost their lives.

Only four residents showed up, weeping quietly in the pews at St. Albert Chmielowski Church. They were far outnumbered by journalists. Generally, fewer than 10 people attend weekday services, Wazny said, adding that the community remained in shock.

“The deaths of two people are a tragic event, but especially for such a small community where everyone knows each other,” he said. The two victims had helped renovate the church, he said.

“This is a simple village,” said Tomak Boguslaw, 35, as he chatted with friends outside the local shop, which was cut off from the main road by police cordons.

Now conversations had turned to funerals and complicated issues like Article 5 — the collective defense provision in NATO’s founding treaty. “It really is a tragedy,” Boguslaw said.