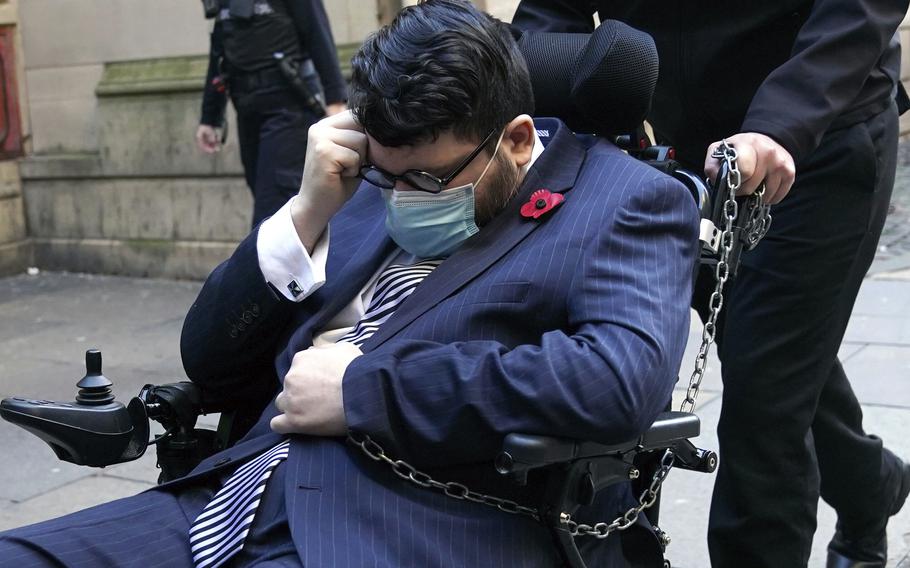 The defendant authorities believe to be Nicholas Rossi arrives for a hearing in Edinburgh on Wednesday Nov. 9, 2022. (Jane Barlow/PA via AP)

A Scottish judge ruled on Friday that a man who was arrested last year in a Glasgow hospital — and who claimed to be an Irish orphan living in Scotland — is in fact a fugitive who faked his own death nearly three years ago to flee criminal charges in the United States.

Nicholas Rossi, 35, will now face further extradition proceedings to determine whether he should be sent home to be tried on felony rape charges in Utah, where he is wanted in connection with a sexual assault in 2008, according to the Utah Department of Public Safety.

“I am ultimately satisfied on the balance of probabilities . . . that Mr. Knight is indeed Nicholas Rossi, the person sought for extradition by the United States,” the judge, Norman McFadyen, said, citing fingerprint, tattoo and photographic evidence. McFadyen called Rossi’s claims, including that he is an Irish-born orphan named Arthur Knight, “implausible” and “fanciful.”

Scottish authorities arrested Rossi, also known by an alias, Nicholas Alahverdian, in December 2021 after tracking him to the covid-19 ward of a Glasgow hospital. Staffers there had recognized him and his tattoos from an Interpol notice, the Scottish Sun reported.

For the past 11 months, Rossi, who attended court in a wheelchair, has dragged out the legal proceedings, firing multiple lawyers, changing his accent and accusing law enforcement of torture. He also claimed that authorities tried to frame him by giving him tattoos similar to those of the wanted man while he was in a coma, as well as by taking and sending his fingerprints to Interpol.

Before fleeing to the United Kingdom, Rossi faked his own death. In February 2020, just weeks after the FBI questioned him regarding a fraud case in Ohio, Rossi, who was living in Rhode Island, posted an obituary online that said he died of cancer.

“His last words were ‘fear not and run toward the bliss of the sun,’” the obituary said, adding that his hospital room was “filled with the sounds of the end credits for the 1997 film ‘Contact’ by composer Alan Silvestri.”

Known then as Nicholas Alahverdian, a child welfare reform advocate, he was honored in death by the Rhode Island legislature, and the mayor of Providence, the state capital, issued a statement lamenting the loss of a “beloved community leader.”

A year later, however, the Providence Journal reported that state police did not believe he was dead. Now, he is wanted in Rhode Island, accused of failing to register as a sex offender.

In Utah, authorities had retested DNA from a 2008 sexual assault kit, and results showed it matched Rossi’s profile from a similar charge at a community college in Ohio. The State Bureau of Investigations now says it has identified Rossi as a suspect in similar cases throughout Utah and elsewhere in the United States.

On Wednesday, court officers told Rossi that two more women came forward with accusations of sexual offenses in Utah in 2008, according to the Scottish Sun.

In an interview with BBC Scotland, one of the women who accused Rossi of sexual assault said, “He is trying to fool everybody, and I’m glad so many people see through it.”