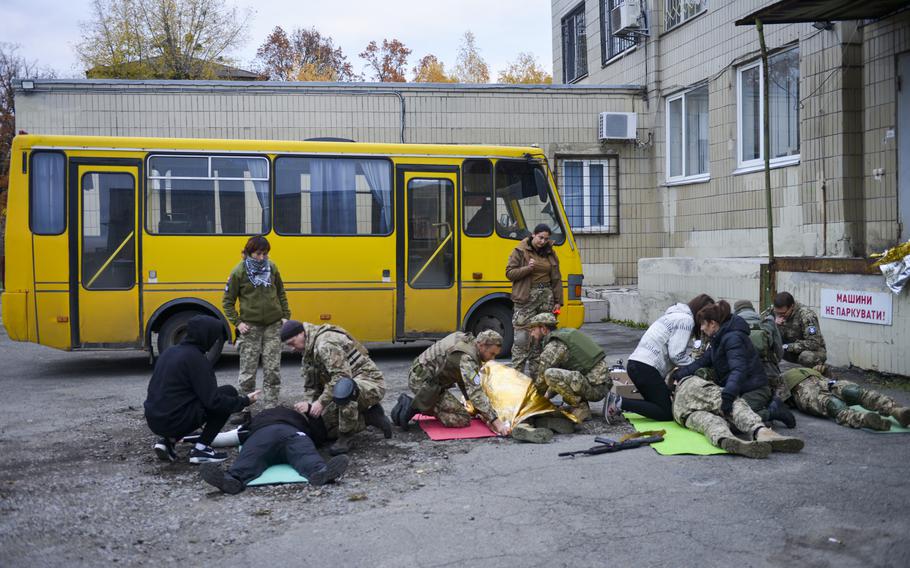 Ukrainian soldiers and civilians practice first aid under the watchful gave of instructors at a training site on the outskirts of Kyiv, Ukraine, Oct. 27, 2022. (J.P. Lawrence/Stars and Stripes)

RIGA, Latvia — Steep Russian casualties in key battles in eastern Ukraine have prompted an unusual public outcry — and sharp criticism of military commanders — by surviving soldiers, and family members of recently conscripted fighters, who say their units were led to slaughter in poorly planned operations.

The uproar over battlefield losses near Vuhledar in the Donetsk region prompted an official statement from the Russian Defense Ministry, which sought to play down the reportedly high death toll among soldiers in the 155th Separate Guards Marine Brigade, which led Moscow’s offensive in the area.

It was the first time since the start of Russia’s invasion that the ministry has officially responded to reports of mass casualties and criticism of commanders on Telegram, the main platform used by officials as well as by reporters and bloggers covering the Russian war.

Criticizing the war — or even calling it a war rather than a “special military operation” — is illegal in Russia. But the Kremlin in recent months has tolerated criticism of the military’s poor performance by pro-war hawks who back the invasion, including some demanding even more brutal tactics in Ukraine.

On Sunday, pro-Kremlin military correspondents posted the text of a letter sent by the members of the 155th brigade, which is normally based in Russia’s Far East, decrying the order that sent them into what they called “an incomprehensible offensive” in the village of Pavlivka, in Ukraine’s Donetsk region.

“As a result of the ‘carefully’ planned offensive by the ‘great generals,’ we lost about 300 people killed, wounded and missing as well as half the equipment in four days,” the letter said. It was addressed to Gov. Oleg Kozhemyako of the Primorsky region, which lies on the coast of the Sea of Japan.

Nearly 6,000 miles away, in eastern Ukraine, the weather had turned for the worse in Pavlivka, with rain muddying the roads and making reinforcement of troops in the area even more difficult, the commander of the pro-Russian Vostok battalion, Alexander Khodakovsky, wrote on Telegram over the weekend.

“My fears about Pavlivka were justified,” Khodakovsky said, adding that he felt the advancement in the area initiated by Russian commanders had been “premature.”

The letter also specifically criticized Rustam Muradov, the commander of Russia’s Eastern Military District, who was appointed in October. Earlier in the war, Muradov led the Vostok grouping of forces which was responsible for operations in eastern areas of Donetsk and Luhansk.

Officially, the military did not give the reason for the reassignment, but it came after the Russian military suffered a defeat in Lyman, a key logistics and supply hub in Donetsk area. The embarrassing defeat in occurred a day after Russian President Vladimir Putin declared Donetsk and three other Ukrainian regions to be annexed by Russia — a violation of international law.

The Russian chain of command has appeared to be in constant disarray throughout the war as Moscow repeatedly switched overall commanders and replaced top generals in all four of its military districts.

Most recently, Russian media reported that Col. Gen. Alexander Lapin no longer runs the Central Military District after he was repeatedly bashed by Chechen leader Ramzan Kadyrov and Yevgeniy Prigozhin, Putin’s ally and the financier of Wagner mercenary group, over strategic missteps and the poor performance of his troops.

The governor, Kozhemyako, at first dismissed the letter as a “potential fake planted” by Ukrainians but later issued a video message saying he had contacted the officers on the front line who confirmed there had been heavy fighting and losses but, he said, “the number is as not as high as it’s written in this letter.”

“Due to the competent actions of the commanders, the losses among the marines over this period do not exceed 1 percent of the combat personnel and 7 percent of the wounded, a significant part of whom have already returned to duty,” the Russian defense ministry said in its statement, issued on Monday.

The ministry added that the 155th Brigade had been fighting near the regional hub of Vuhledar for more than 10 days and advanced “five kilometers deeps into Ukrainian positions.”

Many pro-war commentators in Russia have been urging the ministry to be more transparent about its defeats. But rather than mollify these critics, the statement only inflamed their anger by minimizing the extent of the losses.

“So far it looks like that the military, having noticed another impending wave of discontent, decided to quickly subcontract the authorities of the region to their side and marginalize the whole situation, once again pretending that nothing is happening,” wrote a popular blogger who writes under the moniker Military Informer. “We hope this situation will change.”

Moscow’s top brass are also now trying to fend off another public scandal after residents of Voronezh, a city in a strategic Russian region near the Ukrainian border, complained that recently conscripted men from the region had been sent unprepared to Svatove, a town in the Luhansk region that has been the site of fierce battles. Hundreds may have died, according to Russian outlet Verstka.

“For three days they were under shelling, they tried to survive the best they could . . . they had no food and no sleep, they held up for three days and didn’t flee, unlike their commanding officers,” Inna Popova, the wife of a soldier, said in a video address recorded by the soldiers’ family members, and posted by Verstka.

“Please help us rescue our mobilized [men] and remove them from the first line of defense,” Popova said, adding that her husband had been mobilized on Oct. 12 and sent to Ukraine soon after.

Russian officials repeatedly asserted that the new conscripts, called up amid an unpopular mobilization effort initiated by Putin to replenish his army after several setbacks, would be tasked mainly with controlling already occupied areas and supporting the rear, and not to serve as the main advancing force.

Moscow took control of the Luhansk region early in the war but its grip on the territory is under threat after Russian troops suffered a defeat near Kharkiv in September and lost Lyman, in the area Col. Gen. Lapin was responsible for, according to Russian media.

If Russia loses Svatove, Ukrainian forces likely will be able to advance further into Luhansk, regaining much of the territory that Putin claimed to be annexed and absorbed into Russia.

Verstka, citing family members, reported that men mobilized in Voronezh ended up on the front line after just a few days of training, likely a decision by their commanders aimed at closing the gaps in defensive lines and rotating out exhausted troops.

Two servicemen from the Voronezh region told Verstka that only a few dozen men from more than 500 solders in their unit have been accounted for since the intense shelling last week.

Pro-Kremlin Telegram channel “War on Fakes,” which is often quoted by the Defense Ministry, dismissed the reports as false.

The Voronezh region governor, Alexander Gusev, said Sunday that he had met with the family members who recorded the video address. Gusev’s press service did not refute reports of mass causalities, and a local news outlet deleted a report that had called the information fake.

“The situation is quite difficult in terms of finding objectivity, so we do not take responsibility for making such statements and discussing any figures and facts,” the press service told local pool journalists, according to a screenshot posted by a journalist in the pool.

Russia has officially sent a reinforcement of 50,000 mobilized men to Ukraine in recent weeks with at least another 250,000 soldiers still in training, Putin said Monday during a government meeting.

Russia and Ukrainian forces are each preparing for a bitter winter that will complicate virtually every aspect of the war, from logistics to morale to the physical health of the troops.

For Ukraine, the approaching cold temperatures will be increasingly difficult to brace after weeks of Russia attacks on the country’s energy infrastructure.

In Kyiv, the capital, Monday passed in relative quiet without air raid sirens or damage from Russian missiles — a welcome change for residents who have grown used to Monday morning strikes over the past month.

But the attacks have forced authorities to plan blackouts around the capital and in other parts of the country to relieve the strain on the energy grid, and millions in the capital and its vicinity were without power overnight.