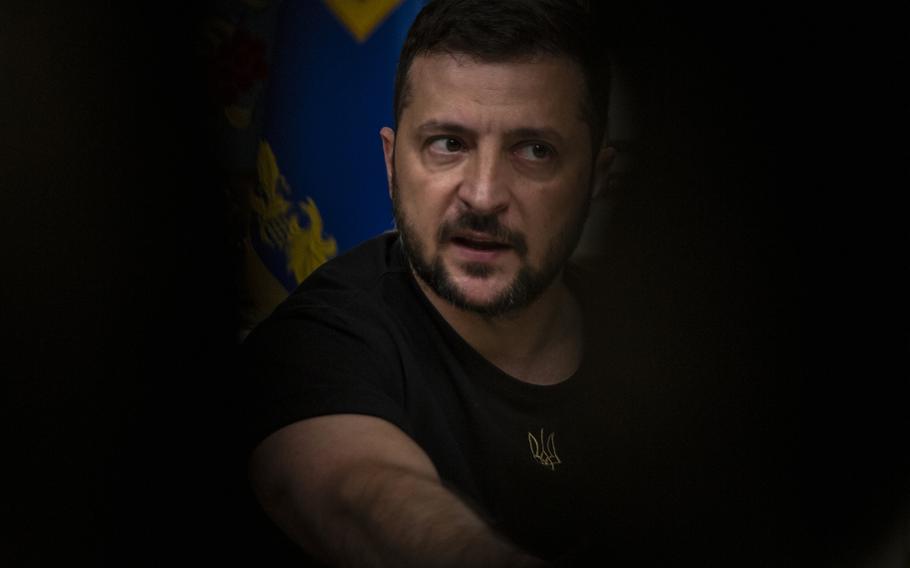 The Biden administration is privately encouraging Ukraine's leaders to signal an openness to negotiate with Russia and drop their public refusal to engage in peace talks unless President Vladimir Putin is removed from power, according to people familiar with the discussions.

The request by American officials is not aimed at pushing Ukraine to the negotiating table, these people said. Rather, they called it a calculated attempt to ensure the government in Kyiv maintains the support of other nations facing constituencies wary of fueling a war for many years to come.

The discussions illustrate how complex the Biden administration's position on Ukraine has become, as U.S. officials publicly vow to support Kyiv with massive sums of aid "for as long as it takes" while hoping for a resolution to the conflict that over the past eight months has taken a punishing toll on the world economy and triggered fears of nuclear war.

While U.S. officials share their Ukrainian counterparts' assessment that Putin, for now, isn't serious about negotiations, they acknowledge that President Volodymyr Zelensky's ban on talks with him has generated concern in parts of Europe, Africa and Latin America, where the war's disruptive effects on the availability and cost of food and fuel are felt most sharply.

"Ukraine fatigue is a real thing for some of our partners," said one U.S. official who, like other interviewed for this report, spoke on the condition of anonymity to discuss sensitive conversations between Washington and Kyiv.

Serhiy Nikiforov, a spokesman for Zelensky, did not respond to a request for comment.

In the United States, polls show eroding support among Republicans for continuing to finance Ukraine's military at current levels, suggesting the White House may face resistance following Tuesday's midterm elections as it seeks to continue a security assistance program that has delivered Ukraine the largest such annual sum since the end of the Cold War.

In a trip to Kyiv on Friday, White House national security adviser Jake Sullivan said the United States supported a just and lasting peace for Ukraine, and said U.S. support would continue regardless of domestic politics. "We fully intend to ensure that the resources are there as necessary and that we'll get votes from both sides of the aisle to make that happen," he said during a briefing.

Eagerness for a potential resolution to the war has intensified as Ukrainian forces recapture occupied territory, pushing closer to areas prized by Putin. Those begin with Crimea, which Russia illegally annexed in 2014, and include cities along the Azov Sea that now provide him a "land bridge" to the Ukrainian peninsula. Zelensky has vowed to fight for every inch of Ukrainian territory.

Veteran diplomat Alexander Vershbow, who served as U.S. ambassador to Russia and deputy secretary general of NATO, said the United States could not afford to be completely "agnostic" about how and when the war is concluded, given the U.S. interest in ensuring European security and deterring further Kremlin aggression beyond Russia's borders.

"If the conditions become more propitious for negotiations, I don't think the administration is going to be passive," Vershbow said. "But it is ultimately the Ukrainians doing the fighting, so we've got to be careful not to second guess them."

While Zelensky laid out proposals for a negotiated peace in the weeks following Putin's Feb. 24 invasion, including Ukrainian neutrality and a return of areas occupied by Russia since that date, Ukrainian officials have hardened their stance in recent months.

In late September, following Putin's annexation of four additional Ukrainian regions in the east and in the south, Zelensky issued a decree declaring it "impossible" to negotiate with the Russian leader. "We will negotiate with the new president," he said in a video address.

That shift has been fueled by systematic atrocities in areas under Russian control, including rape and torture, along with regular airstrikes on Kyiv and other cities, and the Kremlin's annexation decree.

Ukrainians have responded with outrage when foreigners have suggested they yield areas of their country as part of a peace deal, as they did last month when billionaire Elon Musk, who has helped supply Ukraine's military with satellite communication devices, announced a proposal on Twitter that could allow Russia to cement its control of parts of Ukraine via referendum and give the Kremlin Crimea.

"If Russia wins, we will get a period of chaos: flowering of tyranny, wars, genocides, nuclear races," presidential adviser Mykhailo Podolyak said Friday. "Any 'concessions' to Putin today - a deal with the Devil. You won't like its price."

Ukrainian officials point out that a 2015 peace deal in the country's eastern Donbas region — where Moscow backed a separatist campaign — only provided Russia time before Putin launched his full-scale invasion this year. They question why any new peace deal would be different, arguing that the only way Russia will be prevented from returning for further attacks is vanquishing its military on the battlefield.

Russia, facing a poor position on the battlefield, has proposed negotiations but in the past has proved unwilling to accept much other than Ukrainian capitulation.

"Cynically, Russia and its Western supporters are holding out an olive branch. Please do not be fooled: An aggressor cannot be a peacemaker," Andriy Yermak, head of the Ukrainian presidential administration, wrote in a recent op-ed published by The Washington Post.

Ukrainian officials also question how they can conduct negotiations with Russian leadership who fundamentally believe in Moscow's right to hegemony over Kyiv.

Putin has continued to undermine the notion of a sovereign and independent Ukraine, including in remarks last month when he once again asserted Russians and Ukrainians were one people, and argued that Russia could be "the only real and serious guarantor of Ukraine's statehood, sovereignty and territorial integrity."

While Western officials also hold profound skepticism of Russia's aims, they have chafed at Ukraine's harsh public rebukes as Kyiv remains entirely dependent on Western assistance. Swiping at donors and ruling out talks could hurt Kyiv in the long run, officials say.

The maximalist remarks on both sides have increased global fears of a years-long conflict spanning the life of Russia's 70-year-old leader, whose grip on power has only tightened in recent years. Already the war has deepened global economic woes, helping to send energy prices soaring for European consumers and causing a surge in commodity prices that worsened hunger in nations including Somalia, Yemen and Afghanistan.

In the United States, rising inflation partially linked to the war has stiffened head winds for President Joe Biden and his party ahead of the Nov. 8 midterms and raised new questions about the future of U.S. security assistance, which has amounted to $18.2 billion since the war began. According to a poll published Nov. 3 by the Wall Street Journal, 48 percent of Republicans said the United States was doing "too much" to support Ukraine, up from 6 percent in March.

Progressives within the Democratic Party are calling for diplomacy to avoid a protracted war, releasing but later retracting a letter calling on Biden to redouble efforts to seek "a realistic framework" for a halt to the fighting.

The concerns about a longer conflict are particularly salient in nations that were already hesitant to throw their weight behind the U.S.-led coalition in support of Ukraine, either because of ties with Moscow or reluctance to fall in line behind Washington.

South Africa abstained from a recent United Nations vote that condemned Russia's annexation decrees, saying the world must instead focus on facilitating a cease fire and political resolution. Brazil's new president-elect, Luiz Inácio Lula da Silva, has said Zelensky is as responsible for the war as Putin.

Indian Prime Minister Narendra Modi, who has tried to maintain good relations with Moscow and Kyiv, offered assistance on peace talks in a call with Zelensky last month. He was spurned by the Ukrainian leader.

Zelensky told him Ukraine would not conduct any negotiations with Putin but said Ukraine was "committed to peaceful settlement through dialogue," according to a statement released by Zelensky's office. The statement noted that Russia had deliberately undermined efforts at dialogue.

Despite Ukrainian leaders' refusal to talk to Putin and their vow to fight to retake all of Ukraine, U.S. officials say they believe that Zelensky would probably endorse negotiations and eventually accept concessions, as he suggested he would early in the war. They believe that Kyiv is attempting to lock in as many military gains as it can before winter sets in, when there might be a window for diplomacy.

Zelensky faces the challenge of appealing both to a domestic constituency that has suffered immensely at the hands of Russian invaders and a foreign audience providing his forces with the weapons they need to fight. To motivate Ukrainians domestically, Zelensky has promoted victory rather than settlement and become a symbol of defiance that has motivated Ukrainian forces on the battlefield.

While members of the Group of Seven industrialized bloc of nations seemingly threw their weight behind a Ukrainian vision of victory last month, endorsing a plan for a "just peace" including potential Russian reparation payments and security guarantees for Ukraine, some of those same countries see a potential turning point if Ukrainian forces approach Crimea.

Reports of a Russian withdrawal from the southern city of Kherson have raised the question of whether Ukrainian forces could eventually march on the strategic peninsula, which U.S. and NATO officials believe Putin views differently than other areas of Ukraine under Russian control, and what a likely all-out fight for Crimea would mean for Kyiv's backers in the West.

Not only has Crimea been under direct Russian control for longer than areas seized since February, it has long been the site of a Russian naval base and is home to many retired Russian military personnel.

Illustrating Russia's elevation of Crimea, the Kremlin responded to an explosion last month on a bridge linking the region to mainland Russia — a symbol of Moscow's grip of the peninsula - by launching a barrage of missiles on Ukrainian cities, including Kyiv, ending a long period of peace in the capital.

In the meantime, Ukrainian leaders continue to telegraph their intention to pursue total victory, not only to their beleaguered citizens but to Moscow.

Zelensky told an interviewer on Wednesday that the first thing he would do after Ukraine prevails in the war would be to visit a recaptured Crimea. "I really want to see the sea," he said.