Hannah Pick-Goslar, friend and memory-keeper of Anne Frank, dies at 93 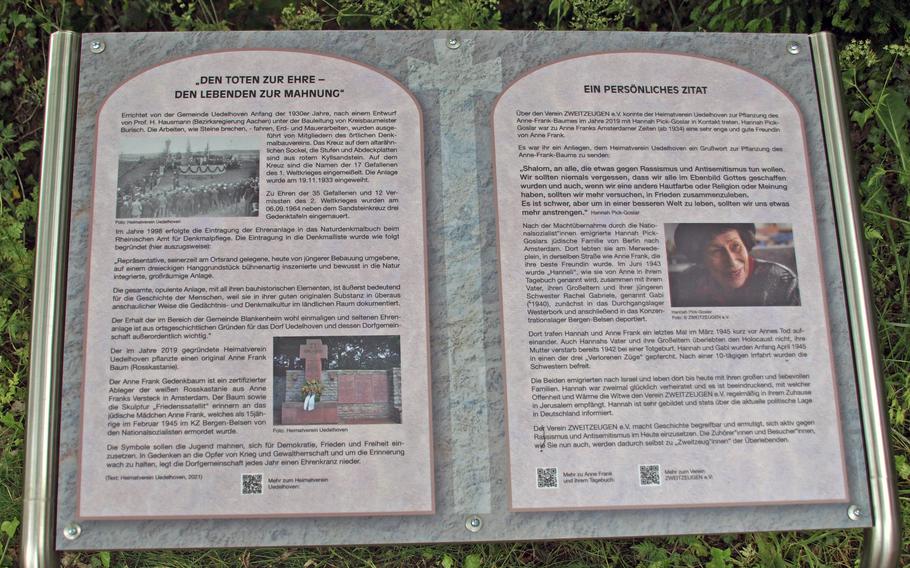 An information board for the memorial of Anne Frank featuring Hannah Pick-Goslar. In the decades after World War II, Hannah Pick-Goslar traveled around the world as a living link to Anne Frank and a guardian of the memory of the other 1.5 million Jewish children who perished in the Holocaust. (Wikimedia Commons)

Hannah Pick-Goslar remembered it well, the diary with the red checkered cover and elegant metal clasp that Anne Frank received for her 13th birthday in 1942. The girls had been schoolmates and friends for nearly as long as they could remember. From the first day of kindergarten they were inseparable.

Like Anne, Pick-Goslar was a German-born Jew and had sought refuge in the Netherlands with her family shortly after Hitler came to power. She was half a year older than Anne and, by her own account, almost nothing like her. Anne was the popular one, a chatterbox content to be the center of attention. Hanneli, as Pick-Goslar was called, was more reserved, with none of what she described as Anne’s “feisty” streak.

And yet the girls shared a bond that would endure the vicissitudes of adolescence and transcend their separation when Anne and her family went into hiding to evade capture by the Nazis. For more than two years, until their arrest on Aug. 4, 1944, Anne’s diary served as a repository for her thoughts and fears. First published in Dutch in 1947 and later adapted to acclaim for the stage and screen, it has sold more than 30 million copies in 70 languages and remains perhaps the most famous document of the Holocaust.

For Pick-Goslar, the diary was a revelation of the interior life of her cherished friend, a budding author who liked to bring her journal to school and write between lessons. When curious classmates asked what she was writing, Pick-Goslar recalled, Anne deflected their inquiries. “None of your business,” she said Anne would reply.

Pick-Goslar encountered Anne for the last time on the other side of a barbed-wire barrier at Bergen-Belsen, the Nazi concentration camp in northern Germany where both were imprisoned, and where Anne and her older sister, Margot, died of typhus two months before the camp was liberated in April 1945.

Pick-Goslar was among the last people to see Anne alive, according to Gertjan Broek, a senior researcher at the Anne Frank House in Amsterdam. In the decades after World War II, she traveled around the world as a living link to Anne Frank and a guardian of the memory of the other 1.5 million Jewish children who perished in the Holocaust.

Pick-Goslar, 93, died Oct. 28 at her home in Jerusalem. The cause was a heart ailment, said her son Chaim Pick. Her story was recorded in the book “Memories of Anne Frank: Reflections of a Childhood Friend” (1997) by Alison Leslie Gold and was dramatized in a Dutch film released last year on Netflix, “My Best Friend Anne Frank.” Her memoir, “My Friend Anne Frank,” written with journalist Dina Kraft, is slated for publication next June, on the occasion of what would have been Anne Frank’s 94th birthday.

Hannah Elisabeth Charlotte Goslar was born in Berlin on Nov. 12, 1928. Her father was a prominent Zionist and served in the Weimar government as a deputy minister in charge of the press bureau. Her mother, a schoolteacher, died giving birth to a stillborn baby in 1942, leaving Hanneli to help care for her younger sister, Gabi.

After Hitler became chancellor in 1933, the Goslars moved to London and then to Amsterdam, where Hanneli’s father earned a modest income assisting other refugees. Hanneli was grocery shopping with her mother when they met Anne and her mother, Edith Frank, who were also newly arrived from Germany. Hanneli was 5; Anne was 4. Neither yet spoke Dutch.

On the first day of kindergarten, Hanneli spotted Anne in her class. “She was making music with bells,” Pick-Goslar told an interviewer. Anne “turned around and ran into my arms and I ran into hers, and from then on we were friends.”

The girls lived next door for years and filled their days with games of hopscotch, marbles and jump rope. As they grew older, they and other girls played ping-pong and collected photographs of European royalty.

They sometimes went to work with Anne’s father, Otto Frank, dialing each other on the office telephones and plotting pranks. A portion of the office, which was located on Amsterdam’s Prinsengracht canal, would serve as the Franks’ hiding place, the Secret Annex, whose entrance was disguised by a movable bookcase.

“Hanneli Goslar, or Lies as she’s called at school, is a bit on the strange side,” Anne wrote in one of her earliest diary entries, on June 15, 1942. “She’s usually shy - outspoken at home, but reserved around other people. She blabs whatever you tell her to her mother. But she says what she thinks, and lately I’ve come to appreciate her a great deal.”

The Goslars were more religiously observant than the Franks, but the two families sometimes celebrated the Shabbat together. In her recollections of Anne, Pick-Goslar added dimension to the portrait that emerges from the pages of her diary.

“My fiery Anne was ebullient, precocious, boy-crazy,” she once told the Times of London. Remarking on Anne’s insistence on her own point of view, Pick-Goslar’s mother observed that “God knows everything, but Anne knows better.”

After the Nazis invaded the Netherlands in May 1940, Anne and Hanneli were forced to attend a Jewish school. The Franks went into hiding after Margot received an order to report for a work camp. Pick-Goslar learned they were gone when she knocked on their door and a lodger relayed a rumor that they had fled to Switzerland.

Anne and her family were joined in hiding by four other Jews - Hermann and Auguste van Pels and their son, Peter, and a dentist named Fritz Pfeffer. In her diary, Anne chronicled their day-to-day activities and reflected on the past and future, for what she could imagine of it. She wrote several times about Hanneli, unburdening herself of regrets about how she had treated her old friend while exploring new acquaintances. She confessed feelings of guilt about her own relative safety in hiding while Hanneli remained on the outside, her fate as yet unknown to Anne.

On June 20, 1943, Pick-Goslar and her family were arrested in a roundup and taken to the Westerbork transit camp in the Netherlands. In February of the following year, they were transferred to Bergen-Belsen.

“I saw her in front of me, clothed in rags, her face thin and worn,” Anne wrote on Nov. 27, 1943, describing a dream in which she said Hanneli had appeared before her. “Her eyes were very big and she looked so sadly and reproachfully at me that I could read in her eyes: ‘Oh, Anne, why have you deserted me? Help, oh, help me, rescue me from this hell!”

Hanneli returned to Anne in another dream the following month. “Dear God, watch over her and bring her back to us,” Anne wrote on Dec. 29, 1943. “Hanneli, you’re a reminder of what my fate might have been. I keep seeing myself in your place.”

The circumstances that led to the Franks’ arrest have never been conclusively determined. They were taken to Westerbork and then Auschwitz, the Nazi death camp in occupied Poland, where Edith Frank ultimately perished. Margot and Anne were transferred to Bergen-Belsen in November 1944. Pick-Goslar learned that a group of Dutch women had arrived at the camp. Among them was Auguste van Pels, who informed her that Anne was there, too.

In February 1945, Anne and Hanneli were reunited. They could not see each other because the barbed-wire fence dividing them was stuffed with straw, but Pick-Goslar immediately recognized her friend’s voice.

“What are you doing here?” Pick-Goslar recalled asking. “You were supposed to be in Switzerland.”

Through tears, they told each other of everything they had endured. Otto Frank by then had been liberated from Auschwitz, but Anne did not know and believed both her parents to be dead. With Margot near death, Anne had no reason to live, she told Hanneli.

“Anne’s not the same person,” Pick-Goslar recalled thinking. “Neither am I. We’re broken girls.”

Risking her life by leaving her assigned area in the camp, Pick-Goslar repeatedly returned to the barrier in attempts to toss bits of food and other supplies to her friend - “a crust of bread or a sock or a glove, anything that gave a little warmth,” she said. Then Anne was apparently transferred to another section of Bergen-Belsen, and they never saw each other again.

“The fact that I survived and she didn’t is just a cruel accident,” Pick-Goslar said.

Pick-Goslar and her sister were the only members of their immediate family to survive the Holocaust. When they returned to the Netherlands, Pick-Goslar was seriously ill. Widowed and childless, Otto Frank had also returned home and looked after them “like a father,” journalist Melissa Müller wrote in a 1998 biography of Anne Frank.

He helped the two sisters make their way to Switzerland, where they lived in the care of relatives before Hanneli immigrated to what was then the British Mandate for Palestine in 1947. Her sister later followed.

In Israel, Pick-Goslar became a pediatric nurse. Her first husband, Pinchas Walter Pick, died in 1985 after three and a half decades of marriage. Four years later, she married David Cohn. He died in 1992.

Survivors include three children from her first marriage, Yochanan Pick and Ruthie Meir, both of Jerusalem, and Chaim Pick of Tel Aviv; her sister, now known as Rachel Moses; 11 grandchildren; and more than 30 great-grandchildren. She described her large family as her “answer to Hitler.”

Pick-Goslar remained in touch with Otto Frank until his death in 1980 at age 91.

Just as Anne felt Hanneli’s presence in hiding and saw her friend in dreams, Pick-Goslar said she often felt Anne was with her when she spoke about their lives.

“Anne’s diary . . . stops right in the middle one morning when Anne and the others in hiding were arrested by the Nazis,” Pick-Goslar observed. She offered her testimony, she added, in the hope that it might “fill in what really happened - as horrible as it was - to my friend after the diary ends.”