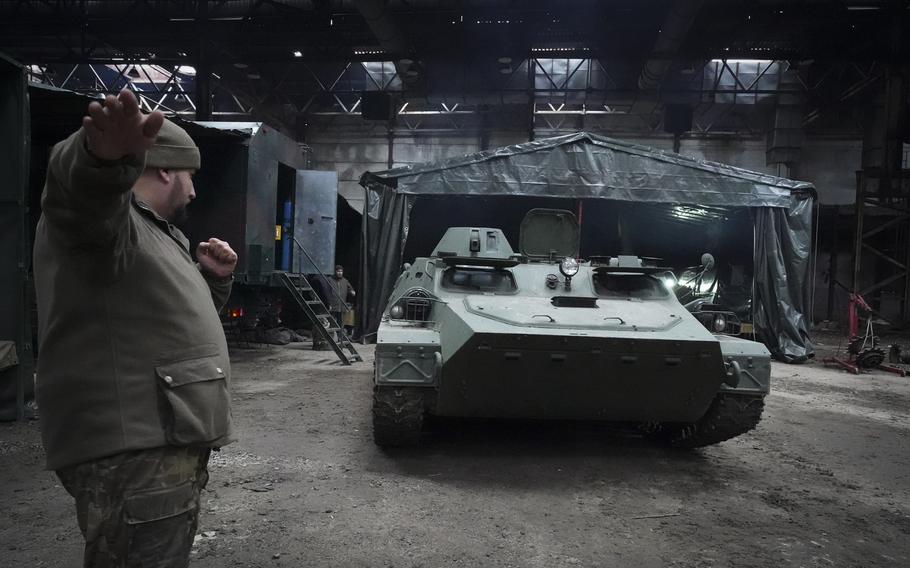 KYIV, Ukraine — The UN's nuclear agency said Thursday that its inspectors found no evidence to support Russia's claim that Ukraine planned to build and detonate a radioactive "dirty bomb" with the intent of blaming it on Moscow.

The International Atomic Energy Agency said the inspections requested by the Ukrainian government "did not find any indications of undeclared nuclear activities and materials." The agency said its experts carried out inspections in three locations in Ukraine and were given unfettered access to the sites.

"Based on the evaluation of the results available to date and the information provided by Ukraine, the agency did not find any indications of undeclared nuclear activities and materials at the locations," the agency said in a statement.

Top Russian officials, including President Vladimir Putin, have made repeated unfounded claims that Ukraine planned to detonate a bomb that scatters radioactive waste in a false flag operation it would try to pin on Moscow.

Western nations had called Moscow's unproven allegation "transparently false." Ukrainian authorities dismissed it as an attempt to distract attention from alleged Russian plans to set off a dirty bomb as a way to justify an escalation of hostilities.

As fighting in Ukraine has damaged power lines and electrical substations, the Zaporizhzhia Nuclear Power Plant has repeatedly operated on backup generators to cool its reactors and keep other safety systems running until regular power could be restored. The generators have enough fuel to maintain the plant in southeastern Ukraine for just 15 days, state nuclear power comany Energoatom said on its Telegram channel.

"The countdown has begun," Energoatom said, noting it had limited possibilities to "maintain the ZNPP in a safe mode," raising fears of a potential nuclear disaster.

The International Atomic Energy Agency said Thursday that the plant's latest switch to backup power further underlines "the extremely precarious nuclear safety and security situation at the facility and the urgent need to establish a protection zone around it."

Relying on diesel generators "is clearly not a sustainable way to operate a major nuclear facility," Grossi added. "Measures are needed to prevent a nuclear accident at the site. The establishment of a nuclear safety and security protection zone is urgently needed."

The plant's six reactors are not in operation, but outside electricity is needed to cool its spent fuel. Russia and Ukraine have traded blame for months amid the war for shelling at and around the plant that the IAEA has warned could cause a radiation emergency.

The official, Renat Karchaa, said the move deprived the city of Energodar, where plant's workers live, of heating. He confirmed that emergency backup diesel generators had to be switched on to cool the reactors and run other safety systems, but denied the problems had been caused by Russian shelling of power lines.

Russian forces occupied the plant during the early days of the war. The plant is located in the Zaporizhzhia region, part of which has been occupied by Russian forces and illegally annexed, along with three other provinces, by Russian President Vladimir Putin last month.

Although Putin signed a decree transferring the nuclear plant to Russian ownership, Ukrainian workers continue to run the plant.

The latest loss of reliable electricity overnight came when Russia shelled two power lines that were connecting the plant to the Ukrainian grid in "an attempt to reconnect the nuclear plant to the Russian power system," Energoatom alleged.

Other Ukrainian cities were also hit, with Russia using drones, missiles and heavy artillery that left six civilians dead and 16 others wounded, according to the president's office. Energy and water facilities were struck in Zelenskyy's native city of Kryvyi Rih, leaving several districts without electricity or water.

Further east in the Donetsk region, battles continued for the towns of Bakhmut and Avdiivka, where authorities said the population was under constant shelling and living without electricity or heat. Over the past day, six cities and villages in the region came under attack from heavy artillery, while in the northeast, three missiles hit Ukraine's second-largest city, Kharkiv, officials said.

Separately, seven ships carrying 290,000 tons of agricultural products set sail from Ukrainian seaports heading to Asia and Europe, a day after Russia agreed to rejoin a wartime agreement allowing the export of Ukrainian grain and other commodities.

In announcing Russia was rejoining the pact, Putin said Moscow had received assurances that Ukraine wouldn't use the humanitarian corridors to attack Russian forces.

Kremlin spokesman Dmitry Peskov cautioned Thursday that Russia's decision to rejoin did not mean the deal would be extended after it expires on Nov. 19.

Russia had suspended its participation in the grain deal over the weekend, citing an alleged drone attack against its Black Sea fleet in Crimea. Ukraine didn't claim responsibility for an attack, and Zelenskyy said Wednesday that Moscow's return to the agreement showed "Russian blackmail did not lead to anything."

In Moscow, the Russian Foreign Ministry summoned British Ambassador Deborah Bronnert on Thursday in connection with the alleged participation of British instructors in the Oct. 29 attack by drones on Black Sea fleet facilities in Sevastopol, Crimea. Bronnert made no comment after the meeting.

Russian Foreign Minister Sergey Lavrov said Thursday he hadn't seen progress regarding the export of Russian fertilizers and grain, despite the reimplementation of the Ukrainian part of the U.N.-sponsored grain deal.

Speaking to reporters, Lavrov also said Russia was pleased that the Ukrainian leadership had signed guarantees "that no attempts would be made to use humanitarian routes in the Black Sea for military purposes."

Ukrainian Foreign Ministry spokesman Oleh Nikolenko denied that Kyiv had made such commitments.

"Ukraine did not use and did not plan to use the grain corridor for military purposes. The Ukrainian side clearly adheres to the provisions of the grain agreement," Nikolenko wrote on Facebook. "Our state did not take on any new obligations."

Since the deal was reached in August, 430 ships have exported 10 million tons of Ukrainian agricultural products to countries in Africa, Asia and Europe. The infrastructure ministry said export volumes in October "could have been 30-40% higher if Russia had not artificially blocked inspections in the Bosphorus."

Meanwhile, Kremlin-backed authorities in the Donetsk region and Zelenskyy's office announced another prisoner exchange Thursday, this involving 107 military personnel on each side.