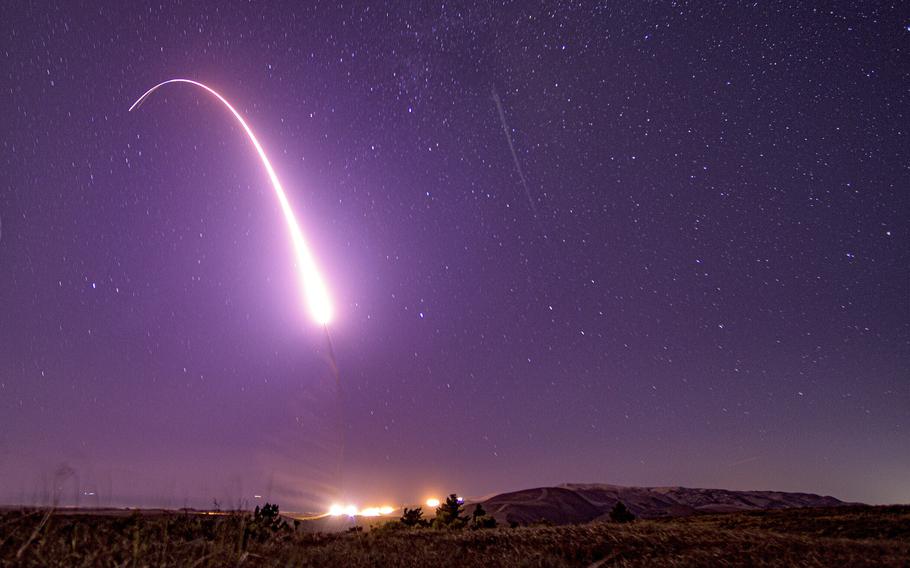 As Russia punctuates its mounting losses in Ukraine with overt threats and private deliberations about the possible use of nuclear weapons and “dirty bombs,” Western leaders are being forced to grapple with whether Moscow is planning a dramatic escalation on the battlefield - a development that would leave the United States and NATO with a limited set of options to respond.

President Biden and his advisers have been closely tracking the Kremlin’s signaling, which Biden has opined is pitching the world closer to “Armageddon” than at any point since the Cuban missile crisis. Cabinet-level officials, too, have been warning publicly that any move by Russia to make good on its threats will be answered “decisively,” with “catastrophic consequences.”

Last month, senior Russian military leaders began discussing the potential use of a tactical nuclear weapon should their forces face considerable new setbacks in Ukraine, according to two people familiar with the U.S. intelligence. Their conversations, first reported by the New York Times, were speculative and did not entail explicit plans to use such weapons or identify possible targets, these people said on the condition of anonymity to discuss information deemed highly sensitive. But the intelligence concerned Washington considerably and was closely followed by the first contact between top U.S. and Russian military officials in several months.

The Pentagon declined to comment on the specific intelligence regarding Russian leaders’ recent conversations.

A White House spokesman, John Kirby, said Wednesday that the administration has no indications that Russian President Vladimir Putin has decided to use a nuclear weapon, but that “we have grown increasingly concerned about the potential as these months have gone on.” The United States, he said, continues to monitor Russia’s nuclear signaling “as best we can.”

Administration officials have demurred when asked to specify what that response might look like, citing the need for strategic ambiguity - and the value of keeping their options open. They have been plenty specific, they say, with Russia via private channels, including direct engagements between Cabinet-level officials and their counterparts in Moscow that have been increasing in frequency as the Kremlin’s rhetoric grows more threatening. They also stress that the United States has a vast array of response options from which to choose.

Yet the administration’s hands may be more tied than its representatives would like to admit.

Sanctions would be an obvious means of punishment - but some experts worry that punitive economic moves alone will not be sufficient to bring Putin to heel.

“Sanctions don’t have a proven track record of serving as a successful deterrent,” said Eddie Fishman, a former State Department employee who worked on the Russian sanctions portfolio during the Obama administration and now teaches at Columbia University. “Unfortunately, the ship has sailed on that. . . . The United States has to be prepared to use military force.”

A military response would be a more forceful display of Western repudiation, but a retaliatory attack on Russian interests risks igniting a war between NATO and Russia, something the Biden administration has thus far studiously tried to avoid.

“I do not think the United States would even contemplate a nuclear response. If Putin is bad by blowing up a nuke, then the U.S. is also bad by blowing up a nuke,” said Hans Kristensen, director of the Nuclear Information Project at the Federation of American Scientists. “You break the taboo, and you don’t get anything out of it - the only thing you get out of it is more nuclear escalation.”

That leaves the United States in strategically uncharted territory. For decades, the whole approach to maintaining, updating and growing the U.S. nuclear arsenal has been to deter attacks on the homeland, U.S. allies and other interests. It is far less clear what the playbook is for checking a rival nuclear power that carries out a radioactive attack against a third-party country in a manner that offends morally and upends decades of precedent - but doesn’t necessarily pose a direct, physical threat to U.S. or NATO soil.

“The political context, the intelligence, the intent and our overall context here would matter a lot,” said Thomas Karako, who runs the Missile Defense Project at the Center for Strategic and International Studies. He threw out a few example considerations: “What was the nature of nuclear use, what was the altitude, what were the effects, how many people died?”

The heightened concern over a Russian radioactive attack has centered around two key scenarios: Moscow using a dirty bomb or a “tactical” nuclear weapon against Ukraine.

The dirty bomb speculation is tied to comments made by Russian Defense Minister Sergei Shoigu, and repeated last week by Putin, suggesting Ukraine planned to detonate a device loaded with fissile material on its own territory. U.S. and Western officials believe it is more likely that Russia’s warnings were in fact the opening steps of a false-flag operation, signaling the Kremlin’s intentions to use such a weapon and blame Ukrainians for the fallout, literally.

Those comments added new urgency to worries that Moscow might draw from its copious arsenal of low-yield nuclear weapons to strike a devastating but geographically limited blow against Ukraine. Such a move would not only terrorize the local population, but throw down a gauntlet at the feet of the rest of the globe, which has not seen a nuclear weapon used in combat since the 1945 bombings of Hiroshima and Nagasaki - attacks carried out by the United States, as Putin has made a point of recalling.

“The only country in the world which has used nuclear weapons against a nonnuclear state was the United States of America; they used it twice against Japan,” he reminded attendees of the Valdai Discussion Club last week. “What was the goal? There was no military need for it at all. . . . The U.S. is the only country that has done it because it believed it was in its interests.”

Yet despite the urgency that such potential developments have injected into government planning, Washington has mostly downplayed the idea that Putin will make good on his threats. Military leaders have similarly sought to defuse Biden’s recent declaration that Putin was “not joking” about a potential “Armageddon,” stressing it was far more likely that the Kremlin’s beleaguered strongman was letting off some steam, as Ukrainian fighters push the Russian military into a string of embarrassing retreats.

Biden walked back his own comments days later, saying he didn’t think Putin would actually use nuclear weapons.

In recent days, Putin also has been trying to backpedal. Last week, in his Valdai Discussion Club speech, he insisted that his government had “never said anything proactively about Russia potentially using nuclear weapons; all we did was hint in response to statements made by Western leaders.” Putin also insisted that Russia had “no need” to use either a nuclear weapon or a dirty bomb, arguing, “there is no sense in it for us, neither political nor military.”

But U.S. officials are loath to let their guard down. According to administration officials who spoke on the condition of anonymity to discuss their assessments of the battlefield, Russia is unlikely to be cowed into a complete retreat anytime soon, even as Ukraine’s recent battlefield victories put its forces on the back foot. And as Russia exhausts its troops and its conventional arsenal, the danger is rising of Moscow turning to more-insidious tactics and weapons to beat back Ukraine’s counteroffensives.

“The practical effect of their depletion of their conventional forces is unfortunately an even greater reliance on their nuclear forces,” a senior defense official told reporters last week, speaking on the condition of anonymity to discuss U.S. nuclear strategy.

Against that backdrop, U.S. officials have been acutely resistant to signaling any sort of limits on using the U.S. nuclear arsenal - the only one in the world of a size that can rival Russia’s - to constrain Putin’s intentions. They continued to stay mum even after French President Emmanuel Macron stated last month that France would not meet a Russian nuclear strike on Ukraine with a nuclear strike on Russia - a position he later defended under fire, stating, “we do not want a World War.”

Military analysts believe that in a head-to-head matchup of conventional forces, NATO far and away has the advantage.

“That’s why he’s been making these nuclear threats all along anyway; he’s been trying to deter NATO from getting involved conventionally,” said Heather Williams, director of the Project on Nuclear Issues at the Center for Strategic and International Studies.

Yet officials and experts increasingly think that what may bring Putin back from the brink of radioactive warfare is the threat not of mutually assured destruction from the West, but of losing his last remaining allies.

Russia has managed to keep its war machine and domestic economy afloat despite an array of punishing Western sanctions, thanks to oil and gas sales. Over the eight months since the Ukraine invasion, Russia has pumped fossil fuels not only into the energy grids of Europe, but the massive markets of China and India as well.

Beijing and New Delhi, which are both nuclear powers, have remained largely neutral on Russia’s invasion of Ukraine, repeatedly abstaining from key United Nations votes condemning Moscow’s war and recent annexation of Ukrainian territory. They have thus far declined to embrace Western efforts to establish price caps on Russian oil that might limit energy profits flowing back to Moscow.

But experts doubt China and India would stand by Moscow should it employ a nuclear weapon.

“For Putin, any nuclear use is a huge risk, because he can’t know for certain, one way or another, how New Delhi and Beijing will respond to it,” Williams said, stressing that the Asian economic powerhouses might distance themselves from Russia if Putin crosses a line.

If Russia’s last remaining friends were to demonstrate their disdain over use of a radioactive weapon, it could pull the rug out from under Moscow’s entire war effort.

“Using nuclear weapons, it might win the battle,” Williams said, “but not the war.”