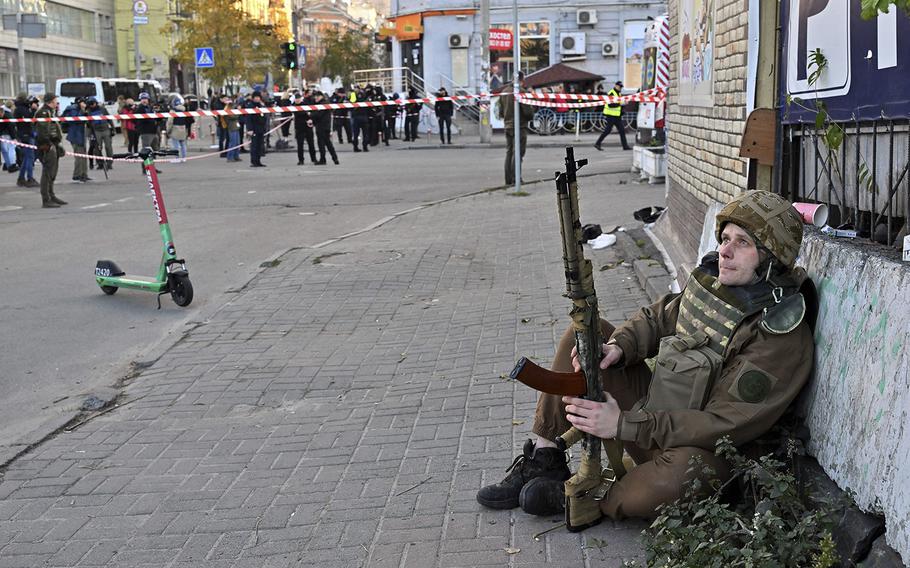 A Ukrainian serviceman watches the sky during a drone attack in Kyiv on Oct. 17, 2022, amid the Russian invasion of Ukraine. (SERGEI SUPINSKY/AFP via Getty Images/TNS)

(Tribune News Service) — Russian President Vladimir Putin's swift and severe response to an attack on his Black Sea fleet reflects a war that is increasingly marked by a duel between long-range Russian missiles and Ukraine's innovative array of drones and truck bombs.

Putin on Monday made clear why he was suspending Russia's involvement in a deal that for three months had allowed much-needed Ukrainian grain to be shipped to global markets: He wants to secure the Russian Navy's ships after an attack by air and sea drones.

On Wednesday, Russia's defense ministry said Moscow was rejoining the grain agreement, after receiving assurances from Ukraine that the safe passage corridor it established won't be used for attacks. The episode speaks volumes about the dual nature of a war that's now being fought as intensely behind the front lines as on them.

The Crimea-based Black Sea Fleet may no longer pose the threat of imminent amphibious assault it did at the outset of Putin's invasion, but according to the US and Ukraine it's been launching Kalibr cruise missiles that form part of the missile barrages Russia has been unleashing on Ukrainian cities for weeks.

And while Ukrainian President Volodymyr Zelenskyy's forces have no direct equivalents in their arsenal to fire back with, they're finding other ways to respond.

The long-range war that the Black Sea Fleet forms part of is only likely to become more important in the coming months, as fighting on the ground is slowed by autumn rain and falling winter temperatures, adding to exhaustion on both armies in a high intensity conflict that's been underway since February.

It is a "war of drones," Ukraine's Deputy Prime Minister for Digital Transformation Mykhailo Fedorov told Forbes Ukraine in an interview published Monday, adding his country was on the cusp of a boom in their manufacture, including a model specifically designed to shoot down the Shahed-136 loitering drones the U.S. says Russia bought from Iran. "Those who can now scale the management and production of strike drones on an industrial level will win," Fedorov said.

Russia denies its Geran-2 drones are re-labeled Shaheds bought from Iran. On Tuesday, U.S. National Security Council spokesman John Kirby said the U.S. was concerned "Iran might be considering the provision of surface-to-surface missiles to Russia in addition to the drones."

Putin's own production lines are hampered by sanctions on key components such as silicon chips.

In the meantime, Ukraine appears to be using whatever means it can find to strike behind Russian lines. On Tuesday, the intelligence arm of Ukraine's defense ministry celebrated the destruction of two night-attack helicopters, and damage to two others, by hand-set explosives at Russia's Pskov air base. Pskov is more than 700 km (435 miles) from the Ukrainian border.

Ukraine has not claimed responsibility for Saturday's use of unmanned boats against the Russian fleet. But it described as "the beginning" an Oct. 8 truck bomb attack that disabled a key bridge linking the Russian mainland to Crimea, which Putin annexed in 2014. The bridge is about 250 miles from the nearest Ukrainian controlled territory. Ukraine has also struck numerous behind-the-lines targets within the 50 miles reach of US HIMARS rockets.

Answering questions after a meeting with the leaders of Armenia and Azerbaijan at Russia's Black Sea resort of Sochi, Putin first reiterated his claim that as little as 3% to 5% of grain released through the July 22 grain deal's secure corridor was going to the poor countries that were supposed to get it.

The correct figure is 20%, according to the United Nations, which also says the goal with the agreement was to reduce soaring global grain prices, rather than to send specifically Ukrainian grain to poor countries.

"But that isn't the point," Putin continued. The point, he said, was that Ukraine had attacked the Black Sea Fleet with 20-foot-long boat drones that packed with explosives. "This is not a joke."

The attack failed, according to Putin, but it put at risk both Russian and international shipping. To lift the suspension on the grain deal, he said he wanted the U.N. – which brokered the agreement – to get Ukraine to guarantee the security of the agreement's corridor. That assurance now appears to have been given and could give the fleet at Sevastopol a measure of protection to continue launching Kalibr missiles across Ukraine.

The war's different theaters – front line, long range and economic – are tightly interwoven. Taken together, they suggest Putin still has an ambitious strategy to control Ukraine, rather than one based around any sudden nuclear escalation to stop or settle the war, according to the Institute for the Study of War, a U.S. think tank that closely follows the conflict.

The same hold-territory-and-wait strategy is consistent with withdrawals to new defensive lines in Ukraine's southern Kherson province. It's in line, too, with the recent campaign of missile strikes on energy infrastructure aimed at eroding public morale, creating a renewed refugee crisis in Europe, and hindering Ukraine's war effort.

It isn't clear that any of those goals are yet being achieved, but temperatures will fall further. The nation's electricity utility said Wednesday it would order more power outages to maintain the grid in northern and central Ukraine. Zelenskyy, in an overnight statement, said he asked the EU for help in restoring the country's energy infrastructure, 40% of which has been damaged.

Ukraine's General Staff said on Facebook that Russia launched another seven missile and 47 air attacks over the previous day.

Despite optimism in Ukraine that Russian forces can be pushed back to the east bank of the Dnipro river at Kherson by the end of the year, "it looks very much like a hard fight," Michael Kofman, a specialist in Russia's military at the CNA security think tank in Washington, said in a recent podcast.

Kofman, who just returned from a field trip to Ukraine, said Russian forces were digging multiple lines of defense around Kherson in a way they had failed to do in the north east, the scene of September's rapid Ukrainian counteroffensive.

"Putin still thinks he can win time while support for Ukraine withers, and he's getting some positive signals" from the U.S., where both progressive Democrats and Trump Republicans recently expressed reservations about the scale of military and financial aid to the country, said Mykola Bielieskov, a research fellow at the National Institute for Strategic Studies, a government think tank in Kyiv.

Bielieskov said there probably will be a few weeks for Ukraine to claw back territory and inflict Russian losses before winter sets in. The slowdown that follows is likely to be less the result of inclement weather, he said, than of the need for both sides to rest and rebuild after more than eight months in the field.

In the meantime, the long range battle is only likely to accelerate as both sides ramp up production and purchases of attack drones and missiles. Putin's threats of nuclear Armageddon have been over-played, according to Bielieskov, and should be seen as part of a successful strategy to deter the U.S. from supplying Ukraine with the 300 km (190 mile) Army Tactical Missile Systems it needs to level the long range playing field.