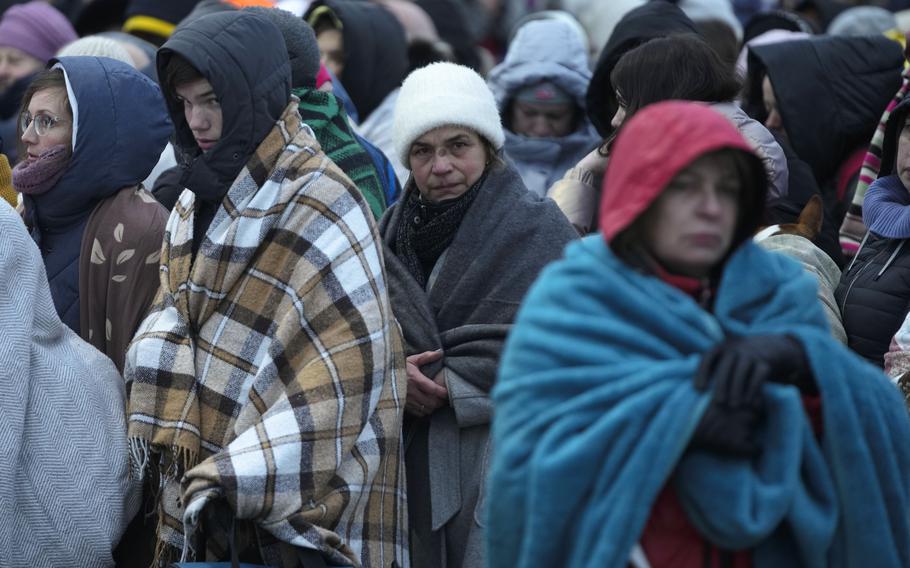 Refugees, mostly women and children, wait in a crowd for transportation after fleeing from the Ukraine and arriving at the border crossing in Medyka, Poland, on March 7, 2022. (Markus Schreiber/AP)

UNITED NATIONS — Russia's invasion of Ukraine has driven some 14 million Ukrainians from their homes in "the fastest, largest displacement witnessed in decades," sparking an increase in the number of refugees and displaced people worldwide to more than 103 million, the U.N. refugee chief said Wednesday.

Filippo Grandi, who heads the U.N. High Commissioner for Refugees, told the U.N. Security Council that Ukrainians are about to face "one of the world's harshest winters in extremely difficult circumstances," including the continuing destruction of civilian infrastructure that is "quickly making the humanitarian response look like a drop in the ocean of needs."

Humanitarian organizations have "dramatically scaled up their response," he said, "but much more must be done, starting with an end to this senseless war."

But given "the likely protracted nature of the military situation," Grandi said his agency is preparing for further population movements both inside and outside Ukraine.

In his wide-ranging briefing, Grandi told members of the U.N.'s most powerful body that while Ukraine continues to grab headlines, his agency has responded to 37 emergencies around the world in the last 12 months arising from conflicts.

"Yet, the other crises are failing to capture the same international attention, outrage, resources, action," he said. 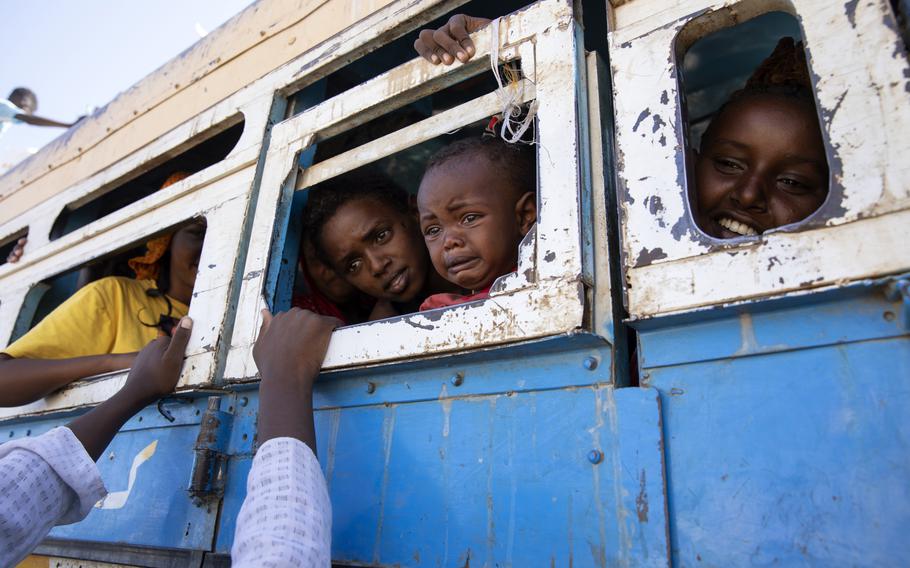 Refugees who fled the conflict in Ethiopia’s Tigray region ride a bus going to the Village 8 temporary shelter, near the Sudan-Ethiopia border, in Hamdayet, eastern Sudan on Dec. 1, 2020. (Nariman El-Mofty/AP)

Grandi pointed to the more than 850,000 Ethiopians displaced in the first half of the year, and said the recent surge in conflict in that nation's northern Tigray region has had "an even more devastating impact on civilians."

The U.N. refugee agency is also in Myanmar, where the country's military rulers are facing armed resistance and an estimated 500,000 people were displaced in the first half of the year, Grandi said.

Humanitarian access remains "a huge challenge," he said, adding that a return home remains distant for the almost 1 million Rohingya Muslim refugees who fled from Myanmar to neighboring Bangladesh.

In Congo, brutal attacks including sexual violence against women have added more than 200,000 people to the 5.5 million already displaced in the country, Grandi said.

He lamented that "the horrors" he witnessed when he worked in Congo 25 years ago are repeating themselves, "with displacement being, once again, both a consequence of conflict and a complicating factor in the web of local and international tensions."

Addressing a council responsible for ensuring international peace and security, Grandi said: "Surely we can do better in trying to bring peace to this beleaguered region."

The refugee chief said these crises and others, including the longstanding issue of refugees from Afghanistan and Syria and the complex flow of migrants from the Americas, "are not only fading from media attention but are being failed by global inaction."

He urged greater attention and much greater financing for preventing and adapting to the warming planet, warning that otherwise tensions and competition will grow "and spark wider conflict with deadly consequences, including displacement.

"And what is a starker example of `loss and damage' than being displaced and dispossessed from one's home?" he asked.

Last week, Grandi said he met emaciated Somalis who had walked for days to get help and whose children had died on the way, and Somali refugees "pushed into already drought-affected areas of Kenya."

He praised the Kenyan government, despite its own challenges, for " making a landmark shift from encampment of refugees to inclusion — a transition that I hope all will robustly support."

Grandi expressed hope that this month's U.N. summit on climate change in Egypt and the summit in the United Arab Emirates next year will take into account both climate's link to conflict and the displacement it causes.

But Grandi said this is not enough. He said the U.N. refugee agency needs $700 million by the end of the year to avoid severe cuts in its services.

He further called for strengthened peacebuilding to prevent the recurrence of conflict, including by reinforcing the police, judiciary and local government in fragile countries. He said that security also must be improved for humanitarian workers who are under increasing threat and that the Security Council needs to overcome its divisions on humanitarian issues.

"Because what I saw in Somalia last week was a condemnation of us all," Grandi said.

He pointed to "a world of inequality where extraordinary levels of suffering are getting scandalously low levels of attention and resources," adding that those who contribute the least to global challenges such as climate change "are suffering most from their consequences."