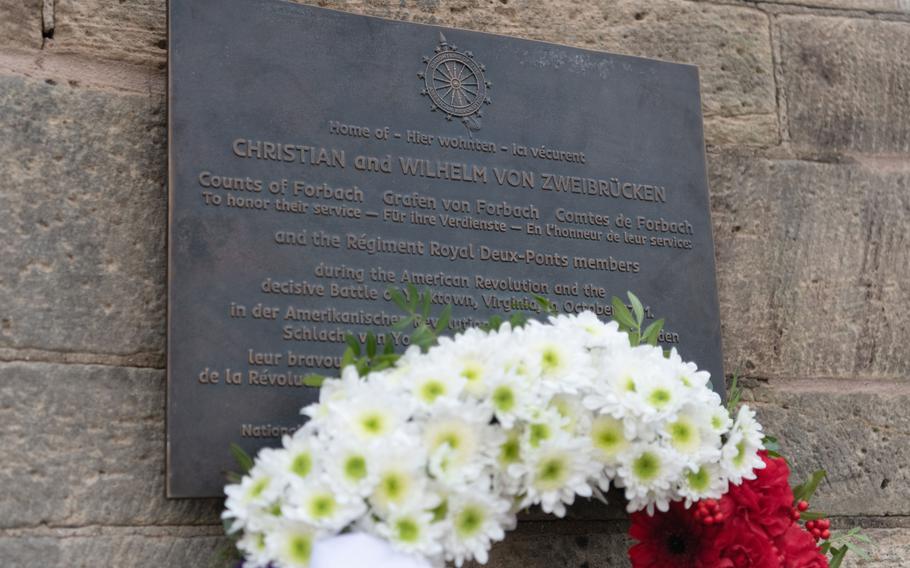 Descendants of those who fought in the war joined local officials Saturday to honor the regiment and the two brothers who led it by unveiling a plaque in their hometown of Zweibrucken, near Germany’s western border with France.

“We are very proud as the city of Zweibrucken that we are part of the history of the U.S.A.,” the city’s mayor Marlod Wosnitza told roughly three dozen people who attended the unveiling. “We have a long-standing partnership with this country.”

The plaque — bestowed by the Daughters of the American Revolution, a lineage-based group whose members descend from people who supported the United States’ independence efforts over two centuries ago — is located on the site of Christian and Wilhelm von Zweibrucken’s former family home near the city’s center.

Christian lead the regiment, known by its French name Regiment Royal Deux-Ponts, that his father Christian IV, the Duke of Zweibrucken, assembled. It included members from the Palatinate and Saarland regions of Germany and eastern parts of France. Wilhelm served as the colonel-en-second.

Roughly a year after arriving in North America, the regiment took part in the Battle of Yorktown, which proved to be the decisive engagement of the Revolution, forcing British troops to surrender and paving the way for the Treaty of Paris in 1783. Shirley Herzer, a member of the Daughters of the American Revolution Palatinate Chapter, delivers a prayer at a ceremony in Zweibrucken, Germany, Saturday, Oct. 29, 2022, during which a plaque was unveiled to honor the local Regiment Royal Deux-Ponts that supported American colonists at the Battle of Yorktown. (Phillip Walter Wellman/Stars and Stripes) 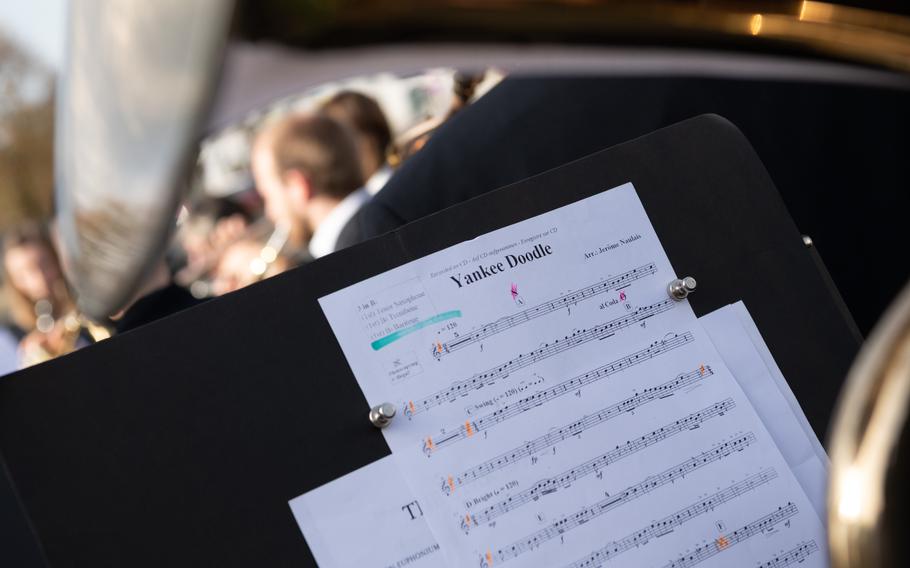 The Zweibrucken City Band performs Yankee Doodle during a ceremony organized by the Daughters of the American Revolution in Zweibrucken, Germany, Saturday, Oct. 29, 2022. (Phillip Walter Wellman/Stars and) A model of the Regiment Royal Deux-Ponts, which supported colonists during the American revolution, is displayed at the Zweibrucken City Museum on Saturday, Oct. 29, 2022. (Phillip Walter Wellman/Stars and Stripes) A painting by Johann Christian von Mannlich, displayed at the Zweibrucken City Museum on Saturday, Oct. 29, 2022, depicts Christian von Zweibrucken, left, and his younger brother Wilhelm. Both would later support American colonists at the Battle of Yorktown. (Phillip Walter Wellman/Stars and Stripes )

The Palatinate chapter of the DAR in Germany paid for the plaque and worked with local authorities and DAR officials in the U.S. for over two years to get it approved. Some members of the chapter live in the nearby Kaiserslautern Military Community, the largest U.S. military community overseas, and attended Saturday’s event. American flags were given to attendees and a local band played songs, including The Star-Spangled Banner and Yankee Doodle. About two dozen other members living in Germany and France also attended.

“This is a specific part of our common history: French, German and American,” Catherine Armand, the regent of DAR’s Rochambeau chapter in France, who traveled to the event from Paris, told Stars and Stripes.

“Being in this country with these women who still remember their heritage, it’s all really important,” Kammeyer-Price said, adding that the new plaque should help others remember this piece of American, German and French history.

“It really made a difference for us, the fact that these two brothers came to the United States and were part of this decisive battle,” Kammeyer-Price said. “To honor them like this is really wonderful.”

Mayor Wosnitza pointed out parallels between the regiment’s 18th century efforts and the support the U.S. and Germany are providing Ukraine today, as it fights to repel invading Russian forces.

“Ukraine is in a war fighting for their independence,” Wosnitza told the crowd. “[The] country has to be defended by their people and by us all.”

The unveiling of the plaque, which has English, German and French wording, corresponds with an exhibition in German on Duke Christian IV at the Zweibrucken City Museum that runs until March and includes information about the Regiment Royal Deux-Ponts. Museum officials are encouraging Americans to visit.