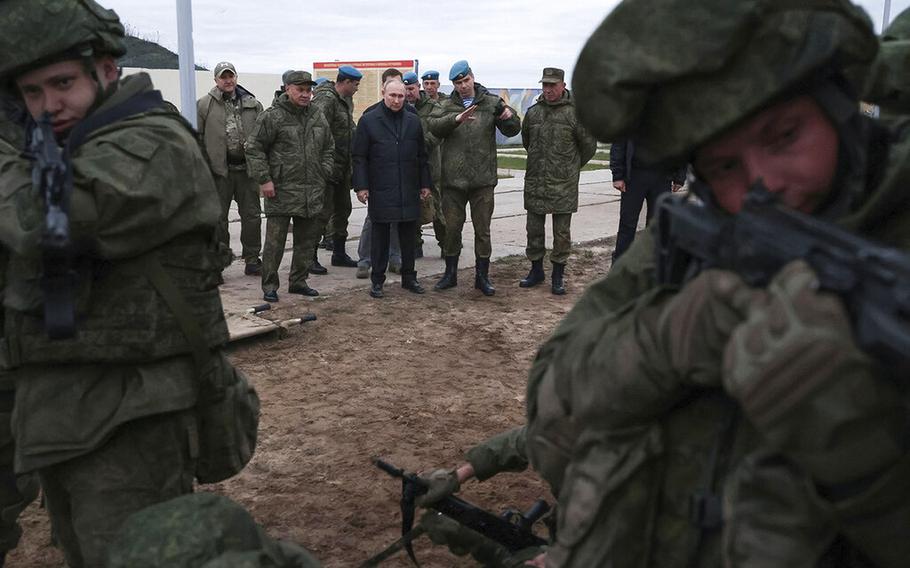 Ehson Aminzoda seemed to be following the path of many Central Asian immigrants in Russia - initially working as a bricklayer after arriving in Moscow earlier this year, then at a local restaurant, saving his modest earnings in hope of returning to his native Tajikistan to marry. On Oct. 10, he headed out to meet friends, and was seen leaving the Lyublino subway station in southeast Moscow. Then, he disappeared.

Five days later, according to Russian authorities, Aminzoda, 24, was in Belgorod, just 24 miles from the Ukrainian border, where he and another man, Mehrob Rakhmonov, 23, allegedly opened fire at a military training base, killing nine and injuring 15 others. The alleged shooters were also killed.

The Russian defense ministry said the shooting took place during a training session for a group of volunteers "who wished to participate in the military operation in Ukraine." Russian authorities quickly branded the incident a terrorist attack, deliberately highlighting the nationality of the alleged gunmen, who were Tajik.

Officially, little else has been disclosed about the shooting, which has been overshadowed by the ongoing death and destruction of Russia's war in Ukraine.

But rights activists and relatives of the alleged gunmen believe they were forcibly conscripted. They said the mere presence of the two Tajik men at the base in Belgorod points to pervasive abuses against migrant workers in Russia and to long-simmering ethnic tensions, which have worsened as a result of Russian President Vladimir Putin's chaotic and much-criticized military mobilization.

While many men of fighting age have fled Russia to avoid being sent to fight in Ukraine - creating a new, reverse migration of Russians to Central Asian countries, including Tajikistan - some migrants in Russia have been swept into the ranks of the Russian military despite having no obligation to serve.

Some appear to have volunteered to fight, potentially induced to enlist by a new law offering a "fast track" to Russian citizenship for foreigners who sign a one-year military contract.

In other cases, advocates say, men seeking help from Russia's Federal Migration Service were tricked into signing military papers, while still other migrants have been caught up in the botched mobilization drive and illegally issued draft orders despite not being Russian citizens.

It is unclear how Aminzoda ended up in Belgorod, which is a major staging ground for the war in Ukraine. Relatives said they have no idea.

"How he ended up in Belgorod, we do not know," Firuz Aminzoda, a brother of the alleged gunman told Radio Ozodi, RFE/RL's Tajik service. "My brother was not a terrorist, and he did not have such thoughts. He [was] an ordinary immigrant who wanted to work and build his life." He emphasized that Ehson Aminzoda was not a Russian citizen and therefore not eligible to be mobilized.

The alleged Belgorod shooters disappeared around the same time that authorities in Moscow began raiding offices and hostels, and grabbing men off the streets in what appeared to be a mad push to reach the mobilization's targets. (On Friday, defense minister Sergei Shoigu declared it completed).

Shortly before Putin issued his mobilization decree on Sept. 21, the Russian military opened a recruitment office at Moscow's main migrant service center. Since the opening of that center, lawyers and activists say they have been inundated with pleas for help from migrants who say they have been detained, coerced or tricked into signing up for the army.

Videos on social media from Ukraine also appear to show Russian prisoners of war who claim they are workers from Central Asia and were sent to fight because they did not have their documents in order.

Valentina Chupik, the director of Tong Jahoni, a nonprofit organization that helps Central Asian migrants in Russia, said she has received at least 70 requests for assistance from migrants, some saying they were beaten and tortured.

According to Chupik, who is based Yerevan, Armenia, after being deported from Russia, one man from Kazakhstan was bundled into a van, where police beat him, electroshocked his genitals, and forced him to sign a draft order.

The Washington Post could not independently verify Chupik's account. The alleged victim has fled back to Kazakhstan and could not be reached.

But other migrants from Central Asia living in Russia said in interviews that they were detained by the police and pressured to enlist. They spoke on the condition of anonymity because of security risks.

A 35-year-old food deliveryman from Uzbekistan who has lived in Russia for 15 years, said that when he went to the migrant center officials marked his passport, fingerprinted him, and without explanation announced that he had just signed a contract to serve.

The man said he refused and left the center. He was then apprehended by the police who tried to intimidate him into signing the documents. He was released and is now trying to leave Russia.

"When I first heard the words of 'mobilization,' I didn't feel anything, because my situation is far worse than any mobilization drive in Russia," the man said. "Here, the attitude toward migrants is very harsh."

He added: "I would never fight on a foreign land and for the sake of foreign people."

A second man, a 36-year-old dual Russian-Tajik citizen who works as an electrician and gives legal advice to other migrants in Moscow, said that he was detained during a raid by the police at the construction site where he works, on account of his ethnic Caucasian appearance. The man said he was brought to a police wagon where officers threatened to beat him and forced him to sign the summons.

"I'm not going to serve, I am against it," he said, adding that he was trying to leave Russia as soon as possible. "Why take someone else's land for yourself in the first place?"

"But if they catch me again, I will have to serve," he said. "It's either that or years in prison."

Lawyers said that the Russian authorities are using several methods to pressure migrant workers to enlist including falsifying criminal cases against them, promising money, and threatening deportation.

Karimjon Yorov, a Moscow-based lawyer and human rights activist helping Tajik migrants, said that some migrants had signed up voluntarily, drawn by the promise of money or citizenship but that others have had their residency permits canceled if they refused to enlist.

Chupik called the heavy-handed methods "a bunch of crimes rolled into one."

"Firstly, it is mercenarism, which is prohibited by Russian law," Chupik said. "Secondly, when a person is forced into military service, this is already, of course, a crime, and this is coercion to commit the crime of mercenarism. Thirdly, violent crimes have reportedly been committed including the abuse of authority and torture."

Chupik said that forcing migrants to fight in a war was just the latest example of cruelty and injustice that they face living in Russia, where they are always in an "extreme position of oppression."

"Naturally, in a war, they are the first victims, because they are defenseless," Chupik said. "Who will come out for them at a rally? Who will defend them? To whom can they complain so that their voice is heard?"

Military analysts say that a disproportionate number of Russian fighters in the war in Ukraine are ethnic minorities from regions outside the main cities of Moscow and St. Petersburg, including Buryatia in Siberia, and Chechnya and Dagestan in the North Caucasus. These regions have suffered heavy casualties.

Putin had long resisted declaring a mobilization in part to avoid the war being felt by middle class Russians from Moscow and St. Petersburg who are more likely to criticize and resist. Following September's decree, however, protests broke out in Dagestan and Yakutia, and governors in several regions acknowledged that many men were mobilized by mistake.

A recent report from the Institute of the Study of War, a U.S.-based research group, found that the shooting in Belgorod was likely a consequence of the Kremlin's "continual reliance" on ethnic minority communities to bear the burden of mobilization.

"Ethnic minorities that have been targeted and forced into fighting a war defined by Russian imperial goals and shaped by Russian Orthodox nationalism will likely continue to feel alienation, which will create feedback loops of discontent leading to resistance followed by crackdowns on minority enclaves," the report stated. "The Belgorod shooting is likely a manifestation of exactly such domestic ramifications."

Details about the shooting remain scarce. Russian media and war-focused Telegram channels have reported that it may have been set off by a dispute between volunteer fighters who were being trained at a shooting range and a senior officer who made disparaging remarks about Allah.

"I think that we will not know the truth about the shooting or shooters for a while, if ever, as this is not in the interests of the military or the state" said Yorov, the lawyer and rights activist. "But the Russian authorities will surely make life even harder for migrants in Russia, especially Muslims."