They escaped Russian occupation. Now they want to go back. 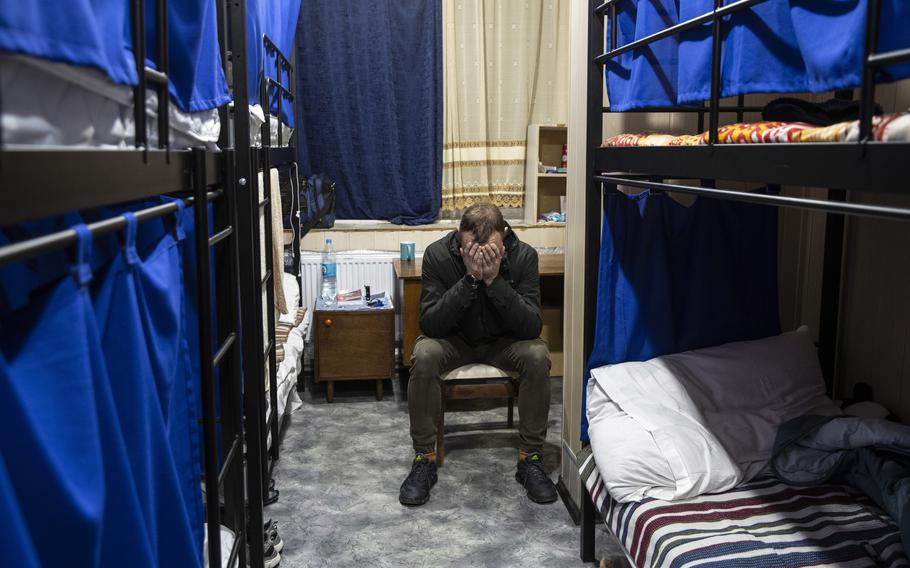 Anton, 26, fears for the safety of his pregnant wife, who returned to Russian-occupied Kherson. He sits by his bed at a shelter for internally displaced Ukrainians in Zaporizhzhia on Oct. 24. (Heidi Levine/The Washington Post)

ZAPORIZHZHIA, Ukraine — When Russian tanks rolled into the southern Ukrainian city of Kherson last spring, the young couple decided it was time to leave.

They fled to Kyiv, where Anton got a job driving a taxi and soon Nastya became pregnant. But she missed her mother, who had been left behind. So, last month, newly married Nastya did the unthinkable: She went back.

Back into Russian-occupied territory. Back into a city teetering on the edge of chaos, where both sides are preparing for what could be one of the fiercest battles in the now eight-month-old war. Back into the maw of a Russian military accused of committing atrocities.

Anton could not follow. And it was the Ukrainian side that blocked him.

"They won't explain why," he said Monday in a camp for internally displaced people in Zaporizhzhia, 200 miles from Kherson. "They just keep turning me around."

"Sweetheart, I'm worried," he texted. "Write me call me immediately when you get this."

He received only silence.

Almost 15 million Ukrainians — a third of the population — have been forced from their homes since Russia invaded in February, according to the United Nations, many leaving loved ones behind. Among the displaced are the Kherson residents now desperate to return home despite the danger and uncertainty of life under Russian occupation and the acute risk of being trapped in heavy fighting.

The seemingly crazy decision to go back, by Anton, Nastya and others like them, highlights the impossible choices that war throws at ordinary people, who are caught in a conflicting swirl of allegiances and emotions. Is it better to be safe while friends and relatives remain in harm's way? Or should all be together in the line of fire? Nadia Melmuchuk sits on a cot during a tour of an underground shelter on Oct. 24 after her arrival in Zaporizhzhia with her husband and children from Russian-occupied Kherson. (Heidi Levine/The Washington Post)

In Zaporizhzhia, an industrial city now infamous for the nearby nuclear power plant and for being the capital of a region that Russia claims to have annexed but does not fully control, countless people who fled Kherson or surrounding towns and villages are queuing to return for their relatives.

Their mission is growing more desperate, and also more dangerous, as Ukrainian forces prepare an expected assault to retake Kherson, the first key city seized by Russia after the start of the invasion on Feb. 24. Ukrainian troops have been advancing on the city from the north and west, and the Russians have been in retreat, and consolidating positions on the east bank of the Dnieper River, which splits the city.

Last week, Ukrainian President Volodymyr Zelensky said "Russian terrorists" were planning to blow up the dam at the nearby Kakhovka Hydroelectric Power Plant to flood Kherson and the surrounding area. Russia claims that Ukraine is planning to sabotage the dam, and over the weekend, occupation officials announced they were relocating as many as 60,000 people — roughly one-fifth of Kherson's prewar population.

For months, people fleeing Kherson and nearby towns have arrived in Zaporizhzhia, often after harrowing, multiday journeys through dozens of checkpoints and across contested territory. They are welcomed at a converted big box store and then housed at a former hotel complex. Theoretically, they are supposed to stay for a few days before moving on. Some, however, remain for weeks — not because they can't find other accommodation but because they are waiting for permission to go back.

Konstantyn Buhlyai, a 38-year-old potato farmer from the town of Chaplynka, roughly a two-hour drive from Kherson city, had just marked a month in Zaporizhzhia. Buhlyai had previously sent his wife and two children to live in Utah via a religious group his wife found online. But as a man of military age, he cannot leave Ukraine. Nor can he return to his town to retrieve his parents. 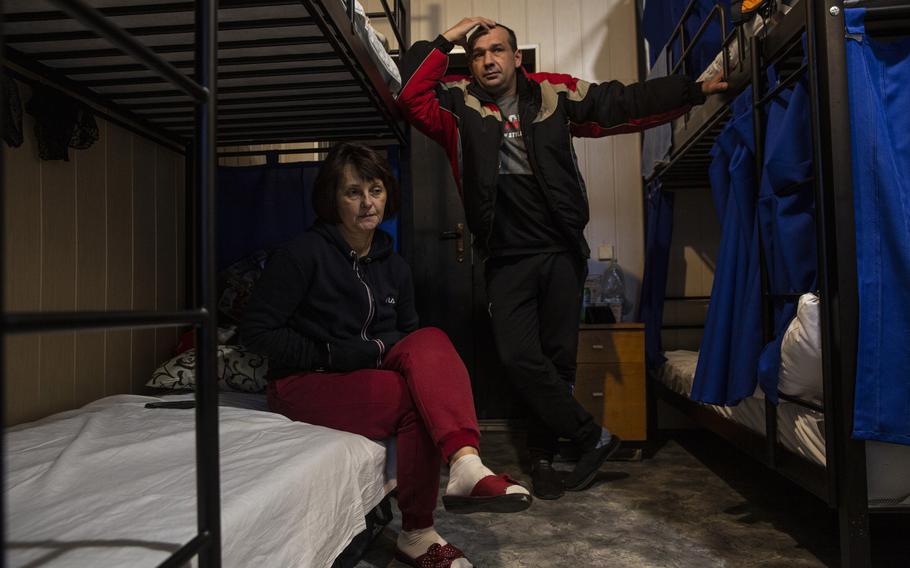 Ihor Samoylychenko, 45, also has spent the past month waiting to return, in his case to Kherson city, where a neighbor had been taking care of his two children, ages 8 and 10. He has put his name into an electronic queue for permission to return but has no clue how long it will take.

Samoylychenko, a truck driver, had used his 4.5-ton vehicle to take three families out of Kherson before returning with humanitarian aid. But when he tried to ferry a second batch of families, he was stopped in Zaporizhzhia. Regional Ukrainian officials would not let him return to Russian-occupied territory.

Samoylychenko wrote a letter to the Zaporizhzhia governor and to a local official at the crossing point, asking to be allowed to go home to his children and ailing mother. But the local official denied his request, citing martial law that restricts the movement of civilians.

Regional officials blamed the travel restrictions on the National Guard, which did not respond to a request for comment. It was unclear whether the restrictions were in place to prevent people's willingly or unwittingly providing the Russian authorities with information, or a result of safety concerns, or were merely a feature of wartime bureaucracy.

As the fighting around Kherson intensified, Samoylychenko has grown more desperate.

"Zaporizhzhia says we can't go because they fear for our lives," he said as he leaned against his bunk in the converted hotel complex. "But I'll sign anything, I'll waive any risk; just let me go back."

On the bed across from him, another angry parent stirred uneasily.

Svetlana Yeremenko said she had arrived in Zaporizhzhia more than a month earlier after a 24-hour trip from her occupied town of Velyka Lepetykha, across the front line, so that her older son, 22-year-old Ivan, could have an operation. But she had left behind her elderly mother, husband and younger son, age 12.

"We can't get permission to go back," Yeremenko said. "They say there is a waiting line, but it's so long it never gets to us."

It was a bitter irony, the two parents said, that it wasn't the Russians but fellow Ukrainians who were keeping them from their families. They said they had no sympathy for the Russian occupiers, or illusions about what awaited them if they were allowed back. Living under Russian control, they said, they had felt like second-class citizens in their own homes. People who refused to work under Russian occupation were fired, and those who agreed to take Russian passports were given cushy jobs and lump sum payments, they said.

"What they are trying to implement is that you're either with us or you're not," Samoylychenko said. "If you're with Ukraine, then it's, 'Dosvidaniya.' "

The road back is also dangerous. Last month, a convoy of cars waiting to return to Russian-occupied territory was hit by a suspected Russian missile, killing more than two dozen people and injuring scores.

Yet, life in Zaporizhzhia has its own risks. There have been explosions near the welcome center. Consequently, internally displaced people are no longer allowed to gather there, volunteers said. And just a week ago, a suspected Iranian drone was shot down above the hotel serving as a shelter. The explosion shattered some windows, and glass still littered the parking lot outside. "We are kind of safe here, but our families back home are not," Samoylychenko said. "We're living on the edge."

Without word from his pregnant wife, Anton was at risk of going over that edge. The couple had met about a year earlier at their job building small airplanes. Nastya worked on designing the planes, and Anton built them. They began flirting, then dating, and on New Year's Day this year, he proposed.

"What, are you an idiot?" she said before hugging him and saying yes. Russia invaded less than two months later, sweeping into southern Ukraine from occupied Crimea. Within a few days, the Russians had taken Kherson.

Anton and Nastya fled to the capital, where they found an apartment and he found a job. Soon, they learned she was pregnant.

But Nastya worried about her mother, and wanted to get her out of Kherson. "She was saying, 'I want to go home, I want to go home,' " Anton recalled. He thought it was such a bad idea that he took her to Bucha, Irpin and Hostomel: suburbs near Kyiv where Russian soldiers were accused of committing atrocities.

"I showed her the mass graves," he said. "And I told her it could be repeated."

Nastya was undeterred. So last month, the couple traveled to Zaporizhzhia by train. But they could not go home together; Anton was told he could not accompany her. When he said goodbye, he thought he would quickly win permission and rejoin his pregnant wife. But now it has now been almost a month, and he is living and volunteering at the hotel turned shelter: 200 miles from his wife and soon-to-be first child.

On Saturday, she sent him a photo of her baby belly.

And then the photos stopped.

Anton called her once, twice, nine times, but there was only silence.

"My sunshine I love you endlessly," he texted. "Please you and mom be careful, when you read my message please call me immediately and write."

He tried not to think of all the things that could have happened. And then, on Sunday, a text.

"Everything okay???" he replied. "I was worried. Almost didn't sleep."

As with many in Kherson, her internet service had been cut. Anton scrambled to find a way to call her, but neither cellphones nor Facebook nor other apps worked. Finally, he remembered using Skype years ago and gave it a try. Suddenly, her phone began to ring and Anton could feel his heart leap.

Nastya's reply was the same one as 10 months earlier, before the war and their separation and the baby he prayed he would one day get to see.

"What, are you an idiot?" she said, and burst into tears.