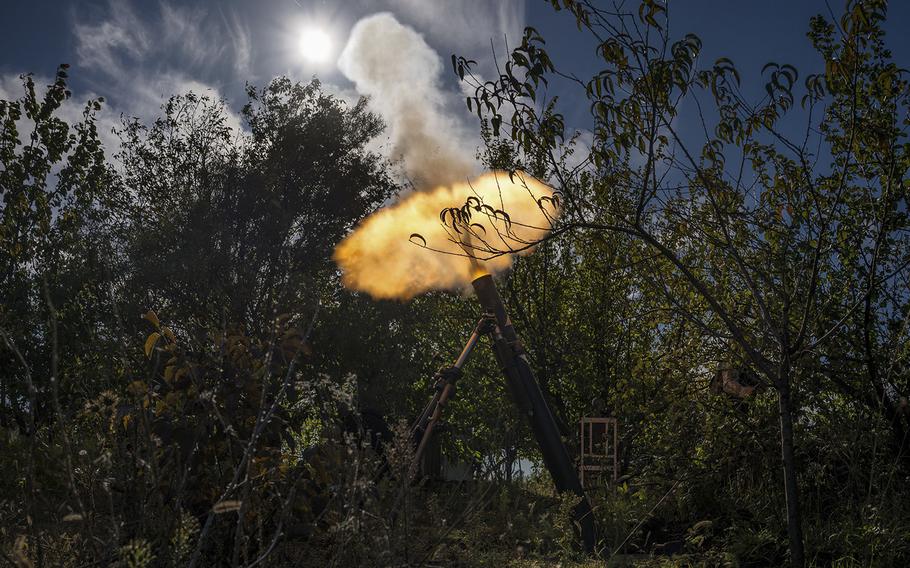 Ukrainian forces fire mortars at a position near Bakhmut, Ukraine, on Oct. 16, 2022. (Wojciech Grzedzinski for The Washington Post)

BAKHMUT, Ukraine - The crash and roar of artillery rarely stops in this east Ukrainian city. In the cold and broken houses, residents huddle by candlelight and pray that they have safety in numbers. On the battlefield, soldiers on both sides are dying in droves.

While Ukrainian advances have redrawn the battlefield map elsewhere, the front line in Bakhmut, some 10 miles from the border of Donetsk and Luhansk, has barely moved in four months of heavy fighting.

Of all the battles in the east, President Volodymyr Zelensky said last week, the "most difficult" is here. Yet in this fight for control of a shattered city, military experts say the ambitions of a Russian oligarch, Yevgeniy Prigozhin, founder of the Wagner mercenary group, may have eclipsed all strategic logic.

After a disorderly Russian retreat from nearby Izyum, the battle for Bakhmut is no longer part of any coordinated military operation. Instead, Prigozhin is pouring waves of mercenaries from Wagner into battle, appearing to see political advantage in capturing Bakhmut as a military trophy while President Vladimir Putin's regular forces are on the back foot elsewhere.

"To be honest, we have to," said Vlad, who is overseeing the 93rd Brigade's effort to refit drones, antitank mines and other weapons so that they are more effective. "The Russians have the soldiers, the guns, everything. We need to be smart," he said.

The salt-mining city of Bakhmut had a population of 70,000 before Russia's Feb. 24 invasion of Ukraine. Perhaps 15,000 remain, but the streets were almost empty as fighting raged there this week. Weeds smothered the wheat fields. Military vehicles sped down roads gouged by rockets, kicking up clouds of dust as they went.

At the 93rd Brigade's command post, a drone operator peered at the live feed of Russian positions that it was sending back to him. The soldiers worked fast, slipping mortar rounds down the barrel and loosing them up through the sky. Someone had scrawled "director" on the drone operator's chair. Squinting down at the screen of his tablet, he waited a second, then he nodded, and a ripple of delight coursed through the men.

They had hit the target.

But these still felt like some of the unit's worst days, said Dima, their 25-year-old commander. When darkness enveloped their dugout a night earlier, Russian forces fired on them with mortars and cluster munitions. "It's not the first time we've been under fire, but this is different now," Dima said.

After four years in the Ukrainian army, Dima said the battle for Bakhmut was among the "most dangerous" he had witnessed.

The fighting and its echoes hung heavy through the city on Wednesday. The air throbbed with the sound of shelling. When that fell quiet, clanking metal in the wind was the only sound left.

A 51-year-old entrepreneur, Oleksander, had dried blood on his face from a rocket strike that smashed his home the night before. He did not have clean water to wash up. He said he had invited his neighbors, a young couple and their daughter, to stay with him in the apartment, thinking that they would be safer if they stuck together.

The parents were now in intensive care, he said, and their 9-year-old child Liza had been evacuated, alone, to another city.

"I thought our place was safer," he said blankly. "We were just sitting there. We were drinking tea."

In a recent analysis, the Institute for the Study of War, a Washington-based think tank, described Prigozhin's Bakhmut effort as "irrelevant operationally" after Russia's loss of Izyum, 60 miles north.

"The Russian seizure of Bakhmut, which is unlikely to occur considering Russian forces have impaled themselves on tiny surrounding settlements for weeks, would no longer support any larger effort to accomplish the original objectives of this phase of the campaign," the report concluded, "since it would not be supported by an advance from Izyum in the north."

Prigozhin, who is nicknamed Putin's chef because he grew fabulously wealthy off of government catering contracts, has been a loud critic of the regular Russian military's performance in Ukraine. His involvement in the Ukraine war is seen by analysts as part of his effort to curry favor and potentially additional state contracts. There is also speculation among the Russian elite that he is angling for a government post.

Wagner played a key role in the capture of Popasna in May but reportedly took heavy losses. According to pro-Kremlin military bloggers, Prigozhin was awarded the nation's highest honor, a Hero of Russia medal, the following month.

After long denying any link to Wagner, which has sent soldiers-for-hire to Syria, Libya, Mali, Mozambique and the Central African Republic, Prigozhin acknowledged last month that he created the group. In a recent self-published interview he claimed that Wagner was carrying out the assault on Bakhmut alone, and called the situation "difficult."

For the Ukrainians, surrendering Bakhmut would give the Russians a hugely symbolic victory, and undermine the prevailing narrative that Moscow's forces are steadily losing ground and Putin's war is failing. In theory, capturing Bakhmut would put the Russians one step closer to bigger urban centers of Kramatorsk and Slovyansk, but there is little evidence that the Russians could make a push for them now.

Across four locations in the Bakhmut area, Ukrainian soldiers described how Wagner troops at times appear to have been used almost as cannon fodder. "They're treating them like single-use soldiers," said Volodymyr, 24, the commander of a self-propelled artillery unit, as he waited on spotters to call in a new target. Usually it was infantry, he said.

"If we are shelling those positions, they keep pushing the men forward again and again," the second soldier said. "They want to smoke us out, then fire artillery on us."

From the 93rd Brigade's position, drone operators have seen the mercenaries stumble over the bodies of fallen comrades as they advance.

A Russian reporter who filmed Wagner's front-line positions near Bakhmut late last month reported that Prigozhin's son was fighting there, and interviewed him, without identifying him by name.

"Bakhmut is a road to many directions. It's a very important point strategically for the Ukrainian forces and for us," another fighter said in the video. "Their team is ready to fight until the end, no matter what the losses are."

The scale of the Russian losses are not known, but Ukrainian soldiers interviewed said they estimated them to be significant. "The number is big on their side because they're not treating them like people," said Misha, a 25-year-old soldier from the 93rd Brigade.

Ukraine's casualties are also heavy. Ambulances shuttled back and forth between the Ukrainian firing positions last week, apparently carrying wounded men from the front line.

At a nearby hospital, two soldiers said they had brought four members of their unit to the emergency room after a Russian rocket attack in Bakhmut, and that three were in a critical condition. Their bloodstained jackets were still in the car. In a video taken shortly after the incident, the fourth man was seen howling in pain with his femur snapped at a sickening angle.

The day before, they said, another company had been surrounded by Russian forces, and fired upon. "There weren't even pieces of them left," said one of the soldiers, who spoke on the condition of anonymity because of the sensitivity of describing Ukrainian casualties.

For Bakhmut's residents, there is also little left. Rockets pound the city every day. A civilian doctor tries to patch up the injuries, but the walking wounded often just pull the shrapnel from their bodies on their own.

Standing on the Bakhmutka River's eastern bank this week, Vitalii Kuzmienko, 52, stared up at a damaged bridge, its deck blown away, leaving a huge gap at mid-span. To stop Russian forces from advancing, the Ukrainians had laid antitank mines on one side, but those mines never detonated.

Kuzmienko said his house had been destroyed in the fighting, and so he was living in the wreckage of an outdoor market. His relatives were buried in Bakhmut, he said, and he didn't want to leave them.

With alcohol on his breath, Kuzmienko said he feared that shelling might hit the bridge, and detonate the unexploded mines and then damage nearby civilian homes. He said he drank every day now to numb the fear and to help him sleep.

When four rockets slammed into the riverbank moments later, he barely moved.

The Washington Post's Serhii Korolchuk and Wojciech Grzedzinski contributed to this report.