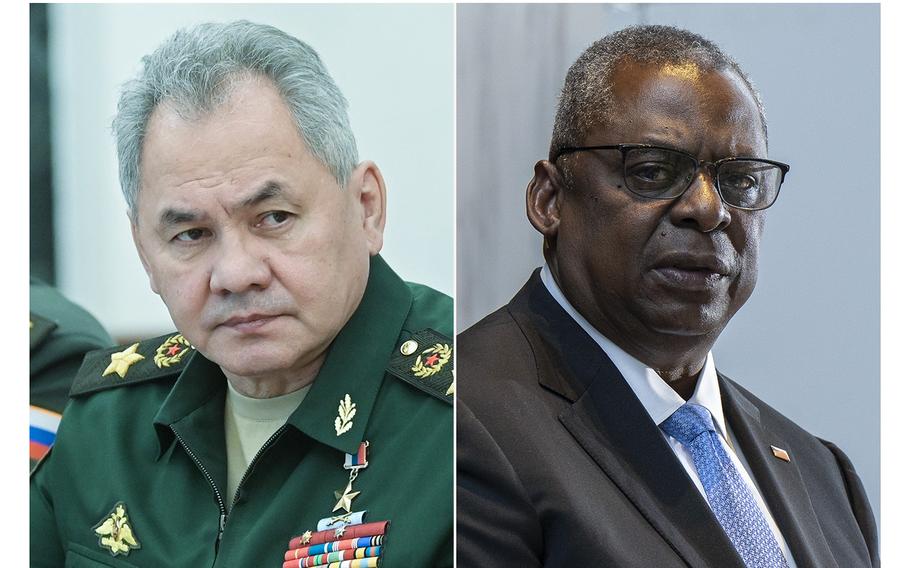 Defense Secretary Lloyd Austin on Friday spoke with his Russian counterpart for the first time since May, as Ukrainian forces seek advances ahead of winter, and Russian drone and missile attacks have terrorized civilians.

Details of the call were closely guarded by both sides. The Pentagon, in a one-sentence summary, said Austin "emphasized" to Russia's defense chief, Sergei Shoigu, "the importance of maintaining lines of communication amid the ongoing war." The Kremlin issued an equally terse recap of the leaders' "telephone negotiations," saying only that they discussed "relevant aspects of international security, including the situation in Ukraine."

The Pentagon relies on back-channel discussions with Russia and other adversaries as a means to avoid missteps or miscommunication that could inadvertently trigger wider conflict. The United States has expanded its military footprint in Eastern Europe and in the Baltics in response to the Ukraine war, and the dearth of conversation between Washington and Moscow has become a source of concern - notably so as Russian President Vladimir Putin has suggested again in recent weeks his willingness to employ nuclear weapons.

The risk of an unintended misread has been elevated for months. American personnel in Poland are involved in the transfer of Western weapons and other military supplies to Ukraine, while U.S. and NATO jets continue to conduct operations over the Baltic Sea.

The "deconfliction line" between the United States and Russia went cold after the invasion, with repeated U.S. calls to Moscow going unanswered, officials have said. During Austin's last call with Shoigu, on May 13, the defense secretary "urged an immediate cease fire in Ukraine." Friday's readout included no mention of Austin having made a similar appeal.

The dialogue, though, was more frequent before the war began. In late February, with the invasion imminent, the pair held a tense call in which Austin pushed Shoigu to come clean about the Kremlin's intent to attack. As The Washington Post reported previously, he told the Russian leader, "I know what you're doing."

U.S. officials have described their limited conversations since then as "professional."

Shoigu has faced growing political pressure at home over Russian forces' recent retreats in Ukraine, with hard-liners openly attacking the military command for setbacks in areas the Kremlin has claimed to have annexed. The defense minister has appeared increasingly vulnerable after the succession of humiliating military failures, which last month forced Putin to order the mobilization of hundreds of thousands of reservists.

Austin's outreach to Shoigu comes as Russia, facing harsh Western sanctions and other punitive economic measures, has turned to Iran for help amid its mounting battlefield losses. The White House this week affirmed reports that Tehran had dispatched a small number of personnel to assist Russian operators using Iranian-made drones to target key infrastructure in Ukraine. The United States has viewed wreckage of the unmanned aircraft, which could prove advantageous as Ukrainian forces seek better means to defeat them.

Ukraine is looking to solidify battlefield gains in the east and south before winter sets in, when both sides will likely slow operations. The offensive push marks a crucial test for Ukrainian forces and whether they can maintain pressure on Russian's already beleaguered supply lines.

The Washington Post's Robyn Dixon in Riga, Latvia, contributed to this report.