Macron accuses US of trade 'double standard' amid energy crunch 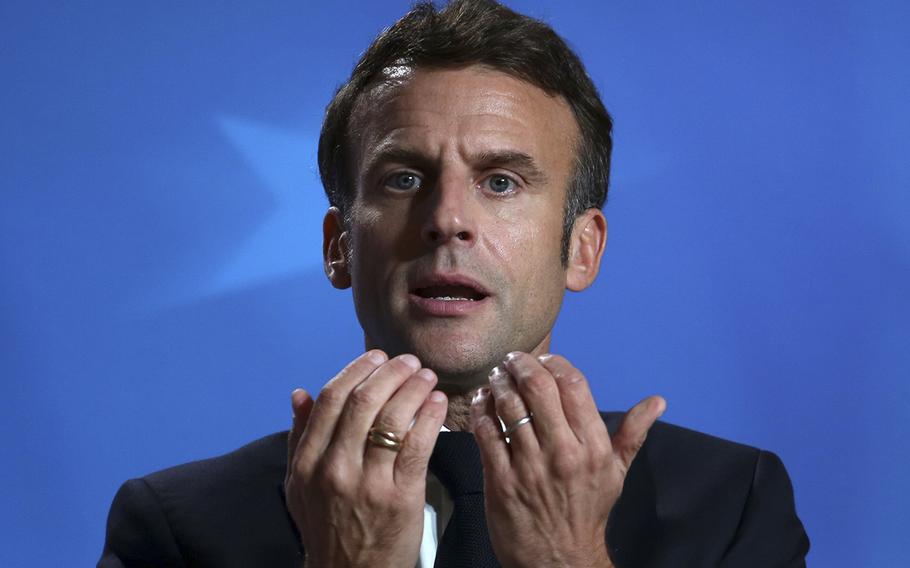 French President Emmanuel Macron speaks during a briefing at the European Council headquarters in Brussels on Oct. 21, 2022. (Valeria Mongelli/Bloomberg)

French President Emmanuel Macron slammed U.S. trade and energy policies for creating "a double standard" with Europe as resentment builds over the economic price the continent is paying over Russia's war in Ukraine.

"The North American economy is making choices for the sake of attractiveness, which I respect, but they create a double standard" with lower energy prices domestically while selling natural gas to Europe at record prices, Macron said at a news conference in Brussels following a meeting of European Union leaders.

"In addition they allow state aid going to up to 80% on some sectors while it's banned here -- you get a double standard," he added. "It comes down to the sincerity of transatlantic trade," he added.

The EU has been chafing over the U.S. stimulus package known as the Inflation Reduction Act, which provides subsidies for electric cars made in North America and provides what European officials say is unfair support for green economy.

The 44-year-old Macron will be hitting these points hard when he visit Washington D.C. for a state visit in early December. That's a bit more than a year after the bilateral relationship suffered a major blow when Australia dropped a mega deal to buy French submarines in favor of nuclear-powered submarines from the U.S..

France briefly recalled its ambassador to the U.S., but ties improved after Macron met with Joe Biden in Rome on the sideline of a G-20 summit. Biden pledged to support France in its fight against terrorism in the Sahel, and acknowledged the importance of strengthening EU defense, a long-time battle for Macron. The U.S. and Europe have also forged an extremely close working relationship in responding to Russia's invasion of Ukraine.

But cracks are starting to emerge. On Friday, Macron called out U.S. and Norway as energy producers who make "the real superprofits" benefitting from "geopolitical war unearned income." He said he has discussed the topic "in a friendly way" with his U.S. and Norwegian counterparts.

During a parliament debate, French finance minister Bruno Le Maire criticized the U.S. for selling liquefied natural gas to European companies at "four times the prices at which it sells it" domestically. He was echoing previous comments by Macron, who has said that EU should join with Asian economies to demand that the U.S. and Norway show greater friendship by selling gas at lower prices.

France's foreign affairs minister Catherine Colonna is traveling to Washington Friday to discuss these issues and gauge the situation before the U.S. midterm elections, a diplomat familiar with the planning said. Colonna will also be discussing Ukraine, U.S. exports of LNG to Europe as the continent seeks to diversify away from Russian fuels, fair competition and the future of the nuclear deal with Iran.