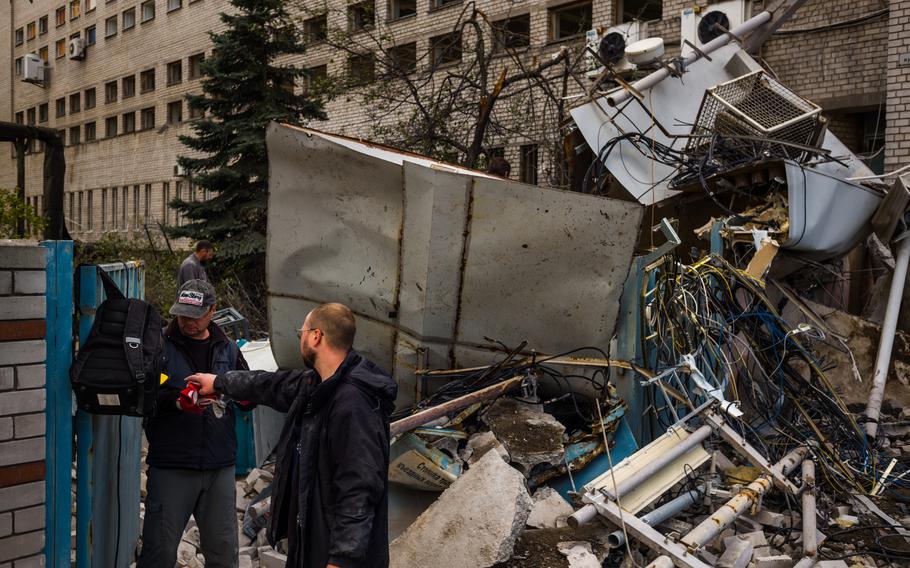 KYIV, Ukraine - Dmytro Shumskyi stood in the middle of the field in northern Ukraine with the Stinger air defense missile perched on his shoulder. “It’s coming!” his comrades yelled from behind him. Through the clear-blue sky, a small black streak flew past, followed by a loud whoosh - part of a barrage of missiles earlier this month that Russia said was retaliation for an attack on the Crimean Bridge.

Shumskyi waited for the telltale crack and squeal of the Stinger and then launched his missile at the Russian one now in the distance. Behind him, his fellow Ukrainian soldiers yelled profanities, willing the enemy’s weapon to fall.

Something flashed on the horizon, followed by cloud of smoke from the explosion - success on a nearly impossible shot. Stingers are short-range missiles typically used against lower, slow-moving targets such as helicopters. Shumskyi took out two missiles with them. He was quickly heralded as a hero, having probably saved civilian lives that day.

But with Moscow stepping up its air campaign, targeting Ukrainians and critical infrastructure far from the front line, Shumskyi was also a symbol of the dire, ragtag state of Ukraine’s air defenses.

“Right now, our air defense is literally a guy with a Stinger,” said Daria Kaleniuk, the executive director of the Anti-Corruption Action Center in Ukraine. Kaleniuk has been meeting with Western politicians to advocate for Ukraine to receive modern fighter jets and other weapons.

NATO powers supporting Ukraine - furious over Russia targeting facilities that provide heat, electricity and water to civilians - have promised to rush sophisticated air defenses to the country in response to Russia’s shift in tactics. Washington said it would expedite its shipment of two air defense systems known as NASAMS; six more will be delivered over a longer time frame. Germany has pledged four IRIS-T systems.

But in some ways they are already too late. Ukrainian President Volodymyr Zelensky had been pleading for air defense assistance virtually from the start of the nearly eight-month-old war.

On Oct. 10, Russia launched 83 missiles at Ukraine. Forty-three were shot down, but the 40 that landed caused death and destruction throughout the country.

Amid Russia’s bombardments, Ukraine’s air defenders have been forced to get creative. Last week, a meme was widely shared by Ukrainians on social media: people thanking God for peaceful skies above a photo of a man with an unamused expression meant to represent a soldier in Ukraine’s air defense forces who had worked 36 hours straight.

Capt. Volodymyr Klymin, a deputy battalion commander working with S-300 surface-to-air missile systems in the Kyiv region, said that he found the meme funny but that in reality soldiers work in short shifts to stay fresh and alert.

The challenge for Ukraine’s air defenses is not about hitting incoming missiles once they are spotted and the system locks on it. Klymin said his unit, for example, has never missed. The problem is that Ukraine does not have enough air defense units to cover every part of the country.

“There are some Russians who are not stupid and know how to think,” Klymin said. “And so they’re trying to get around our air defense systems by using the landscape or intelligence about where we’re located. They’re trying to beat us, too. But if the system sees the target and locks in on it, then it will shoot it down.”

It’s a chess match of sorts.

The locations of Ukraine’s air defenses are constantly changed to better position them for missile routes the Russians might use. And then the Russians adjust in response. Ukraine’s need for Western air defenses is to close the coverage gaps, especially with systems that can fire missiles at longer ranges. The S-300 missiles have a range of about 46 miles. The U.S.-provided NASAMS - the National Advanced Surface-to-Air Missile System - is a midrange system with radar that can see threats up to roughly 80 miles away.

At issue, too, is that most of Ukraine’s systems date to the Soviet Union, meaning they are more than 30 years old in a best-case scenario. The NASAMS and the German-provided IRIS-T systems are much more sophisticated at locating targets, by integrating different sources of radar data and then engaging them, said Denys Smazhnyi, the chief of training for Ukraine’s antiaircraft missile forces.

“We need to replace our old systems because they will simply not be able to cope with these threats soon,” said Smazhnyi, who is abroad learning how to operate the NASAMS. “And we are running out of missiles.”

The Ukrainians are so desperate to conserve precious surface-to-air rockets to counter Russia’s high-precision missiles that cause the most destruction that fighter jets have started scrambling to shoot down the many kamikaze drones Russia has started launching across the border.

One pilot took out five before he had to eject from his aircraft in the western Vinnytsia region, military officials said.

“Now aviation has proven to be an effective method against these drones,” said Yuriy Ignat, spokesman for Ukraine’s air force command. “But I don’t think there’s a way out of spending missiles on them. No matter what, we’re still going to use every resource we have today because it’s a high-precision weapon.”

The arrival of NASAMS is still weeks away, according to U.S. officials, and Smazhnyi said the training for Ukrainian soldiers getting on the system is half the time of a regular course. Until the NASAMS arrive, the Ukrainians will continue making do with what - and who - they have.

“Every fisherman needs to carry portable air defense systems with them,” Ignat joked. “After all, the Russians often fire their missiles low along rivers.”

The Washington Post’s Kamila Hrabchuk contributed to this report.