The uncomfortable need to talk about diplomacy with Russia 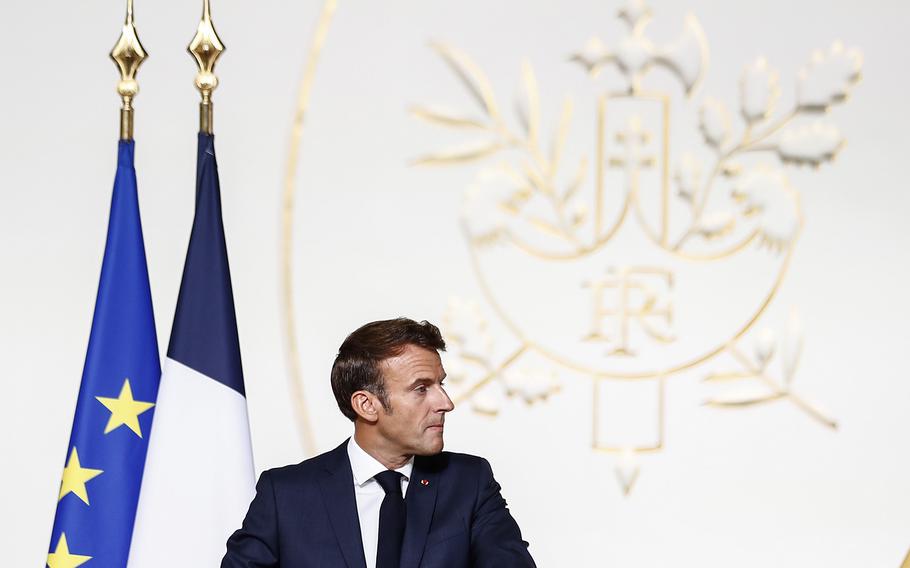 French President Emmanuel Macron speaks during a conference at the Elysee Palace in Paris, on Sept.1, 2022. (Mohammed Badra, Pool)

Tech billionaire Elon Musk drew flak earlier this month for tweeting his vision of a peace plan between Russia and Ukraine that appeared to favor the Kremlin's agenda. He called for a resolution to the ongoing war that, among other things, would see Ukraine cede its claims to Crimea. The rationale for this, Musk argued, was that Russia would sooner deploy tactical nuclear weapons on the battlefield than countenance the loss of the strategic and culturally symbolic peninsula. Concessions to the invading power would be preferable to falling into a spiraling nuclear conflict.

The backlash was scathing - with policy experts and Ukrainian and Western officials scoffing at the logic of nuclear blackmail imposed by Russian President Vladimir Putin and parroted by Musk. "There can't be a compromise based on him not setting off a nuclear weapon if we hand over Ukraine," Fiona Hill, a Russia scholar and former Trump administration official, told Politico. "Putin is behaving like a rogue state because, well, he is a rogue state at this point. . . . We have to ensure that he's not going to have the effect that he wants with this nuclear brinkmanship."

How to do that is, of course, the giant conundrum surrounding the war in Ukraine.

The United States and its European partners continue to provide military aid and arms to Kyiv in the hope that Ukraine can press its current advantage, reclaim territories seized by Russia over the past eight months and, at the very least, win itself a stronger hand whenever the warring parties do attempt meaningful negotiations. The Kremlin, meanwhile, has responded to its recent setbacks with violent escalation, launching indiscriminate strikes on civilian areas in Ukraine while also targeting the country's energy infrastructure.

The latter tactic is part of Russia's broader strategy to weaponize the imminent winter in its favor, leaving Ukrainians in the cold and dark while also raising energy costs - and domestic anger - across Europe. "Putin seems to believe he can coerce his enemies into quitting before he suffers a major defeat, while the U.S. is acting as though it can deter Putin from escalating long enough for Ukraine to prevail," wrote Hal Brands for Bloomberg Opinion. "The result of all this is a violent, unstable equilibrium, one that cannot hold forever as committed participants pursue irreconcilable goals."

The specter of nuclear conflict looms, though Western observers believe Putin should be called on his bluff. Others more sensitive to the Kremlin's position disagree. "NATO leaders seem convinced that Putin, whom President Biden recently described as a 'rational actor,' would not dare reach for the nuclear arsenal," wrote Dimitri Simes of the Center for the National Interest, a Washington think tank. "Some leaders even seem to believe that Moscow is now paralyzed by concern over Western retaliation. But the time when Moscow is prepared to use all available options short of strategic nuclear weapons may be much closer than Western leaders and experts seem to think."

U.S. officials have warned that all options for reprisal in the event of a Russian tactical nuclear attack are on the table, but it's an untested threat - for decades, Western strategists have seen the option of military action as a deterrent. What happens when deterrence fails?

Biden himself has likened the peril of the moment to that of the Cuban missile crisis. It's a grim analogy, given how some analysts argue that, 60 years ago, Cold War channels of communication between Washington and Moscow were more robust than they are now. "The current crisis is far worse than the Cuban missile crisis, in part because during the Cuban missile crisis both [President John F.] Kennedy and [Soviet leader Nikita] Khrushchev were willing to discuss a way of walking back the confrontation," Cynthia Hooper, a Russia expert at the College of the Holy Cross, told Insider. "There is no such option on the table here."

Multiple European officials visiting Washington have told Today's WorldView in recent months that their visibility into the Kremlin's thinking is more limited now than it has ever been. Though the United States privately conveyed warnings to Russia about the consequences of using a nuclear weapon, the contacts are narrow in scope and access. Putin may be bunkered and warmongering in isolation, but the sense of uncertainty and danger surrounding the war is only deepening.

Attempts by some Western European leaders, including French President Emmanuel Macron, to locate an off-ramp for Putin have only incurred the scorn and wrath of those more hawkish on Russia. "For some of Ukraine's most ardent backers, even talking about diplomacy amounts to appeasement," wrote Financial Times columnist Gideon Rachman. "Their argument is that the only acceptable and realistic way to end the war is for Putin to be defeated. This is fine as a statement of principle, but not hugely helpful in practice."

Diplomacy should not be the alternative to prosecuting the war effort, Rachman argued, but take place simultaneously. Though it's difficult to see where the momentum for such dialogue may come. "Privately, U.S. officials say neither Russia nor Ukraine is capable of winning the war outright, but they have ruled out the idea of pushing or even nudging Ukraine to the negotiating table," my colleagues reported last week. "They say they do not know what the end of the war looks like, or how it might end or when, insisting that is up to Kyiv."

The engagement of non-Western actors could move the needle. An earlier round of talks between Russia and Ukraine went nowhere, but we did see the success of a Turkish-led effort that helped release Ukraine's blockaded grain stocks to a hungry world. Other regional leaders, including the UAE president and the emir of Qatar, have also stepped up calls for a cessation of hostilities and offered to mediate between Moscow and Kyiv.

"Turkey has made it no secret that it wants to help mediate a broader cease-fire agreement between Ukraine and Russia, with Ankara hoping that the experience of the grain deal - as well as a more recent prisoner swap it mediated along with Saudi Arabia - can be leveraged toward this objective," wrote Eugene Chausovsky, senior analyst at the New Lines Institute. "Successful mediation that produces tangible results, even on relatively small issues, can build the groundwork for future de-escalation."

Western officials have their doubts over how successful such contacts may prove, and are placing little hope in the conversations Putin may have with, for example, concerned Chinese and Indian interlocutors. But there may be a pathway there to lower the temperature, at least on the nuclear front.

"Two years ago, Putin offered to remove Russia's new ground-based intermediate-range nuclear missile from Europe under verifiable conditions, thus underpinning a moratorium on such missiles in Europe," wrote Rose Gottemoeller, a former deputy secretary general of NATO. "When Putin and Xi Jinping met in Beijing prior to the February invasion, they spoke of extending such a moratorium to Asia. Perhaps it is time to launch discreet talks, if only at a technical level, to explore what the two men had in mind."