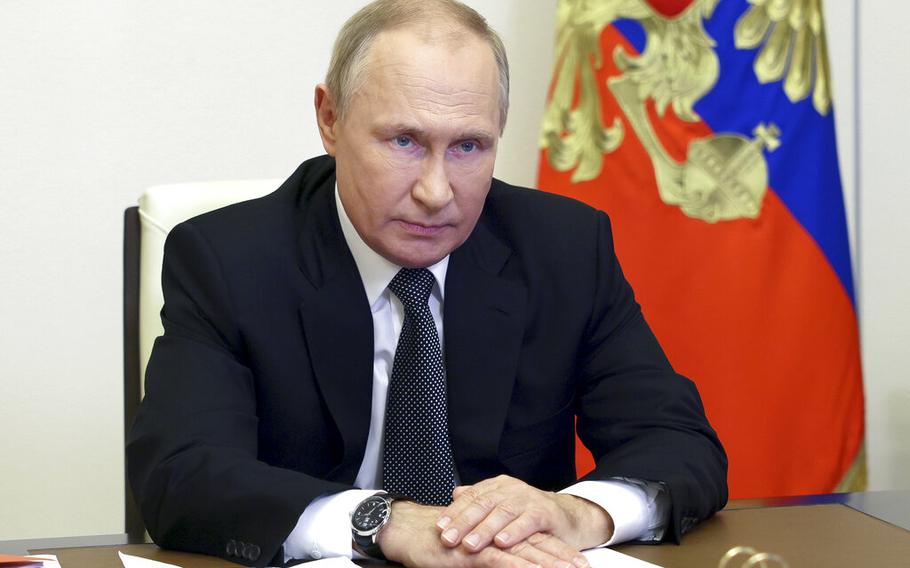 (Tribune News Service) — President Vladimir Putin ordered dramatically heightened security, including restrictions on movement, in regions along the border with Ukraine as attacks have spread into Russian territory.

Citing strikes in recent weeks in border zones and a bombing on his showcase bridge to Crimea, Putin told a televised meeting of his Security Council that he's ordering stepped-up measures across much of the country. He also extended existing martial-law regimes in the four Ukrainian territories he annexed last month.

Russian forces have steadily lost ground over the last two months to a Ukrainian counteroffensive that has retaken large areas of the zones Putin claimed to annex. On Wednesday, Russian occupation authorities in the city of Kherson in southern Ukraine said they were relocating to areas further back from the front lines as Kyiv's troops continued to press forward and cut off their supply lines.

Putin's new measures impose higher security in six regions of Russia near the Ukraine border, as well as Crimea, which he annexed in 2014, underlining how his eight-month-old war has spread. The new rules impose limits on movement in and out of the regions, allow local authorities to relocate civilians away from combat zones, boost military production and give increased powers to military officials.

Areas further back from the front lines, including Moscow, also will see unspecified restrictions on movement, according to the text of Putin's decree.

"Putin's decree in effect brings several Russian regions on the border with Ukraine into the perimeter of the war," said Alexander Baunov of the Moscow Carnegie Center. "It looks like a trial run of emergency mechanisms in several regions that can then be expanded to other territories."

The government isn't planning to close the country's borders as a result of the order, Kremlin spokesman Dmitry Peskov said, according to the RIA Novosti news service.

Putin said Prime Minister Mikhail Mishustin will take charge of a new coordinating council to work on security issues nationally. Regional governors will also get broader powers to deal with security and support for families of reservists called up for military service, he said.

Russian occupation authorities said earlier they're leaving Kherson for the eastern bank of the Dnipro River as Ukrainian forces continue a counteroffensive in the area. Russia-appointed Governor Vladimir Saldo told state television there are no plans to surrender the city, which was the first regional capital to fall to Russia in the invasion.

The state-run Tass news service reported that Russian officials sent out text messages alerting residents of the city early Wednesday and plan to relocate as many as 60,000 people from areas on the western side of the Dnipro.

Russian forces are expected to retreat to the river's western bank and to try to keep a defensive line there, local council deputy Serhiy Khlan, who left Kherson region, said on TV Wednesday. "For now we have 29 settlements of Kherson region already liberated. Together with Kherson we will see the whole right bank side of Kherson region free from occupiers," Khlan said.