In Kupiansk, in northeast Ukraine, liberation came at a steep cost 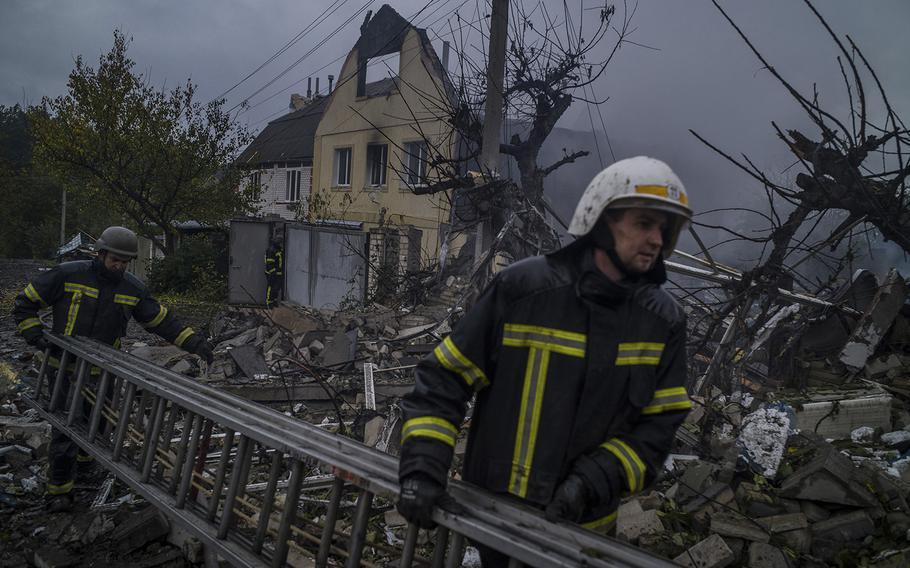 Firefighters work in a house that was destroyed in a rocket strike in Kupiansk on Oct. 10, 2022. (Wojciech Grzedzinski for The Washington Post)

KUPIANSK, Ukraine - The Russians occupied this northeastern Ukrainian city split by the Oskil River without firing a shot, marching in on a bitterly cold February morning. In a live-streamed address, the mayor said that he had let them in without resistance.

Touring Kupiansk with Russian soldiers, the mayor, Gennady Matsegora, later told residents that he had surrendered to prevent the area being shelled, and the city swiftly became a seat of occupation rule.

As residents walked passed banners of red, white and blue, like Russia's flag, many longed Ukraine to retake control. They could not know then that liberation would cost widespread destruction.

Since Ukrainian soldiers reentered the town on Sept. 9 as part of a counteroffensive that has recaptured large swaths of occupied territory, their arrival has been accompanied by nightly attacks from the retreating Russians.

A hospital was bombed and a home for the elderly and mentally unwell almost suffered the same fate, forcing the mostly frail and infirm to be evacuated.

When homes are destroyed, residents cannot even use cellphones to inform loved ones - there has been no power in the city for a month now.

Kupiansk was a strategic prize for each side, with a bridge across the Oskil River, and a railway depot which can be used for resupply. Russian President Vladimir Putin was preparing to declare this land Russia. When Ukrainian forces entered the town, civilians met them with tears of relief. The joy was short-lived.

"It only took three days for the Russians to start attacking the administration here," said Andriy Kanashevich, head of Kupiansk's new military administration, who arrived on Sept. 10 after a Russian-appointed mayor had fled.

"When they moved across the Oskil, they started firing."

For those who remain, life after occupation now poses fundamental questions. Do they stay and trust that better days are coming? Can they even trust their neighbors anymore?

Thousands of residents have left Kupiansk since the attacks began, according to local officials. On Monday, a middle-aged man picked his way across the pedestrian part of the bridge as fast as he could, stopping only to glance behind him when shelling echoed out. "You want to know why I'm leaving," he shouted at the few passersby. "There's your answer."

Kupiansk's electricity grid is down as a frigid winter looms. The hospital, police station and other administration buildings have been damaged. In recent days, the intensity of Russian strikes has increased again, at times seemingly targeting military positions, but hitting civilian properties too.

In the pouring rain this week, firemen were fighting the latest blaze in a family home.

The eleven year old boy who lived there, Andriy, was watching them closely, and wondering how he would tell his mother that their house was gone. His family's cellphones weren't charged, and with a front line eight miles away, the telecommunications network was patchy anyway.

When the Russians occupied Kupiansk, Andriy, whose surname is being withheld to protect him and his family, stayed behind to look after his 73-year-old grandmother, Valentina. Now their birth certificates had been burned with their house. Andriy surveyed the ruins without a word. His thin jogging pants were soaked.

On the verge of tears, their neighbor, Olena, reminded Andriy and his grandmother of a pacifist song that laments pointless death in war called "Do the Russians Want a War." "Of course they want it," Olena shouted. "Look at this place."

The battle to retake Kupiansk smashed much of its town center.

Surveying the panorama of burned buildings before him, a 34-year-old commander with Ukraine's Honor Battalion, Denis, said that the two sides had used "everything" on each other. "There was tank fire, artillery, small arms," he said. At times, the sides engaged in close combat - just 30 meters apart.

A cluster of houses several miles south was shelled so intensely that it is barely rubble now. White walls became stumps. Pine trees are snapped like charred matchsticks. Russian and Ukrainian forces traded control of the area four times before the Ukrainians prevailed, the commander said.

The Russians made mistakes in retreat. Instead of fully destroying the town's bridge over the Oskil, they left a thin walkway still standing. Ukrainian units crossed on foot and attacked Russian lines from behind.

Unclaimed bodies from the resulting ambushes litter the ground where they did so, exposed to the rains or churned deep in the mud. At least two men were killed beneath the wheels of their own tank. Other bodies are hidden by the forest.

As residents jostled for aid from a humanitarian aid truck outside Kupiansk this week, a man approached the crowd to ask for help. "They took most of the bodies from outside my house, but there's still one there," he said. "What am I meant to do?"

Kupiansk's new authorities must now reestablish basic services, but the challenges are steep. Electricity is a priority; winter proofing houses is another. At this stage, however, they can do little more than cover broken windows with plywood.

In many cases, anxious residents are now confused over who to turn to for basic requests. "Of course they're stressed, they don't have a central organization that they can trust because there isn't a full-time administration in the city yet," said Vadim Krokhmal, a member of the returning city council.

On his Facebook page, Krokhmal has shared a list in Russian of residents who allegedly got salaries from the invading Russians. The new city chief, Gubin, received 280,000 rubles, roughly $4,500 for 21 days work. A departmental head got $720. Secretaries and accountants, $400. The Washington Post was not able to independently verify the list, which Krokhmal said was left behind in a government building.

"A lot of people here didn't know how many residents were receiving money from the Russians," he said. "What this list clearly shows is that some people just needed a place to work and feed their families, and some were working directly for the Russian government."

In dozens of interviews with residents across Kupiansk and its surrounding villages, many said they believed the Russians would return.

Sitting at her desk in the city's only residential facility that cares for the elderly and mentally unwell, Olga Gunia was exhausted. For 23 years, she had poured everything she had into the place, and she said that her patients had taught her more about love and patience than she had ever imagined possible.

The Russians' occupation felt like a waking nightmare, she said. Patients were evacuated to the home from nearby Izym. "We work hard to keep our patients calm, but when these other people came in, they were not well," she recalled. "It felt like a scene from a horror film." Over time, she said she sank into a depression, but did her best to hide it.

But one day in mid-September, Gunia saw troops in the street. They were carrying Ukrainian flags. Relief overwhelmed her, but within days there was discomfort rising too. Rockets started landing around the care home.

One hit an empty bedroom, causing damage. She saw fear in the eyes of patients she had spent months trying to soothe. In liberation, her team felt more powerless than ever. Without electricity or running water they couldn't wash the old people properly. A stench remains despite efforts to clean.

Gunia agreed last week that the most infirm should be evacuated. And on the train out with them, she realized that her time in Kupiansk was over too. She left Friday with the last evacuees.

Just a few miles away near the village of Kurylivka, a convoy of civilian vehicles was fired upon and 25 people were killed as they tried to escape the fighting on Sept. 25, toward the Russian-controlled city of Svatove, in the Luhansk region.

On Oct. 1, their bodies were discovered next to abandoned fields where the sunflowers died too. The passengers' bags of walnuts and cassette tapes are still there. Cars were splayed at strange angles and the smell of decaying flesh clings to the long grass.

Denis, the commander, was shocked when his unit found them. After eight years in the army, he was used to seeing death, but with the bodies of young children there, this felt different. They likely did not know that the Ukrainians were coming, he said.