As morale suffers, Russia and Ukraine fight a war of mental attrition 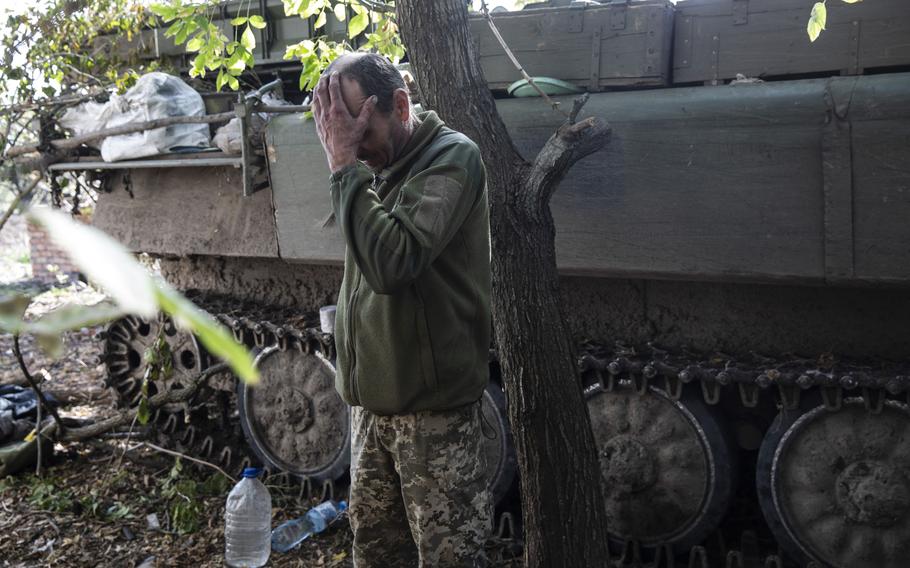 A Ukrainian soldier rests by a military vehicle in a liberated village in the Kherson region in October 2022. (Heidi Levine for The Washington Post)

KHERSON REGION, Ukraine — A few months ago, as Ukraine's military was still struggling to break through Russia's defenses in the southern Kherson region, members of the 60th Infantry Brigade managed to snatch one of the Russians' Motorola radios and listen in on their enemy's conversations.

They chuckled at the call signs the Russians picked for themselves — one even went by "Maidan," a reference to Kyiv's central square, the Ukrainian troops said. But they also marveled at the constant griping they heard.

One time, a Russian soldier said he hadn't been fed at all that day. On Aug. 24, exactly six months after Russia launched its attack on Ukraine, one Russian told another over the radio that it was the anniversary of when they "were all fooled," the Ukrainians said.

"They're demoralized," said a 24-year-old Ukrainian soldier in the 60th Brigade who, like others in this story, asked to be identified by his call sign, Porokh. "You could hear it in the tone of their voice and what they were saying."

But Ukrainian soldiers are also feeling fatigue — physically and mentally — even though they are more motivated because they are defending their homeland and trying to protect civilians dying daily in Russian attacks. Some units, like the 60th Brigade, have not had a break from battle action since the start of the war nearly eight months ago. The fight is unyielding, and commanders fear a drop in performance if less experienced forces rotate in.

As the dark days of winter approach, keeping up morale is a challenge for each side in what is quickly morphing into a war of mental attrition.

In Moscow's ranks, the casualty count is high and forces have been in a retreat for more than a month — first in the northeast Kharkiv region and now in Ukraine's south. Russian President Vladimir Putin's recent mobilization has forced men who might not believe in the war to fight in it.

On the Ukrainian side, the men from the 60th Brigade are not the only ones who haven't gotten an extended break. The 93rd Mechanized Brigade went from helping expel the Russians from the northern Sumy region in the spring to holding the line near Izyum over the summer, and it is now under constant bombardment in the Donetsk region. 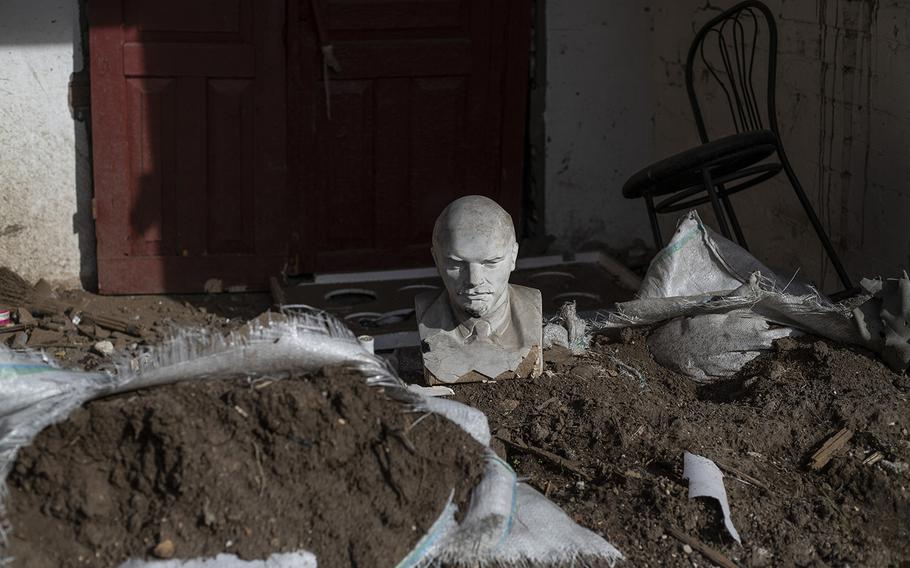 A small bust of Vladimir Lenin rests on the ground outside a school used as a headquarters for the Russian military when it occupied the village of Khreshchenivka in the Kherson region. The village was liberated by Ukrainian forces. (Heidi Levine for The Washington Post)

One soldier in the brigade said his battalion already has "many losses" and "not enough strength or resources," which was why he said he was concerned about Russia sending 300,000 or more reinforcements to the front — even if they are unmotivated and poorly trained.

"People need some rest," the soldier said, adding that the situation will worsen once the weather turns colder.

The difference between now and the prior eight years of fighting Kremlin proxies in the eastern Donbas region is that, for much of that time, soldiers could take vacations from the front. There were regular rotations. And their contracts for service had end dates.

"If a person knows that he has to serve nine, 12 or 16 months, he can prepare himself physically and mentally," said a 32-year-old lieutenant whose call sign is Historian. "Here, we don't know when we will return home."

"Some of the people we mobilized had never served at all," Historian added. "They were not prepared for these kinds of battles."

This war has no end in sight. And while more Ukrainians probably will be conscripted — since Russia's invasion began, men under age 60 have been barred from leaving the country in case they are needed — the soldiers and volunteers already fighting worry about how ready the new draftees will be for combat.

As one soldier put it, "There is a war going on, and everyone who was ready to fight went right away."

Porokh and Historian's company was one that helped advance the southern front line dozens of miles along the western bank of the Dnieper River this month, pounding the Russians as they retreated.

But while the successful counteroffensive lifted spirits, the loss of comrades killed in the process left has taken a heavy emotional toll. Porokh's platoon lost its commander during a battle this week, and he struggled to speak about the death. "We're a family here," he said. 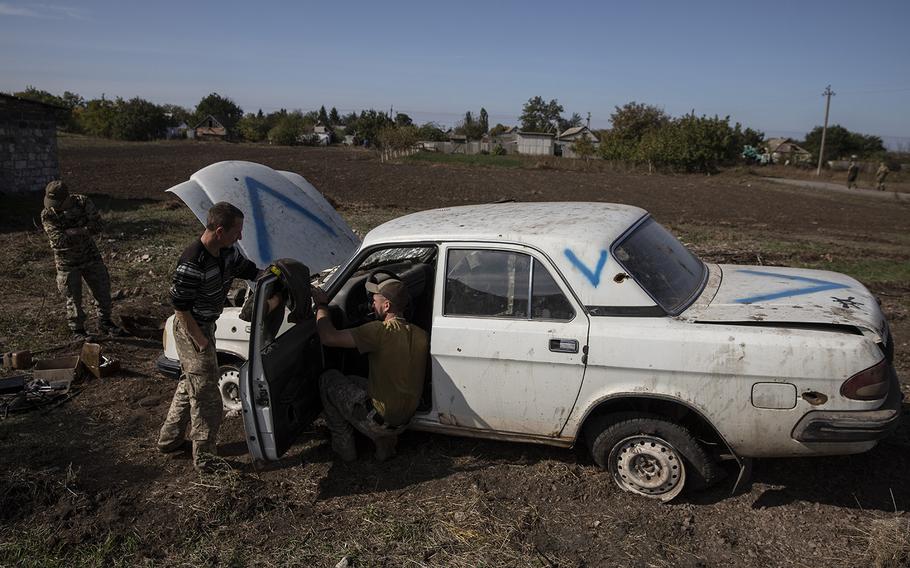 Ukrainian soldiers by an abandoned vehicle Sunday in the Kherson region. (Heidi Levine for The Washington Post)

The chief sergeant for the battalion, who goes by the call sign Alimych, listed three company commanders who were wounded during Ukraine's advance. Russia's losses were far greater, he said, and sergeants stepped up in the middle of battle when their senior officers went down.

Just two Ukrainian battalions — one from the 128th Mountain Assault Brigade and one from the 60th Brigade — led the offensive along the western back of the Dnieper River, pushing the Russians all the way back to the town of Dudchany. Those units remain in the region but have been ordered away from combat for a few days to recharge.

The counteroffensive has continued without them. Ukraine now has full control of Dudchany, while Russian forces are massing further southwest in Mylove. But since their retreat, the Russians have had time to establish a third line of defense, members of the 60th Brigade said. Forcing them to retreat again will be difficult.

Ukrainian soldiers here, however, are confident that the mental war plays to their advantage.

Alimych showed Washington Post reporters a video on his phone of a Russian prisoner who had surrendered two days earlier. He was part of Putin's new mobilization and had showed Alimych a military identification that revealed he was conscripted just a week earlier.

"A person without experience who was working at a construction site and has no motivation to fight, I don't know why they brought him here," Alimych said. "He doesn't know why he's here."

When Porokh first heard the plans for the southern counteroffensive late last month, he was in disbelief. He thought it was too aggressive and too brazen.

As his platoon approached a Russian position near the town of Zolota Balka along the river, the Ukrainians simultaneously attacked each flank in a pincer movement. While infantry units were approaching from one side, tanks and armored vehicles were already encircling from the other. 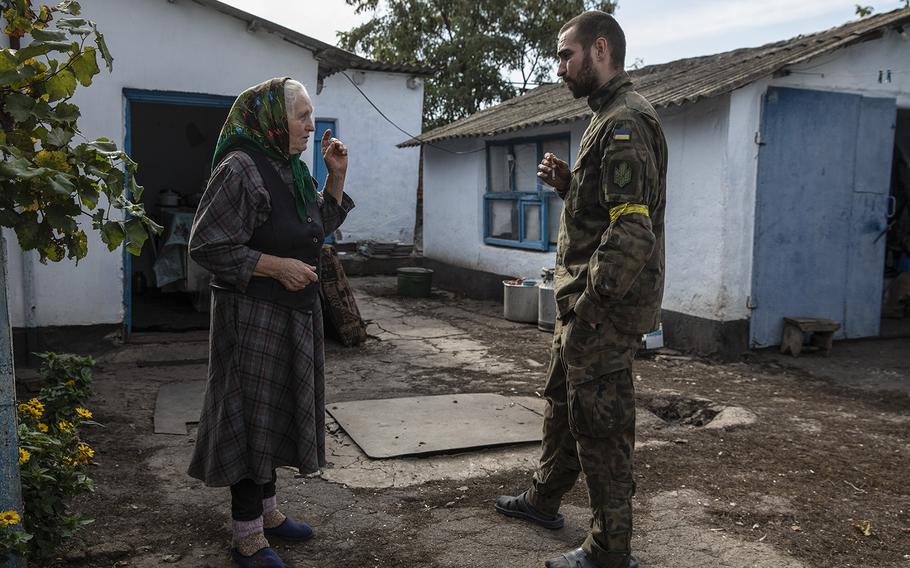 Valentyna, 70, speaks with a soldier who goes by the call sign Porokh and is sleeping along with other soldiers in her home in the Kherson region. (Heidi Levine for The Washington Post)

"This audacity shocked them, too," Porokh said. "So they ran."

Another soldier in the unit, 57-year-old Zil, ripped a machine gun out of the hands of a Russian corpse. He still has the bloodstain on his pants from tussling with the dead body. But the model was newer than the one the Ukrainians had, so it was worth it, he said. Porokh has already repainted the gun.

To clear his head from battle, Porokh likes to drive an hour to the nearest city and be around some civilization, where not everyone is dressed in military uniform. What gives Zil some comfort is spending time with locals wherever his platoon happens to be based. In one village, he regularly fed one house's abandoned pigs until the owners came back for them. Zil, who was a roofer before the war, helped another man fix his home that was damaged by shelling.

"This was people's livelihood," Zil said. "What did they do to deserve this?"

Sitting in the yard of their current base, the soldiers debated what the infusion of freshly mobilized Russian troops will mean.

Zil said he felt sorry for the loss of life that was coming. Porokh said he didn't, and he shrugged off men thrust into battle with no experience or motivation to fight as not much of a strategic headache. A third soldier in the platoon, with the call sign Zeus, warned not to underestimate the enemy.

"They could turn into elite fighters in a month after they get some experience," Zeus said. "We don't know. We didn't all have experience when we started."

Then the men went their separate ways — some to meet world champion boxer Oleksandr Usyk, who was visiting Ukrainian forces in the region that day as a morale boost.

As Historian, the group's deputy company commander, walked to his car, Zeus stopped him and asked him to appeal to senior officers for the unit to get a well-deserved break.

"I'll mention it again," Historian told him. "I promise."