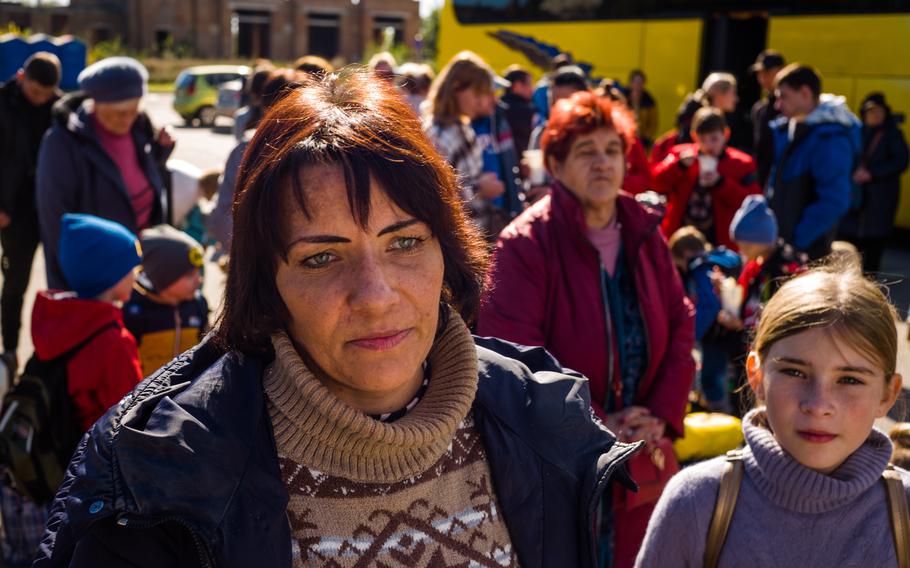 A woman and her daughter wait for buses leaving Zaporizhzhia on Wednesday. (Wojciech Grzedzinski/The Washington Post)

ZAPORIZHZHIA, Ukraine — While raining missiles down on Ukrainian land it has failed to capture on the battlefield, Russia is seeking to solidify its illegal annexation of four regions by imposing new border controls and limiting travel outside of occupied territories.

The new measures demonstrate the Kremlin’s intent to absorb the four regions despite widespread global censure, including demands by leaders of the Group of Seven industrialized powers that Russia “completely and unconditionally withdraw” its troops.

Ukrainian civilians who fled Russian-held territory in recent days said in interviews on Wednesday that they were required to provide extensive documentation to leave, including birth certificates, expected return dates, and even the serial numbers of their cellphones.

In Zaporizhzhia, a region that Russia now claims as its own but only partially controls, the new measures have slowed the exodus to a trickle in recent days. People hoping to reach Ukrainian-controlled territory fear exposing their families to Russian scrutiny.

“The Russians are trying to install a permanent, official border crossing, and so these are the measures that they are trying to establish,” said Oleksii Savytskyi, a Ukrainian official who oversees the arrival of civilian convoys from Russian-held territory to the regional capital, also called Zaporizhzhia, which is still under Ukrainian control. 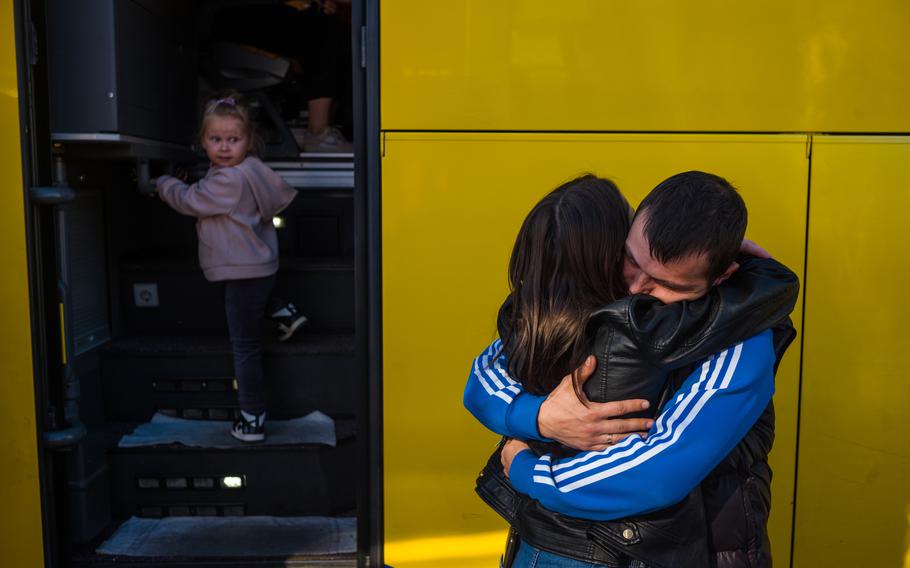 The heightened restrictions came as Western allies rushed new weapons to Ukraine, including state-of-the-art German IRIS-T air defense systems, in response to the barrage of Russian missiles in recent days that hit power plants and other critical infrastructure and killed at least 20 people across Ukraine.

The missile attacks were a main topic of discussion in Brussels on Wednesday as members of the international Ukraine Defense Contact Group, led by U.S. Secretary of Defense Lloyd Austin, met at NATO headquarters and said they would increase military assistance to Kyiv. Allied defense ministers were due to continue those conversations Thursday.

Russia’s effort to tighten control over occupied areas underscored the enormous stakes of a Ukrainian counteroffensive that moved swiftly in September and early October but has now slowed.

Before Russian President Vladimir Putin’s Sept. 30 announcement that four Ukrainian provinces now belonged to him, arrivals in the city of Zaporizhzhia from occupied areas had averaged about 2,000 people a day, officials said.

The number has plummeted to about 60. Families applying for permission to leave have at times spent up to two weeks sleeping in gas stations or hotels as they shuttle between Russian security agencies, which often provide contradictory information.

On Wednesday, scores queued in Zaporizhzhia to board buses bound for the Ukrainian capital, Kyiv, many of them intending to leave the country entirely.

They were quiet as they waited and carried few possessions. Families interviewed by The Washington Post said they had not even contemplated leaving until this week.

But Putin’s annexation announcement was followed by waves of S-300 missiles each night. Parents hustled their children into basements. “I just knew we couldn’t stay anymore,” said Sasha Valuiskyi, 31, as his wife and two children boarded a bus.

Valuiskyi, however, was not going with them. Ukrainian authorities have barred men of fighting age from leaving the country during wartime. So instead he watched, in tears, as his sons, ages 11 and 3, boarded the bus with their mother while he stood on the street alone. “They need to go, it’s not safe here,” he said. “We agreed that this was the only option.”

When the bus pulled away, he followed it on foot as far as he could and held his face in his hands as the vehicle drove off into the distance. Through its windows, his boys looked inconsolable. Ukrainian cities scrambled to repair power plants and other infrastructure smashed by Russian bombs, and citizens grappled with sporadic power outages. Top U.S. and NATO officials said Wednesday that they were outraged by Russia’s “indiscriminate” attacks on civilians and that they were pushing to get Ukraine additional air defenses as quickly as possible

Denouncing the “malice and cruelty” of Russia’s recent escalation, Austin said there is strong will to get Ukrainian forces the weapons, ammunition and equipment on their wish list. “We’re going to do everything we can, as fast as we can, to help the Ukrainian forces get the capability they need to protect the Ukrainian people,” he said at a news conference at NATO headquarters.

But supplying advanced air defense systems to Ukraine and making sure they are operational is not a simple task, U.S. and NATO officials said.

Gen. Mark Milley, chairman of the Joint Chiefs of Staff, said getting Ukraine missile defense systems will be “quite complicated from a technical standpoint” and will “take a bit of time.”

“Ukraine is a big country, many cities,” Stoltenberg continued. “So we need to scale up to be able to help Ukraine defend even more cities and more territory against horrific Russian attacks.”

Zaporizhzhia has been among the hardest hit by missile strikes in recent days. The deadliest strike came in late September as civilians lined up to collect relatives from Russian-held territory. At least 30 people were killed and more than 80 wounded when three missiles landed around them.

But the attack sent a message across the line of control, as hundreds of Ukrainians learned the news while waiting to leave.

“It made the journey feel more dangerous,” said Alexandra, 33, who arrived in Zaporizhzhia late Wednesday after two weeks on the road.

Alexandra spoke on the condition that her last name be withheld for fear that her family could face reprisals from Russian forces. “My mother kept calling me, and she was begging us not to risk it,” she recalled. But Alexandra feared the risks of staying even more.

In Kherson, rumors swirled that the city’s men might be forced to join the fight against their Ukrainian countrymen, and Alexandra’s husband, Vladimir, worried that would mean him. As the family waited at the Vasylivka checkpoint, the last in Russian-held territory, they saw a Ukrainian man from the eastern Luhansk region turned away by Russian soldiers.

“They told him to go back to Luhansk and join their army,” Alexandra said. “We couldn’t stay there on land that Russians stole. To us, it felt morally reprehensible.”

The U.N. General Assembly on Wednesday overwhelmingly adopted a U.S.-sponsored resolution condemning Russia’s illegal annexation of territory and calling on Moscow to “immediately and unconditionally” reverse its annexation of Donetsk, Kherson, Luhansk and Zaporizhzhia.

The vote — 143-5, with 35 abstentions — was nearly identical to that on a resolution in March condemning the invasion of Ukraine. Four of the five countries opposed — Russia, North Korea, Belarus and Syria — were the same. Eritrea, which last time voted no, abstained this time, while Nicaragua did the opposite.

Speaking before the vote Wednesday, U.S. Ambassador Linda Thomas-Greenfield said the resolution was “important not just to the future of Ukraine and the future of Europe, but to the very foundations of this institution,” which, she said, was built on the idea “that never again would one country be allowed to take another’s territory by force.”

Meanwhile, Moscow’s security services announced the arrests of eight people — including five Russian citizens — in connection with an explosion that damaged the Crimean Bridge early Saturday.

In a statement, Russia’s security service, the FSB, accused Ukraine’s military intelligence service of coordinating what it called a “terrorist act.” The Ukrainian government has not claimed responsibility, though the bridge explosion was celebrated in Kyiv, and the Ukrainian Interior Ministry on Wednesday dismissed the FSB allegations as “nonsense.”

Rauhala reported from Brussels and Dixon from Riga, Latvia. The Washington Post’s Serhii Korolchuk in Zaporizhzhia, Leo Sands in London and Karen DeYoung in Washington contributed to this report.