Raymond Haddock, a former Army general who oversaw the missile system that protected Europe against Cold War Soviet threats and who was also the last U.S. military commander in West Berlin, died at age 86.

A resident of Spotsylvania, Va., Haddock was battling a serious illness at the time of his death on Oct. 3, which Germans observe as the holiday celebrating the reunification of the country.

The news of his death prompted sympathy and grateful memories in Germany, where he had maintained friendly contact over the decades.

Ralf Stumpf, who in 2014 created a small Cold War museum in the rooms of the old command post at the former Bismarck ​Kaserne in Schwaebisch-Gmuend, called Haddock “a true gentleman.” Haddock’s uniform is a centerpiece in the collection, Stumpf told Stars and Stripes.

Gmuend was once a garrison town and home to 4,000 American soldiers and their families. Haddock is remembered fondly by the townsfolk.

“He was the reason the German-American friendship existed here,” Stumpf said. “He truly cared about the people.”

An online memorial page in Haddock’s name drew more than 400 comments and reactions from family members, friends and former colleagues.

“Great man and great leader,” wrote Dale Nye, who served under Haddock in Schwaebisch-Gmuend. “I met him in the field and he made it known he had our back!”

As a major general, Haddock was part of the successful fielding of Pershing II missiles in Germany while serving as commander of the 56th Field Artillery Command, the garrison in Schwaebisch-Gemuend and its associated missile stations in Germany from 1984 through 1987.

Haddock was in charge of the intermediate range nuclear force at the height of tensions with the Soviet Union. The SS-20 missiles the Kremlin deployed had Europe in their crosshairs.

For years, protests and road blockades made front-page news in Germany. Additionally, the program incurred setbacks when accidents called public safety into question. 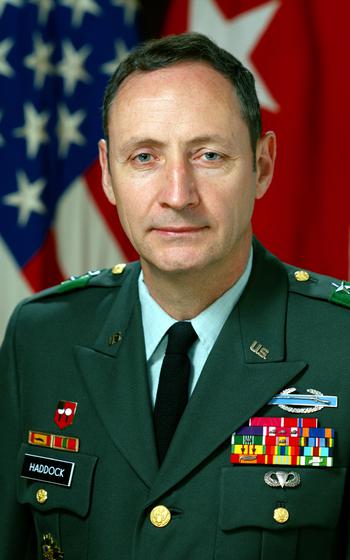 Led by the German-speaking Haddock, the command employed a public engagement policy to win support for his soldiers and Europe’s defense against a Soviet nuclear threat in Europe.

“The Soviet Union had always believed that they would be able to eject the system by popular opposition,” Haddock recalled in 1992. “However, they didn’t count on our ability to get out and win support of the people. But when we had won what I call the battle in the streets, the Soviets decided to change their tactics.”

A ban on intermediate-range nuclear weapons was signed by the U.S. and the Soviet Union in 1988, and all Pershing II and SS-20 missiles were destroyed by May 1991.

“Clearly, and perhaps more than any other single missile system, the successful deployment of Pershing II served to maintain for Europe the nuclear protection offered by the American strategic umbrella, strengthened NATO, united the political will of the United States and Germany,” Haddock wrote online in 2009.

Haddock’s skills were also relied upon during his tenure as the U.S. commander in Berlin from 1988 through the reunification of Germany in 1990. 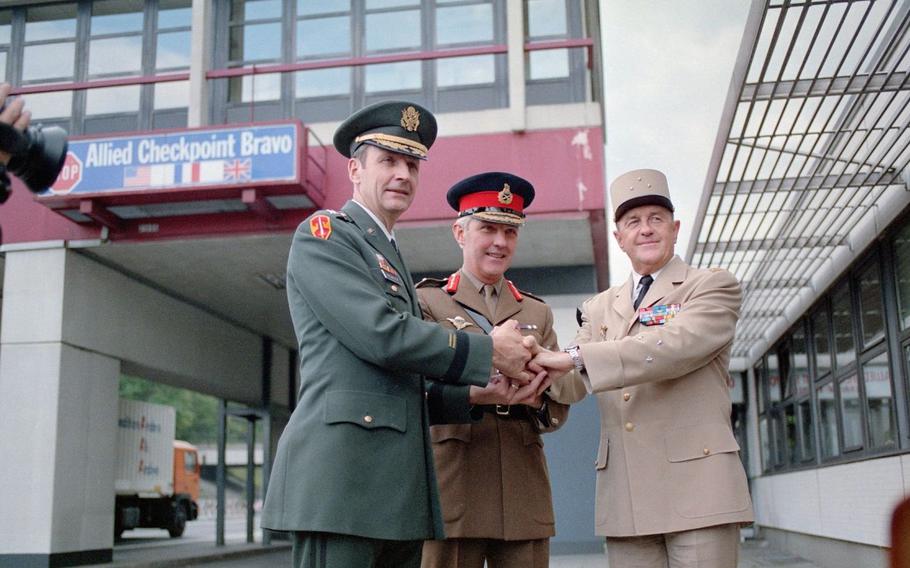 At a time when a so-called “death strip” still separated East and West, Haddock commanded up to 12,000 U.S. and allied service members as the first line of defense for West Berlin.

But as the senior American military official, Haddock also served a diplomatic role.

When demonstrations started to ramp up and East German border guards ceased to enforce emigration rules in 1989, Haddock and his wife were among the first to greet East Germans coming across to West Berlin.

“There was such a tremendous outpouring of enthusiasm on the western side as brothers and sisters, countrymen on the West went to greet their fellow citizens coming from the East,” Haddock recalled in 1992 on WTIX radio in New Orleans. “It was a wonderful experience.”

Under his watch, the U.S. closed one of the Cold War’s most famous frontline postings, Checkpoint Charlie. It was the only legal crossing point for U.S. service members and civilians traveling between East and West Berlin. 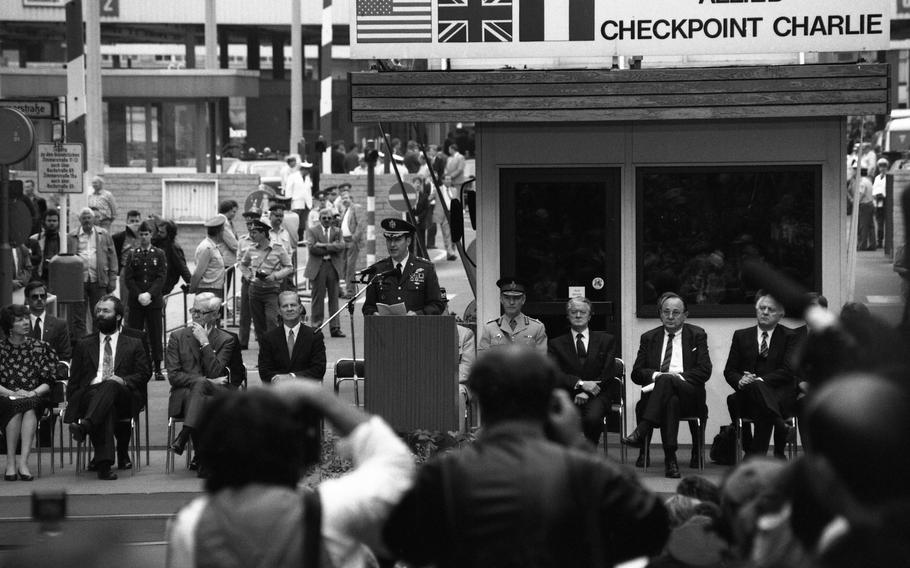 Maj. Gen. Raymond Haddock, U.S. commander for Berlin, speaks at the deactivation and removal ceremony for Checkpoint Charlie in Berlin on June 22, 1990. (Dave Didio/Stars and Stripes) 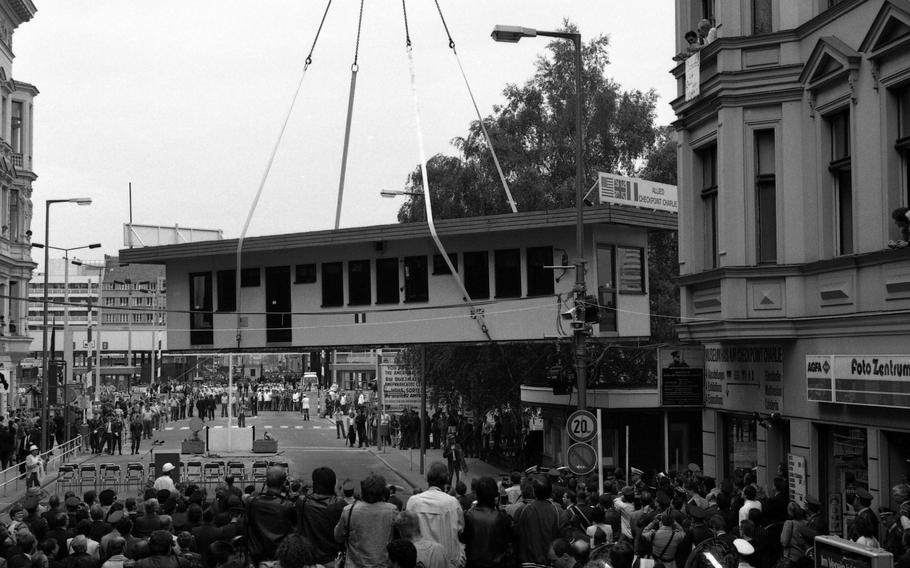 Checkpoint Charlie is lifted off its spot June 22, 1990, in Berlin. The checkpoint shack is now in the Allied Museum in the Dahlem neighborhood of Berlin. (Dave Didio/Stars and Stripes)

“For 45 years we stood firm on the front lines in Berlin,” Haddock said in 1992. “For 45 years there was one policy that said, ‘This we will defend.’ Berlin will be free and one day Germany would be united. We stood firm there … And we won. We won because of that long string of doing the right thing.”

Years later, Haddock said witnessing German reunification was one of the happiest days of his life.

Maj. Gen. Stephen Maranian, the current commanding general of the 56th Artillery Command, joined in the online tributes to Haddock.

“His legacy is intertwined with ours and I’m glad that he lived to see the day when the unit that he so loved was brought back into active duty in the U. S. Army,” Maranian wrote Oct. 7.

The command was reactivated Nov. 8, 2021, at Clay Kaserne in Wiesbaden amid renewed tension between Moscow and the West.

After launching his military career as the battalion commander of his ROTC unit at West Texas State University, Haddock went on to serve 34 years in the Army.

He is survived by Brunhilde Haddock, his wife of 62 years; a daughter; two sons and eight grandchildren. He will be interred at Arlington National Cemetery.