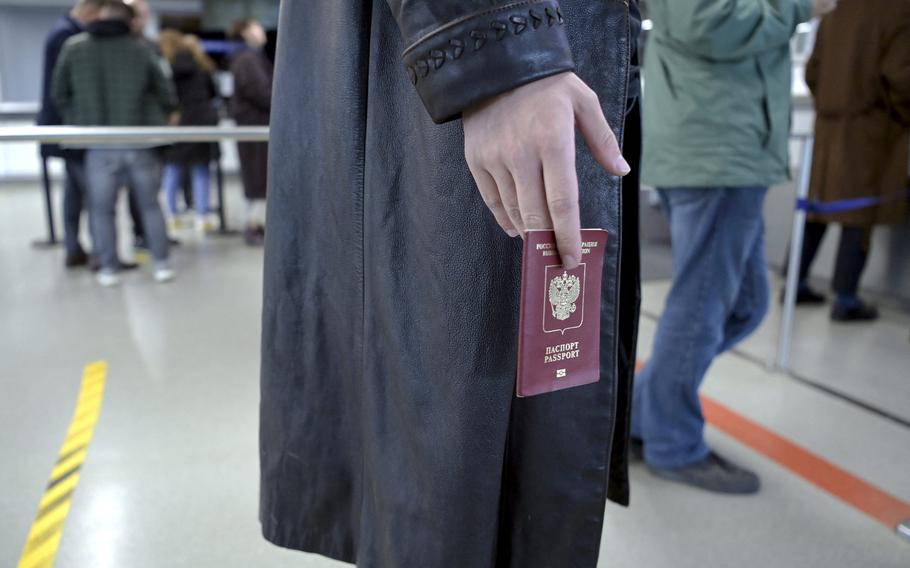 Ivan, 23, of Russia waits in a queue to have his passport checked at the Vaalimaa border checkpoint in Virolahti, Finland, on Sept. 25, 2022. (Jussi Nukari, Lehtikuva/AFP via Getty Images/TNS)

(Tribune News Service) — Far more Russians have fled abroad than have enlisted in the military since President Vladimir Putin announced a mobilization to bolster his faltering invasion of Ukraine.

That matches an exodus of more than 200,000 Russians to neighboring Kazakhstan alone over the same period reported Tuesday by the central Asian country’s interior minister. Almost 69,000 Russians crossed into Georgia by Sept. 30, according to Interior Ministry data in the Caucasus republic, where vast lines of vehicles built up at the land border with Russia following the mobilization announcement.

The European Union reported last week that 66,000 Russians had entered the bloc in the week to Sept. 25. Most came through Finland, which heavily restricted Russian tourist arrivals on Friday in response to the surge in entrants.

In Mongolia, which this week offered to ease residency rules for people from Russia, border officials reported that more than 12,000 Russians entered the country by Oct. 2.

Other popular destinations such as Turkey, Armenia and Azerbaijan, where Russians can enter visa-free, haven’t disclosed data on arrivals since Putin’s mobilization order shocked the country and brought home the reality of the war in Ukraine that’s now in its eighth month.

While not everyone who’s left Russia since Putin’s mobilization order would have been eligible for conscription, many rushed to get out of the country amid widespread uncertainty about the terms of the call-up. After Shoigu said 300,000 reservists were being mobilized, reports piled up of men being drafted who were officially exempt, including those who were too old or had chronic illnesses.

Social media also filled with complaints from some conscripts about dire living conditions and a lack of training and equipment before being sent to the front.

That all prompted a demand from Putin to “promptly correct our mistakes and not repeat them” at a meeting with his Security Council on Sept. 29. “Those who have been drafted without proper grounds must be sent home,” he said.