Their loved ones are Ukrainian medics — and Russian prisoners of war 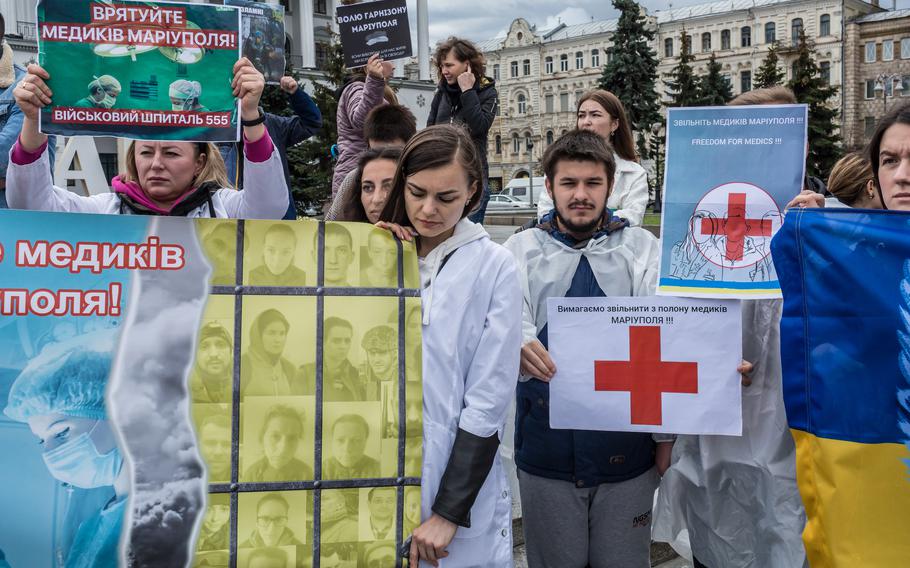 Family members of military medics taken prisoners by Russia participate in the larger demonstration of family members of prisoners demanding their release on the Independence Square in Kyiv on Sept. 24, 2022. (Oksana Parafeniuk/for The Washington Post)

KYIV, Ukraine — Medic Maryana Mamonova was taken prisoner in Mariupol this spring as Russian forces laid waste to the city. Late last month, she and several other medical workers were among the 215 Ukrainians swapped for 55 Russians in the largest such exchange of the war. Four days after her release, she gave birth.

Stories like hers only added to the country’s celebrations over the return of so many Ukrainians, men and women who were captured as the invading troops tried to overrun cities and towns across the east. Yet others continue to be held, their location and health uncertain. At least 150 are medics, according to some accounts, and many are from the 555th military hospital in Mariupol.

The Washington Post spoke to relatives of some of these medics, who, as Russian forces were bombing that city, sought refuge with local residents in its sprawling Azovstal and Ilyich steel plants. Their capture violated the Geneva Conventions, which specify that “personnel engaged exclusively in the collection, transport and treatment of the wounded and sick” should be “respected and protected under all circumstances.”

“If they fall into the hands of the enemy, they shall not be treated as prisoners of war,” the conventions read.

The opposite happened, though. And no one knows how Russia’s illegal annexations Friday of four Ukrainian territories will affect the medics’ fate. Maryana Zhahlo, 52, pours tea for her 12-year-old son Lev at home in Kyiv, Ukraine on Jan. 23, 2022. Maryana, a mother of three, marketing analyst, joined the 130th territorial defense battalion and last spring when there was a threat of a full-scale Russian invasion, bought the rifle and attended the sniper school course. The Territorial Defence Units are part of the Armed Forces of Ukraine and consist of people, who mostly also have regular jobs that they do during a week. (Oksana Parafeniuk/for The Washington Post)

‘They have taken our lives’

After she heard about the prisoner of war exchange on Sept. 21, Svitlana Harlinskaya was “waiting every second” for her older sister to call and say, “I’ve been freed.”

But the phone never rang. Olena Biiovska, 49, wasn’t among those released.

“You understand hopelessness, and you want to shout to the whole world,” Harlinskaya said.

Her sister had worked as a military medic for 18 years, serving in Kyiv and on the front in the east. Six months before the fighting broke out, Harlinskaya said, she was transferred to the 555th hospital in Mariupol.

Once Russia invaded, communications with Biiovska were sporadic. When a bomb destroyed the hospital, she and other medics moved to the Ilyich steel plant.

Sometimes she would send text messages or call with seconds-only messages. “She said, ‘I’m alive, I love you, I’m running to operate,’” Harlinskaya recounted recently. One call finally lasted a few minutes. “She said that there were so many wounded, all with serious injuries. She said it was unbearable.”

In mid-April, Russian forces broke through Ukrainian defenses at the Ilyich plant and took the troops and medical personnel prisoner. Biiovska’s last text message was that day. After that, nothing.

Her family knew through contacts that she was a prisoner. A photo of Biiovska and other medics showed up on a Russian Telegram channel. “She was very thin,” Harlinskaya said. At the end of August, the Red Cross delivered a letter that Biiovska had written two months earlier.

Biiovska’s two sons, ages 19 and 21, now live with their aunt. “They ask me every day when their mother will come home,” Harlinskaya said.

Her anguish comes through when she talks about the Russians: “They have taken our lives and the lives of our loved ones.” Alona Koval’s younger sister, Maryna Golinko, is a medic and first lieutenant with the Ukrainian 36th brigade. She was transferred last November from Kyiv to Mariupol, where the start of the war meant a very different mission, evacuating and treating soldiers from the battlefield. “It was frightening,” Koval said.

The brigade was in the bunkers below the Ilyich steel plant for the final weeks before the city’s fall. In one of Golinko’s last text messages to her sister before being taking prisoner by Russian soldiers, she described the destruction around her and large numbers of dead and wounded.

“I can’t describe it all. I sit and cry,” wrote Golinko, 28. “The last day I’ve felt such fear and despair, and desire to live like no time before in my life.” In a separate text to her mother, she wrote that it might be her last message and that it made no sense to search for her body.

Then followed what Koval remembers as “horrible days” when the family didn’t know where Golinko was. They finally spotted her in that same photo on the Russian Telegram channel, and they also received a Red Cross-relayed letter in late August. Golinko wrote that she was eating three meals a day and being treated well.

Koval didn’t believe a word, though she “wanted it to be true.” Her fears were confirmed by one of the medics who was freed last month, who said her sister and others were being held in horrible conditions in Russia and regularly beaten.

Just days later, Koval was at Kyiv’s Independence Square as dozens of relatives of Ukrainian prisoners of war gathered. She held a little teddy bear, a treasured reminder of her sister as she helped demonstrate for the prisoners’ release.

“Maryna wanted to be a medic since she was 5. This was her first patient,” Koval explained. “We take care of him now because he’s so important to us.”

At least Yurik Mkrtchian’s family knows where he was taken after being captured at the Ilyich steel works. And at least they know he survived the explosion that in July killed 53 Ukrainians and wounded 75 at the Olenivka prisoner of war camp in Russian-controlled territory in the east.

Mkrtchian, a 31-year-old anesthesiologist, managed a brief call to his sister Karina the day after the blast.

‘I’m alive, here, and in the same condition,” he told her.

About a month later, he sent a letter that he signed “a military doctor.”

“Today is one month in captivity and the words, ‘be glad you’re alive,’ begin to ring tensely in my head,” he wrote. “I demand only one thing: freedom for me and my work.”

His mother longs for her son to be released. Maryna Mkrtchian says she felt “joy” that so many others were part of the prisoner swap and came up with her own explanation as to why Yurik was not among them.

“He must be still needed,” she said. “There are still prisoners, there are wounded. I can’t despair and cry and scream - and not be happy that [another] mother can now hug her son or her daughter.”

Olha Shapkova, 28, poses for a portrait with her son near their home in Kyiv, Ukraine on Sept. 25, 2022. Olha's husband Volodymyr is a military medic and is held prisoner supposedly in Olenivka. (Oksana Parafeniuk/for The Washington Post) Olha Shapkova, 28, shows photos from the marriage with her husband military medic Volodymyr Shapko, who has been prisoner, in Kyiv on Sept. 25, 2022. Olha's husband Volodymyr is a military medic and is held prisoner supposedly in Olenivka. (Oksana Parafeniuk/for The Washington Post)

Olha Shapkova and Volodymyr Shapkov met while studying at the Kyiv military academy, and both were stationed in Mariupol before the war. She returned to the capital to give birth to their first child, Yevgeny, in December. Her husband, a surgeon, followed for his son’s arrival.

“He came to us for a few days and then went back,” Shapkova said. “I planned to join him, but I didn’t make it in time.”

They spoke by phone at the beginning of March. Silence followed for months, and as the crisis in Mariupol worsened, she feared he might have been taken prisoner: “I monitored the internet, all the Russian Telegram channels, everything I could. But I didn’t want to believe it, of course, because it’s scary.”

In early June, Shapkov called from an unknown number and said he was being held in the Olenivka camp. The deadly explosion there was July 29.

“I didn’t sleep all night,” she said. “I’m a breastfeeding mother. I have to feed the baby. Everything is transferred to the child, all the nerves. He, too, does not sleep, cries, feels everything.”

When Russia finally put out a list of the dead, 28-year-old Volodymyr Shapkov’s name wasn’t on it.

His wife last got a glimpse of him in June when the Russians released two videos of medics they were holding. He was “frighteningly thin,” she said, but she still was relieved. “He had two legs and two arms — thank God.”