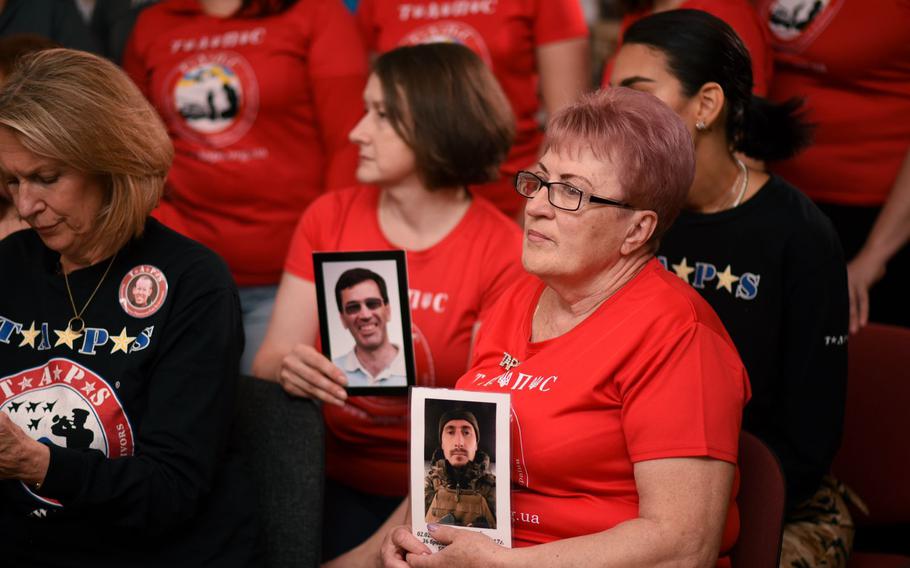 Workers in Dnipro, Ukraine at the headquarters of TAPS-Ukraine hold up photos of family members they've lost since the Russian invasions in 2014 and in February this year. Bonnie Carroll, president of the military survivors' resource TAPS, is on the left. She was in Ukraine during a 10-day visit. (Tragedy Assistance Program For Survivors)

Bonnie Carroll was making her first trip to Ukraine since the Russian invasion in February when she was invited to a funeral by a woman she’d met years earlier.

Carroll had grieved with Zinaida Voronova after her son, Sergey, was killed in 2014 fighting the Russians near Donetsk. Now, Voronova was grieving the loss of her last living son, Aleksandr, who was killed while fighting in the Donbas region.

They gathered in Dnipro, a city of about 1 million in southeast Ukraine.

With the sound of shelling in the distance, Carroll watched as Voronova mourned and the tearful pallbearers, the young man’s comrades in arms, lowered him into his grave. Carroll reached out to his weeping mother.

“We held each other, and without a common language other than grief, our hearts were one,” Carroll wrote in her journal. 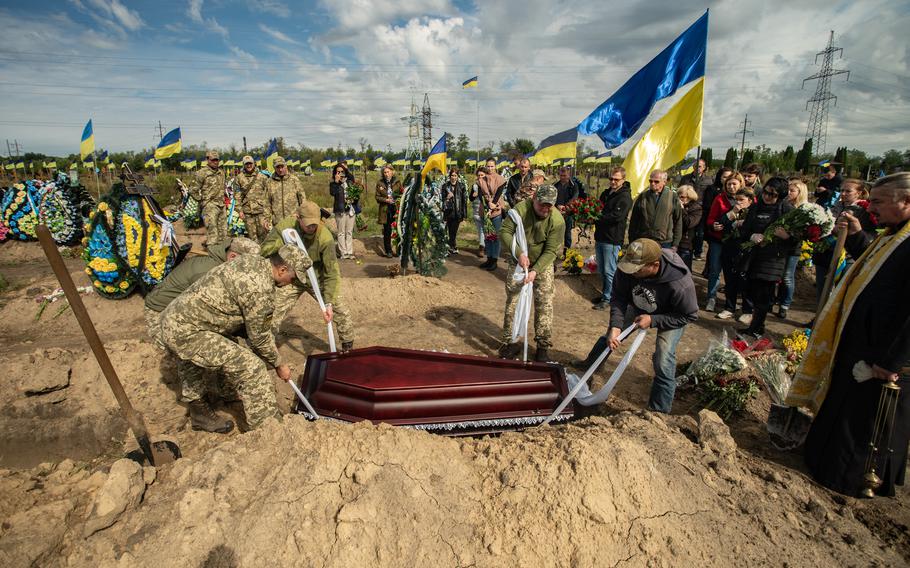 Ukrainian soldiers lower the casket of a fallen service member into a grave in Dnipro, Ukraine, Sept. 20, 2022. (Ivan Troyakov) 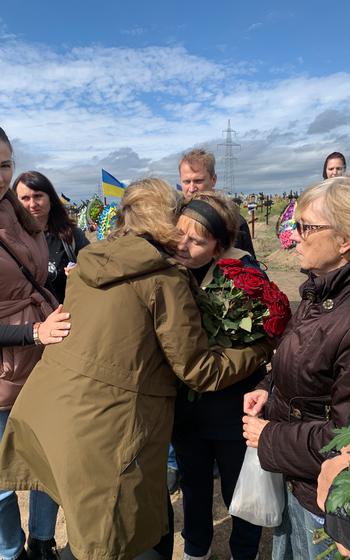 Bonnie Carroll, who since 2014 has helped with services for devastated survivors of war in Ukraine, hugs Zinaida Voronova, a woman who lost her two sons in war initiated by Russia, at her last surviving son’s funeral in Dnipro in September 2022. (Tragedy Assistance Program For Survivors)

Grief transcends borders, Carroll said in a video call after completing her 10-day visit to Ukraine. “We all grieve the same. The love lives on, and we’ll continue to honor our heroes. There’s no difference in our grief and our love and our pride,” she said.

Carroll is an expert on all three. She’s a former military officer and staffer in the Reagan and George H.W. Bush White Houses who spent a year working in Baghdad, advised the Department of Veterans Affairs, and was awarded the Presidential Medal of Freedom by President Barack Obama in 2015.

She founded the Tragedy Assistance Program for Survivors in 1994, two years after her husband, Army Brig. Gen. Tom Carroll, was killed in a plane crash in Alaska, where his family had deep roots and Carroll lives half the year.

Based in Arlington, Va., where Carroll lives when not in Alaska, TAPS provides care, casework assistance, emotional support, peer counseling and more for anyone needing help after the death of a military loved one. Last year, the nonprofit connected with more than 9,246 newly bereaved people, adding to the nearly 100,000 military survivors already receiving support from TAPS, according to the organization.

In 2014, after Russia annexed Crimea and the war in Donbas began, the U.S. State Department reached out to Carroll to mentor people in forming a similar organization for the people of Ukraine.

“At that moment, our friendship started,” said TAPS Ukraine’s international partnership coordinator Nataliya Chernyshova, speaking on a video call from the group’s Dnipro headquarters. “We followed her way and copied her model.”

By 2017, after thousands of Ukrainians had been killed in the country’s east during conflicts with Russian-backed separatists, the organization was up and running. Now it boasts some 1,450 volunteers working out of a block-long building in Dnipro, a key logistical and humanitarian hub for Ukraine since Russian President Vladimir Putin launched a large-scale invasion Feb. 24. 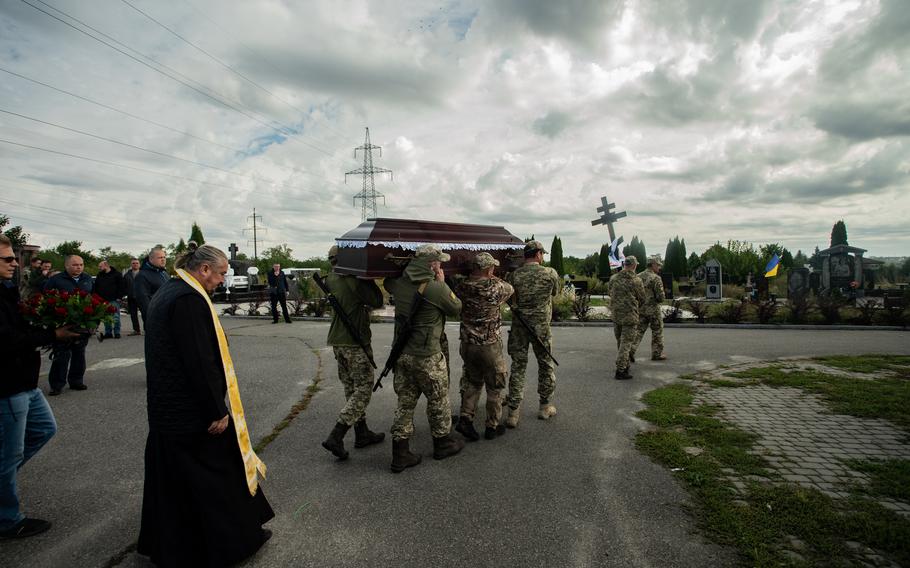 Ukrainian soldiers carry the casket of a fallen service member on their shoulders in Dnipro, Ukraine, Sept. 20, 2022. (Ivan Troyakov) Since then, thousands of Ukrainian fighters have been killed. Nearly 6,000 civilians have died and another 9,000 have been injured due to the Russian invasion, according to United Nations figures.

Russia stands accused by the U.N. and human rights groups of numerous war crimes and atrocities.

“People cannot accept this in the 21st century, ‘‘ Chernyshova said.

Among the TAPS Ukraine clients is a woman who fled the fighting after her husband was killed and her son joined the Army.

“She found a home in Dnipro. She is a widow. She is a refugee,” Chernyshova said.  “Sometimes we have very complicated situations.”

Carroll sat in on sessions in which people spoke of their grief and fears of living in a war zone. She also visited a hospital for wounded soldiers and was awed there by the “Wall of Heroes,” photographic tributes to the fallen, both for Ukrainian and foreign fighters.

“The country is so profoundly affected by loss. Loss touches everyone,” she said. “But we always say the love will go on. That’s important to hear.”

The Ukraine group does many of the same things as its sister organization in the U.S., including offering counseling, with access to some 60 psychologists to help people work through their feelings of shock, grief, loss and war trauma.

It also has stockpiles of medicines and other supplies, conducts medical evacuations and at one point was making Molotov cocktails after Ukraine’s deputy defense minister called on citizens to make the homemade weapons and join the fight.

But she and Chernyshova said that they have not gotten used to living in a war zone.

“Every day we hope it will soon be finished,” Chernyshova said.  “People here don’t watch films, they only watch the news.” 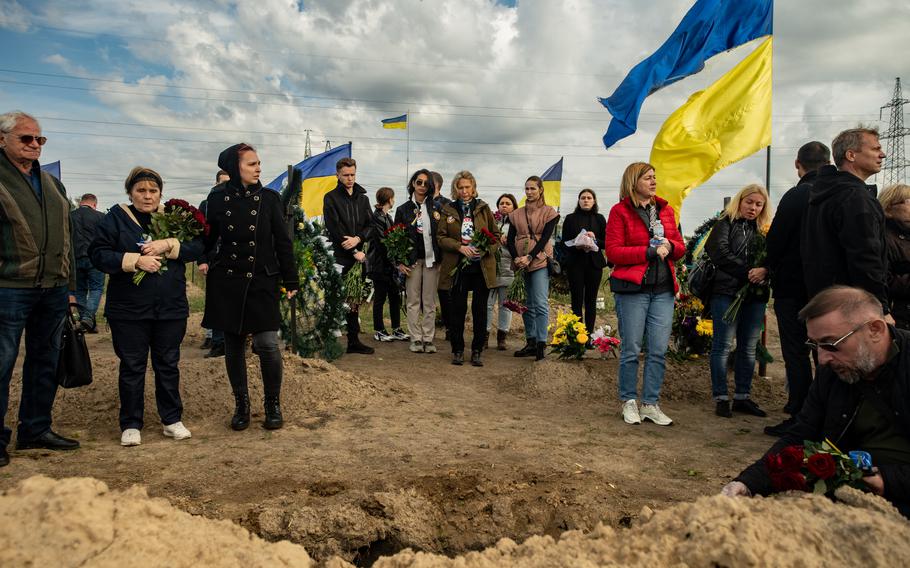 Ukrainian family members and friends attend the funeral of a soldier in the city of Dnipro. He was killed during fighting against invading troops from Russia, Sept. 20, 2022. (Ivan Troyakov) 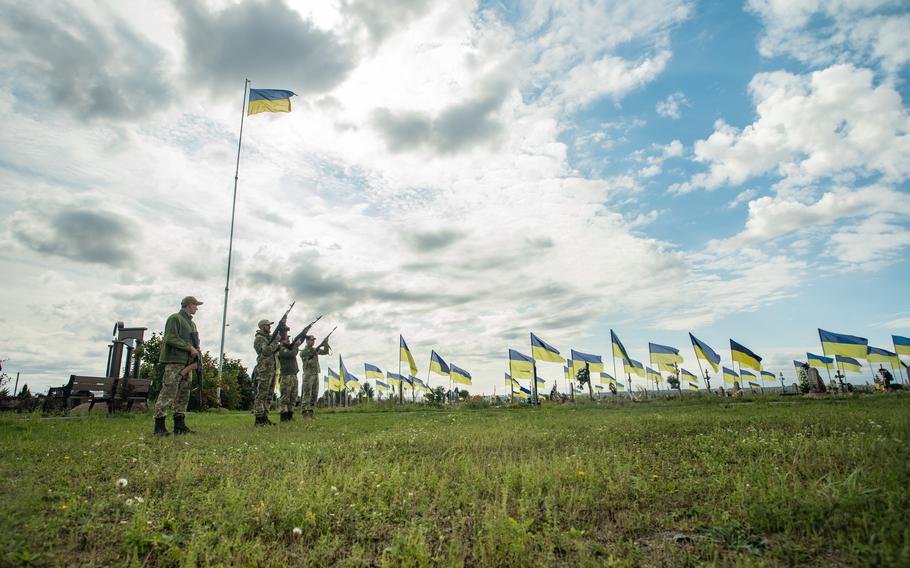