Tucker Carlson conjectures that US behind alleged Nord Stream sabotage 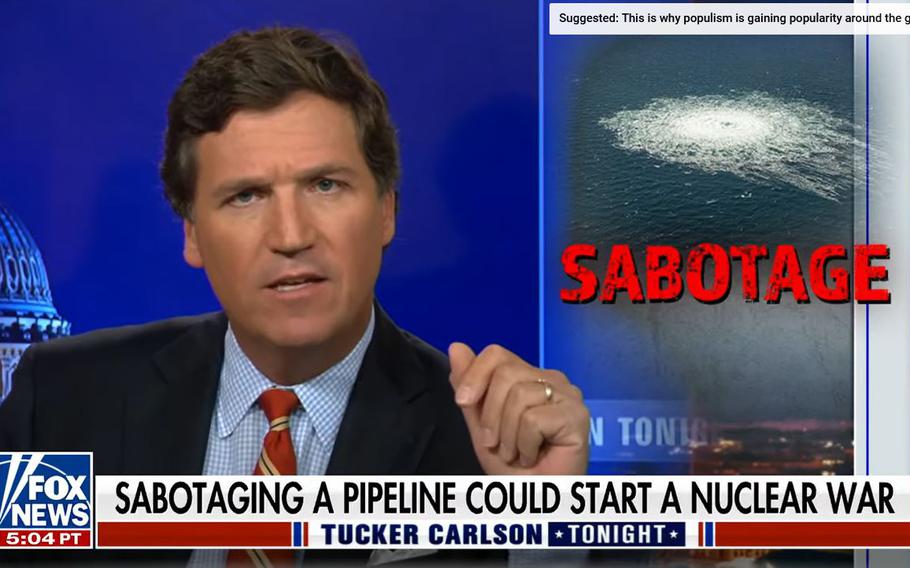 Fox News host Tucker Carlson's long-running quest to blame the Biden administration for the war in Ukraine hasn't borne much fruit, despite his prominent perch on the most-watched cable news channel.

But it's not for lack of trying. And on Tuesday night, Carlson strongly suggested the United States is responsible for explosions that damaged the Nord Stream pipelines - and, at times, seemed to more explicitly blame it.

We know very little about what happened to the pipelines, which carry natural gas from Russia to Europe, or who was responsible if the explosions were due to sabotage, which authorities say is likely. Anything seems possible at this point.

But Carlson's supposed evidence for this being a U.S. operation is decidedly weak.

Carlson began his monologue by seeking to knock down the idea that Russia itself could have been responsible, which is the theory favored by some Western leaders. (Russia has denied responsibility.) He argued that cutting off its ability to supply energy to Europe would deprive it of leverage. "If you are Vladimir Putin, you would have to be a suicidal moron to blow up your own energy pipeline," Carlson argued. "That's the one thing you would never do."

Nonetheless, Carlson continued, that's where some people are pointing. "The Washington Post got right to it," Carlson said. "Putin, they declared, is now weaponizing the Nord Stream pipelines."

In fact, the piece he cited was an analysis from Bloomberg News, which The Washington Post also ran on its website. And the piece didn't outright say Putin had done this; it only raised the possibility. "Is Putin Fully Weaponizing the Nord Stream Pipelines?" the headline reads. That is a question, not an assertion of fact.

But it wasn't the only source for Carlson's theory that wasn't entitled to nuance.

Perhaps the most prominent quote Carlson used was from President Biden in February: Biden had said that, if Russia invades Ukraine, "there will be no longer a Nord Stream 2. We will bring an end to it."

Carlson treated this as no less than a smoking gun. He cast Biden's comments as him saying "that he might take out these pipelines." Despite often casting Biden as a doddering old fool, Carlson assured that, in this instance, the president must have chosen his words carefully: "He said there won't be a Nord Stream 2. We'll put an end to it. We will take it out. We will blow it up."

You begin to see the rhetorical trick here. Biden did not say we would "blow it up," unless you're using that phrase metaphorically. (At the time, the pipeline's construction was complete but it was not operational, awaiting approval from Germany and the European Union; a few weeks later, German Chancellor Olaf Scholz said Berlin would stop the pipeline's certification.) But Carlson's aim is clearly to make people think about it literally.

Carlson then turned to another Biden administration official who he suggested publicly previewed just such a potential strike. It was top State Department official Victoria Nuland, who said in January, "If Russia invades Ukraine, one way or another, Nord Stream 2 will not move forward."

Carlson highlighted the "one way or another" as being a potential threat to use sabotage - similar to Biden's "bring an end to it."

But there is a very readily available, alternate explanation for these veiled and unspecific promises to halt Nord Stream 2: The fact that it wasn't at all clear how the United States could actually achieve its goal of shutting it down if Russia invaded. After all, Europe would be giving up a key energy source, and the decision largely rested with Germany.

Indeed, we wrote about exactly that just a day after Biden's February comments. The administration kept saying it would halt Nord Stream 2, but Germany was publicly noncommittal. Harder commitments might have been made behind closed doors, but this was sensitive diplomacy that made it difficult for the Biden administration to say exactly how it would make good on its promise (which it ultimately did).

Beyond that, there are plenty of reasons to be skeptical of the notion of the United States conducting sabotage. High on that list is that such an action would strain relations with European allies who would like to have access to that pipeline at some future date, even as they're currently forgoing Russian energy in solidarity with Ukraine. (An official told The Post's John Hudson that the idea of U.S. involvement in the attack on the pipeline is "preposterous.")

The last source Carlson cited was not a U.S. politician, but a European one. Radek Sikorski is a member of European Parliament representing Poland and is the country's former defense and foreign minister. His Twitter account on Tuesday featured a photo of gas bubbling up to the top of the Baltic Sea, with the brief message: "Thank you, USA."

Some reports cast Sikorski's comments as explicitly blaming the United States for sabotage, and some Polish politicians suggested Sikorski was furthering Russian propaganda efforts. Prominent Russian officials promoted Sikorski's tweet, but Sikorski is not known as a pro-Russian politician.

But his meaning wasn't entirely clear; it seems possible he was crediting the United States for rendering the pipelines moot by pressuring Europe not to take Russian natural gas. In later tweets, he seemed to actually point the finger to Russian sabotage, citing a supposed Russian "special maintenance operation" on the pipelines.

(The Washington Post attempted to contact Sikorski through the Center for Strategic and International Studies, where he holds a nonresident position, but hasn't received comment from him.)

This is effectively the totality of the supposed hard evidence Carlson had for his theory. Beyond that, it was rank speculation and evaluating the various motives involved - motives which Carlson has long claimed, on the Biden's administration's side, include exacerbating the war in Ukraine.

He repeatedly qualified his comments by saying things like, "We don't know for sure." But ultimately he delivered his speculation as if it were fact and invited his viewers to do the same.

"What will be the effect of this? Every action has a reaction, equal and opposite. Blow up the Nord Stream pipelines? Okay, we've entered a new phase, one in which the United States is directly at war with the largest nuclear power in the world," Carlson said. "It doesn't mean it will go nuclear immediately, but it does suggest there could be consequences."

He added: "Have the people behind this - the geniuses like Toria Nuland - considered the effects? Maybe they have. Maybe that was the point."

Carlson then invited his guest, former congresswoman Tulsi Gabbard (D-Hawaii), to join in the speculation. But despite Gabbard's record of more sympathetic comments toward Russia than your average U.S. politician and her skepticism of U.S. foreign policy, she wasn't going there.

"I don't have the evidence of who was responsible for this," Gabbard, before proceeding to speak more generally about the dangers of the situation.

Apparently even she wasn't swayed by Carlson's presentation.