Why Germany, US stalling on modern tanks for Ukraine 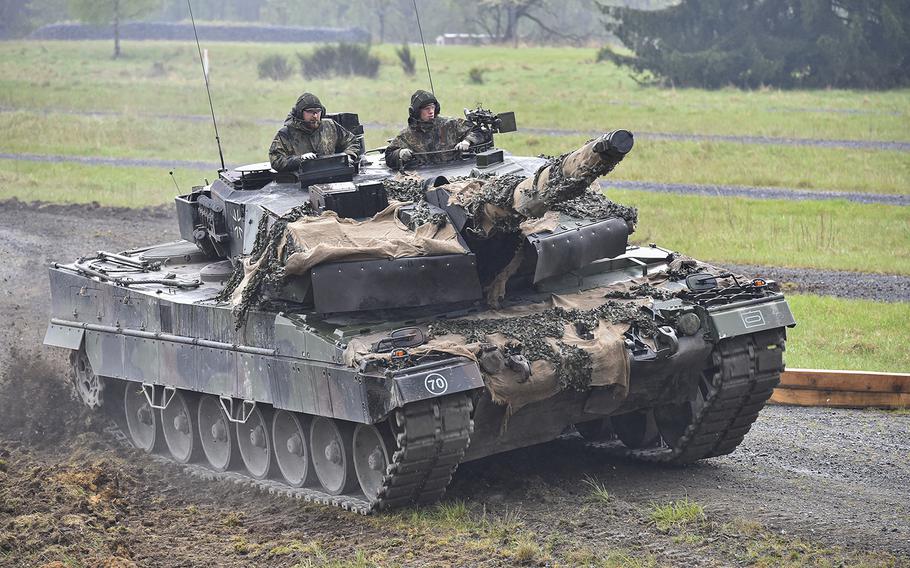 The U.S. and Germany remain stuck on efforts to send battle tanks to Ukraine, as officials contend with logistical issues and Europe's own defensive requirements, along with concern about escalating tensions with Russia, according to people familiar with the discussions.

Ukraine's allies have held talks at various levels in recent weeks on whether to send NATO-standard battle tanks -- such as Abrams and Leopards -- to Ukraine, but even as Kyiv's calls for such weapons come with greater urgency, no decision has been taken, the people said, asking not to be identified discussing sensitive matters.

Providing Kyiv with modern battle tanks would necessitate long-term training, maintenance and support, a U.S. State Department spokesperson said. The international effort to supply Ukraine is focused on sending weapons the country can use quickly and effectively, the official added.

A White House official has previously pushed back against the Ukrainian viewpoint that the U.S. is reluctant to send American-made tanks out of concerns that Russian President Vladimir Putin might escalate the conflict.

From the European side, allies have a limited number of modern tanks and are loath to leave the North Atlantic Treaty Organization unarmed in light of the tensions with Russia.

German officials raise similar concerns about training and maintenance with regard to their Leopard tanks, although these are less severe and could at some point be resolved, one person said. Ukraine's requests are focused on older variants of the modern tanks, which would lessen any risk of inadvertent technology transfers to Russia if they were captured and would have fewer requirements for training and repair.

Still, Chancellor Olaf Scholz is unlikely to push ahead unilaterally and give the green light to give Leopards to Ukraine without similar moves by the U.S. and other NATO allies, another person said. A government spokesperson declined to comment and instead pointed to Scholz's earlier remarks on the topic. 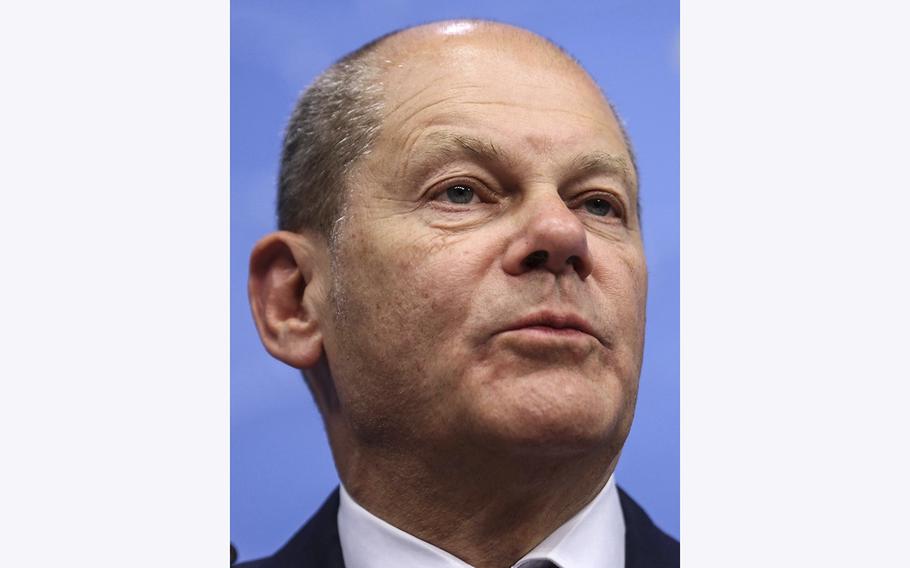 German Chancellor Olaf Scholz attends a briefing at the European Council headquarters in Brussels on May 31, 2022. (Valeria Mongelli/Bloomberg )

Scholz has repeatedly spoken of his concern about the risk that Russia's war in Ukraine broadens, especially with Putin moving to mobilize reservist troops and threatening the use of nuclear weapons to defend what he deems to be Moscow's territory. Scholz reiterated that stance in an interview with the New York Times published Sunday, saying it was "a very dangerous war" when asked why his country wouldn't send battle tanks to Ukraine.

Russian actions could always change those calculations. The European Union's foreign policy chief, Josep Borrell, said Wednesday that the gas leaks in the Baltic Sea were caused by deliberate damage to the Nord Stream 1 and 2 pipelines, which are majority and fully-owned by Russian state-owned company Gazprom respectively. Borrell warned this would be met with "a robust and united response."

Ukraine has been pleading with its allies to help it move beyond the Soviet-era equipment allies have been sending so far. Instead, Kyiv wants the more powerful NATO-standard tanks, fighter jets and longer-range missile systems it says it needs to preserve the advantage in a counteroffensive that has seen it retake territory in the east. Russia has burned through a large array of equipment in its invasion so far, but Ukraine has also lost tanks and planes, and Soviet-era tanks are in increasingly scarce supply around the world.

The U.S. is leaning on Germany to do more. In an interview earlier in September with German broadcaster ZDF, U.S. Ambassador to Germany Amy Gutmann said she "welcomed and admired" the support Germany has offered Ukraine but added "my expectations are even higher."

Yuriy Sak, an adviser to Ukraine's defense minister, said modern tanks are "way more effective on the battlefield compared to Soviet tanks, including due to ergonomics, range and accuracy of shooting as well as better protecting personnel."

Speaking in an interview with Bloomberg, Sak added they would be easier to repair with more readily available ammunition, compared to the Soviet tanks. Sak said Ukraine needs around 200 tanks to be effective on the battlefield at this stage, and could gradually replace Soviet versions with modern ones.

After European officials on Tuesday blamed the pipeline damage on an act of sabotage, Mykhailo Podolyak, an adviser to the Ukrainian president's chief of staff, said on Twitter "the best response and security investment" were tanks for Ukraine, adding "especially German ones."

NATO countries in April agreed to start sending Ukraine more modern, alliance-standard equipment to replace Soviet-era arms as stocks already started to wane and they have since started training Ukrainian forces on those weapons. But they've been reluctant to supply battle tanks and infantry-fighting vehicles. And while Ukraine's military has grabbed dozens of tanks left by fleeing Russian troops in the east, according to people familiar with the matter, it's unclear how many of those are operational or able to be repaired.

"The longer the war takes, the more empty our Soviet tanks stockpile will be and there will be that moment where we need to either deliver western-designed tanks to Ukraine or basically throw them under the bus. It's a matter of time," said Jana Puglierin, head of the European Council on Foreign Relations in Berlin. Given it takes around four months to train soldiers on the tanks, it is better to start now before the Soviet tanks completely run out, she said.

One option could include the U.S. backfilling Germany with Abrams tanks if Berlin sent Leopards to Ukraine, a European official said, but it's unclear how seriously that option is being considered. A spokesperson for the German defense ministry said they weren't aware of such a proposal. A person familiar with the matter added that integrating Abrams battle tanks into the German army would be a "logistical nightmare" given the different technology, training and fuel needs.

Around a dozen European countries, including Spain, Greece and Poland, use Leopard tanks but would need Germany's clearance to send them to a conflict zone. Even if some arrangement could be found, it is highly unlikely Ukraine will get modern tanks in the hundreds it has been asking for, one of the people said.

In a proposal published by the ECFR think tank in early September, Puglierin along with Gustav Gressel and Rafael Loss called on Germany to form a consortium with other European allies to send Ukraine around 90 Leopard 2 tanks. The tanks should be older variants so as not unintentionally give Russia insight into the most modern technology if captured, Puglierin said.

The proposal doesn't appear to have gathered traction in Berlin. A government spokesperson declined to comment and underlined Scholz's earlier remarks that Germany would refrain from any go-it-alone decisions when it comes to tank deliveries to Ukraine.

More immediately, Ukraine could instead get other heavy weapons from Germany, such as infantry fighting vehicles and armored personnel carriers, one person said.

Germany could also arrange more swap deals. In August it agreed to backfill Slovakia with 15 Leopard 2 A4 battle tanks after the eastern nation pledged to send more Soviet era tanks to Ukraine. Such deals since the war broke out have seen Ukraine receive more than 120 Soviet-style tanks and armored personnel carriers.