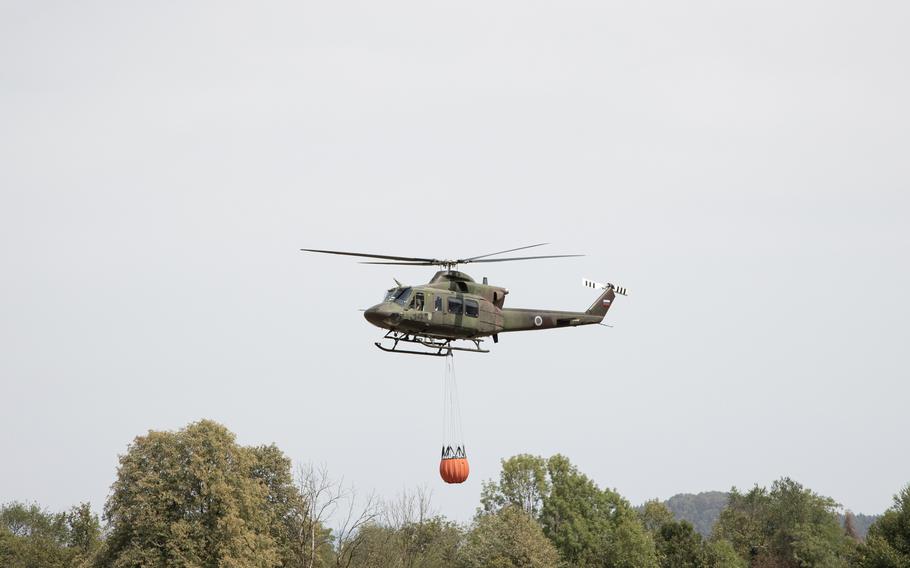 A Slovenian Army helicopter carries water with a bambi bucket to the wildfire near Debni Vrh in Ljubljana, Slovenia, on Aug. 18, 2022. (Špela Škulj/for The Washington Post)

KOSTANJEVICA NA KRASU, Slovenia — The wildfire was exploding across Slovenia’s dry mountainsides, burning up pine trees and blotting out both the sun and the ground. Lieutenant Colonel Aleš Ogrinc needed to call on all his military training as he steered his combat helicopter toward the flames to drop a payload of water.

In his 30-year career, he had deployed to Bosnia and Kosovo. This time the enemy was Slovenia’s largest-ever blaze, during the hottest European summer on record.

“You have different motivations,” Ogrinc said. “If you’re in Afghanistan or Iraq, that’s a common goal, but here you are fighting for your home, for your country.”

European militaries are fighting fires this summer that are burning with ever greater scope and intensity, battling record blazes across a continent that is also seized by war in Ukraine and the need to defend against an increasingly dangerous Kremlin. From the high cliffs of Portugal to the stony mountains of Greece, militaries have been the wildfire responders of last resort, bringing air resources and logistical capabilities that far outmuscle their civilian counterparts.

The twin problem — the war in Ukraine and natural disasters tied to global warming — underscores how climate change can weaken social stability, even when challenges at first glance appear unrelated. Russian President Vladimir Putin’s war in Ukraine is making it harder for European militaries to fight wildfires — and the worsening wildfires are making it harder for the militaries to respond to the Kremlin.

“In this situation with Ukraine and wildfires, we are in a dilemma how to balance,” Major General Robert Glavaš, the commander of Slovenia’s military forces, said in an interview. “At one point you need to decide what is important, this or that.”

The challenge is also increasing in the United States, where National Guard members devoted more than 172,000 personnel days to fighting fires last year, compared to 18,000 in 2019, according to U.S. Army figures.

But the task is especially pressing in Europe, where militaries shrank for years following the breakup of the Soviet Union. Now they are scrambling to expand to counter the threat of a possible Russian invasion and to rush aid to Ukraine to keep it in the fight. Some generals say that in a warming world, militaries will increasingly have to go beyond their traditional combat-focused operations to face climate-driven demands, such as responding to fires and floods.

“The role of the military will not just be about fighting future enemies, but also about supporting civil authorities in dealing with the effects of climate change,” said Tom Middendorp, a former top commander of the Dutch military who is now chairman of the International Military Council on Climate and Security, a research group that focuses on the security consequences of global warming. Boris Budal, Deputy Commander of the Sežana firefighters, standing near the trucks that were used in fighting the wildfires. (Špela Škulj/for The Washington Post)

Slovenian defense leaders decided this month to cancel a $343 million purchase of armored troop carriers as they contemplate buying more aircraft that could be used to fight fires. The discussions aren’t directly connected, but policymakers also say they need to make the best use of limited resources. The country donated 35 Yugoslav-era infantry combat vehicles to Ukraine in June.

Slovenian leaders say they need to prepare their military for a future in which there are more intense wildfires. They want to make it easier for the armed forces to get involved in disaster deployments. And they want to invest in military equipment that can also be used for firefighting.

Slovenia’s defense spending is among the lowest in the NATO security alliance, at 1.22 percent of gross domestic product annually. After Russia invaded Ukraine, Slovenian policymakers pledged to reach the NATO guideline, 2 percent, by 2030. They say they need to be ready for wildfires and to increase conventional combat preparedness at the same time.

“There will be these disasters of fires or floods. It will be more and more common,” Defense Minister Marjan Šarec said in an interview. “We must spend our money for everything that is needed. Because safety has no price.”

“It’s not a dilemma of cannons or butter,” said Šarec, who has also been a volunteer firefighter. “As a serious country we must do both.”

But military leaders say the dual-headed challenge can sometimes be significant, and even contradictory.

“Our training is going on in a military way. Exercises. How to use military equipment, how to fight, how to protect. How to defend,” said Glavaš, the head of Slovenia’s military command. “When you stop this training and you go to civilian tasks you need to focus your mind from fighting to something else. It’s very hard sometimes.”

He said that fighting fires “definitely” had an impact on combat readiness.

So far this year, wildfires have consumed almost 3,000 square miles of territory in the 27 nations that make up the European Union — far outpacing the previous maximum of 2,300 square miles as of Sept. 17. Europe began collecting wildfire data in 2006.

This year’s wildfires are nearly three times bigger than the average between 2006 and 2021. For weeks from June through August, heat domes settled across Europe, snapping temperature records, causing droughts and turning the continent’s forests into kindling.

“We have witnessed this summer an alarming acceleration and spread of wildfires,” Janez Lenarčič, the European Union’s top official for crisis management, told top European policymakers this month. He has pushed to expand the pool of E.U.-funded planes available for firefighting. “All these disasters are reinforced by the new reality of climate change, and we need to tackle that jointly.”

The fire in Slovenia started July 17 in the mountains that push up against the village of Kostanjevica na Krasu, a settlement of about 300 people who live around a few winding streets. The town is perched in the Karst region, which borders Italy. The area is forbidding. Its dry rocky soil makes farming a challenge. The wind blows so fiercely that locals must weigh down their clay-tiled roofs with rocks to keep them from tumbling away. And locals know not to stray too far from established trails because fighting in World War I was so fierce that the hills there are still peppered with unexploded ordinance. 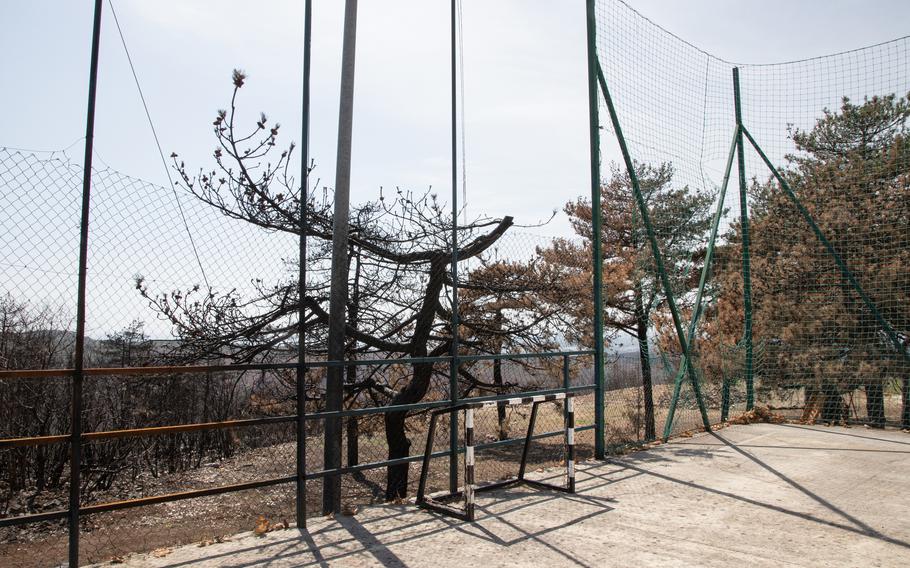 The aftermath of the fires near a sports field in the Karst region of Slovenia in August. (Špela Škulj/for The Washington Post)

“It was obvious it was going to be a hard summer, fire-wise, but we were not prepared for this,” said Boris Budal, the deputy commander of the fire brigade in nearby Sezana, which helped battle back the flames. “This outgrew our capabilities.”

This year the pine forests were dry and the underbrush was unkempt, perfect fuel for a fire that quickly gusted out of control. At night, the wind whipped the fire in one direction. Once the sun rose, the air started going another way, helping to spread it across the mountainsides. Immature pine cones heated up and popped open with flames. And on the ground, the leftover munitions kept exploding, making it impossible for firefighters to enter the forests by foot.

The fire needed to be fought from the sky — so the military was called in to supplement civilian firefighting aircraft with helicopters and heat-imaging drones. In the end, seven nations deployed their militaries to help Slovenia, including three that border Ukraine and have been nervous about the war spilling over their borders. Slovakia sent a Black Hawk military helicopter. Romania sent three air force planes. Hungary sent two combat helicopters with a crew of 13 people.

On the ground, soldiers organized many of the firefighting logistics, including driving tankers of water close to the front lines and cooking meals for civilian firefighters and displaced residents. More than 200 members of Slovenia’s armed forces were deployed on the ground, of a total military force of about 5,900.

“The whole cooperation with the military was larger than ever before,” said Budal, who has been a firefighter for 40 years.

No one died in the fire, but it consumed 15 square miles of forest in Italy and Slovenia. On the Slovenian side, it was triple the size of the previous record.

“A neighbor called me to say, ‘The fire is approaching the village, you should come right away. But I can’t guarantee your house will still be there,’ “ said Marjana Lavrič, a local journalist who lives in Brestovica pri Komnu, a valley village just over a mile from the Italian border. From the garden where she grows grapes, lavender and rosemary, the charred trees are less a hundred yards up steep, rocky hills.

She said that even after the immediate threat of the fire had passed, it was still possible to see the trees smoldering as she watched from her house, a 19th-century former seminary, at night. Weeks later, among the charred trees, plants had already begun to sprout, including spindly green stalks of wild asparagus.

Residents said they appreciated the help from the military — even if some of them said they were skeptical of military spending more broadly.

“We really thought the village was going to burn down,” said Maja Visenjak Limon, a freelance translator who lives in Hudi Log, a settlement of a few houses at the summit of a steep, switchback road, which was completely enveloped by flames. “I was told they were going to try to wet around the house with the water they had left.” The aftermath of the fires near Brestovica pri Komnu, Slovenia, in August 2022. (Špela Škulj/for The Washington Post)

She and her husband were told to evacuate three times. Each time, they thought they might never see their home again. They could see a military helicopter making runs out their back windows. But in the end, they — and their possessions — survived.

“A lot of people say, ‘Do we really need a military force? It can’t be big enough to do any damage,’ “ Visenjak Limon said. “People were saying, at last they’re finally doing something.”

Security policymakers say they recognize the growing challenge of responding both to traditional threats, such as Russia, and faceless ones, such as climate change. NATO has made climate change an increasingly central part of its discussions in recent years at the same time it has been scrambling to respond to the war in Ukraine.

“Climate change poses a serious risk to countries in the alliance, and we need to use our collective power to address that risk,” said Erin Sikorsky, a former top U.S. intelligence official focused on climate change who is now the director of the Center for Climate and Security, a Washington-based research center. “I think that does create some debate or tension between countries in NATO as they work it out.”

This summer, Sikorsky started keeping a record on Twitter of countries that deployed their militaries to fight fires, floods or other climate-related natural disasters. Her list, so far, is 49 emergencies long, from Argentina to Pakistan to Bulgaria to Jackson, Miss.

“You’re seeing it more and more in all different parts of the world,” Sikorsky said.

Some experts warn that if militaries are increasingly getting pulled into natural disasters, they need to do more planning.

“It’s really a question of organization. Are we going to use the military as a backup? Some people think that’s wise,” said Alice Hill, who worked on climate change and resilience on the Obama-era National Security Council and is now at the Council on Foreign Relations. “If you’re using that as a backup, what happens if those needs grow exponentially, as they are doing?”

The Washington Post’s Nejc Trušnovec contributed to this report.