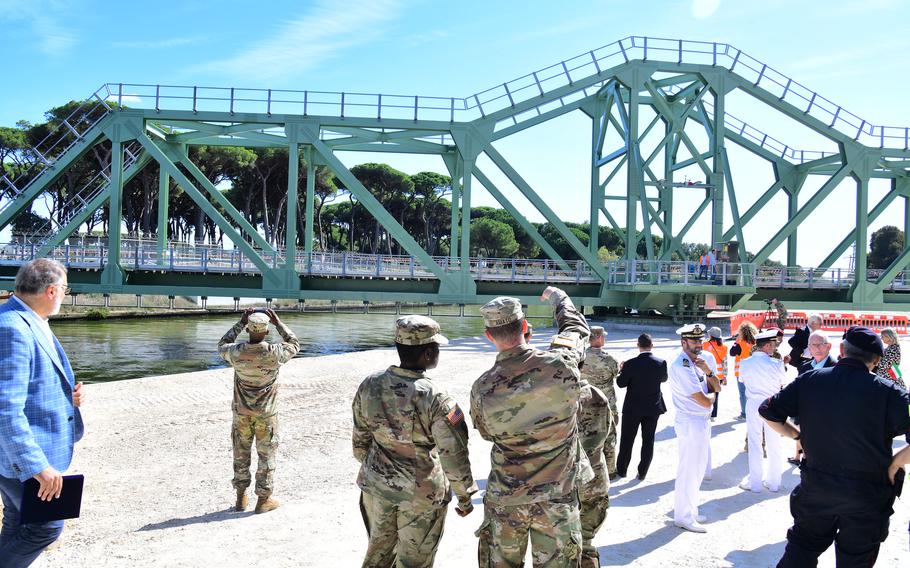 A $42 million project designed to supply U.S. military bases in Europe and Africa with ammunition and equipment includes a swing rail bridge spanning the Navicelli canal near the Port of Livorno in Italy. The 16th century waterway, adjacent to U.S. Army Garrison Italy's Camp Darby, was funded by the Medici family of Florence and connects the port with Pisa. (Elena Baladelli/U.S. Army)

NAPLES, Italy — Bullets and ordnance headed to U.S. service members in Europe and Africa now cross a 16th-century Italian waterway that has been transformed by a recently completed $42 million project.

“This project absolutely improves the capability of the Department of Defense and of the European command to put things in theater faster and more effectively,” Gomlak said. “So soldiers that need things, ammunition in particular, get it faster.”

The Navy oversaw engineering and construction on the project, which was built for an Army facility and funded by the Air Force, Gomlak said. 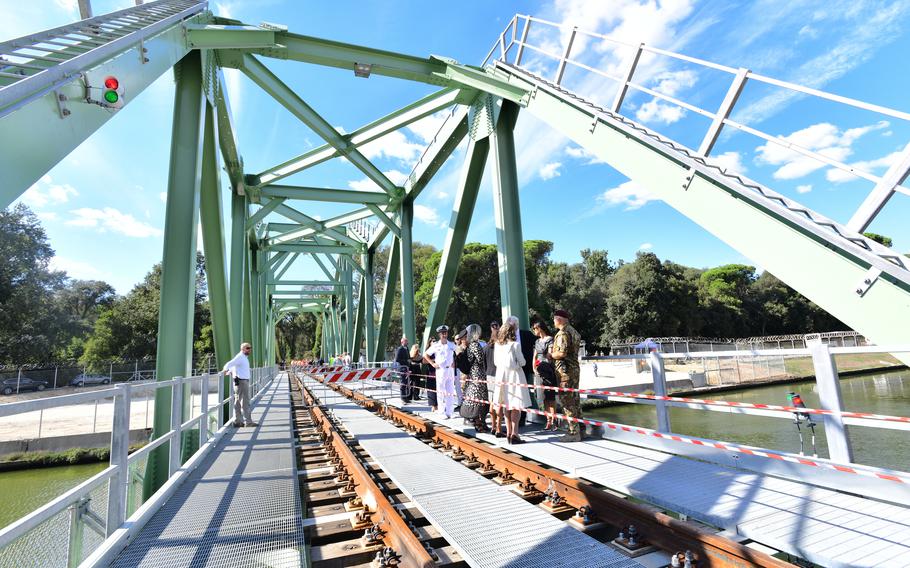 Officials cross the revolving bridge over the Navicelli Canal at Camp Darby, Pisa Ammunition Storage Area Italy, Sept. 22, 2022. The 16th century waterway was funded by the Medici family of Florence and connects the port with Pisa. (Elena Baladelli/U.S. Army)

Nearly three years were spent working through environmental requirements to not only minimize impact but also improve an Italian nature preserve in the ammunition storage area, Harder said.

That included planting 9,500 trees, creating four wetland areas and stopping construction for three months in the spring to avoid disturbing birds and other animals, he said.

The project, which included construction of two railheads that allow for secure, safe unloading of rail cars, used about 2,425 tons of steel, Harder said. Ukraine is one of the largest producers of steel products in Europe, but its supply capabilities were eviscerated by the full-scale invasion by Russia in late February, he said.

“As their capability was taken out of the market, the demand stayed the same,” Harder said. “So the cost went through the roof.”

Built between 1563 and 1575, the hand-dug canal was funded by the Medici family of Florence to connect the port with Pisa, according to Gomlack.

Use of the canal to move ammunition and other supplies onto the Italian railway system is a nod to the waterway’s past, he said.