Many Ukraine mothers go it alone with their children Yuliia Sirenko, 28, as she looks at photos of her husband at her home in Kharkiv, Ukraine on Aug. 11, 2022. (Heidi Levine/for The Washington Post)

KHARKIV, Ukraine — Yuliia Sirenko spent the summer alone in her apartment in the bombed-out city of Kharkiv, her heart pulled in two directions.

September loomed, and she had a decision to make: Stay to keep supporting her husband, Yurii, as he battled Russian troops in the east. Or go west, joining the young daughter she’d taken to safety several months earlier.

Millions of women with children have faced similarly wrenching scenarios since Russia invaded. Many have left the country, becoming refugees with all the immense challenges that entails. Yet for those who stayed put in Ukraine as their husbands or partners fought, there are separate struggles and dangers.

Some mothers have thrown themselves into volunteering and fundraising for their loved ones’ units. Others are consumed by child care, financial worries and family expectations.

“It’s very difficult, because when everyone is scattered around Ukraine, I have to be here and there,” Sirenko, 28, said in early August, sitting in the family’s eerily quiet apartment, where a 6-year-old’s bedroom was still filled with toys. Their building had escaped Russia’s indiscriminate shelling, but most neighbors had fled and hadn’t yet returned. “You live one day at a time.”

After more than half a year of fighting, the social services and networks that once helped to sustain the prewar country of more than 40 million people have largely broken down. NGOs are trying to house and assist newly single, displaced and widowed mothers. Their needs are daunting. And the start of the school year in September brought little respite: Just over half of schools reopened for in-person learning. 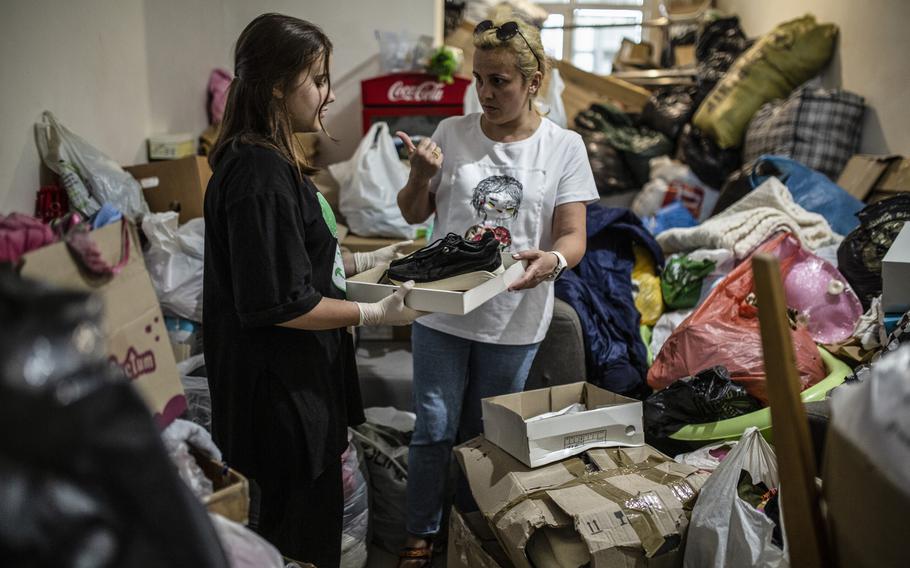 Iryna Arziaieva, 42, and her daughter Mariia,13, sorting donated clothing and shoes at the community center where they volunteer distributing clothing to those in need in Vyshneve, a Kyiv suburb on July 26, 2022. (Heidi Levine/for The Washington Post) 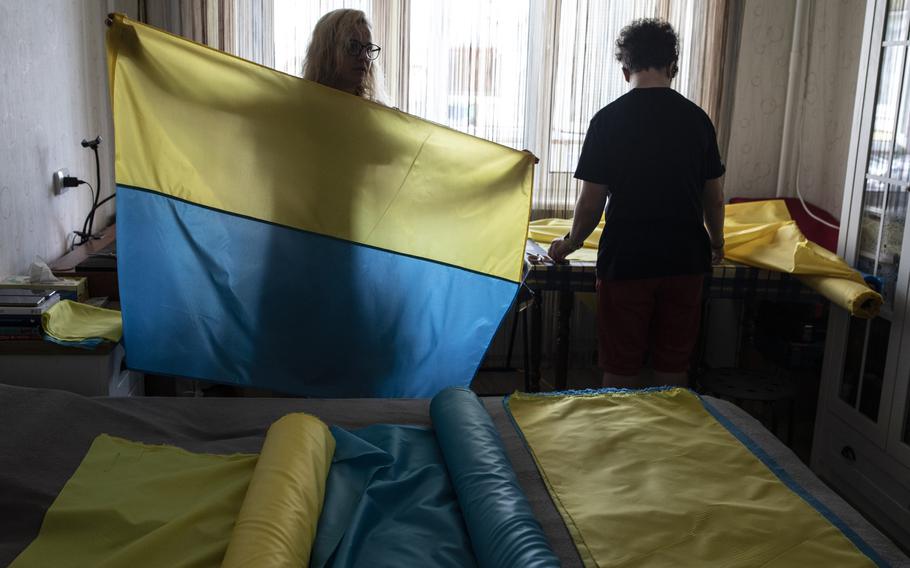 Iryna Arziaieva, 42, makes large Ukraine flags with the help of her son Illia, 15, in her home in Vyshneve, a Kyiv suburb on July 26, 2022. (Heidi Levine/for The Washington Post)

Iryna Arziaieva, 42, and her two children now subsist on takeout — something her husband, a health food enthusiast, would never have allowed. But he’s been gone since March.

The engineer turned platoon commander was sent east from the capital. At her lowest point before Oleksandr departed, Arziaieva silently screamed into a rolled-up towel, promising herself the family would escape this nightmare.

“I thought it would be hard for me to stay here,” she said. But after her husband left, she realized the alternative would be worse. So she, 13-year-old Mariia and 15-year-old Illia stayed put in their small apartment in the Kyiv suburb of Vyshneve. “I felt that he needs support — when we are here, when we are always in touch, when we can do something for Ukraine,” she explained.

That something has been sewing and selling Ukrainian flags using a machine sent by a stranger on Facebook. Through such small projects and online donations, she says she raised 15,000 euros, enough to buy Oleksandr’s platoon an anti-drone from Lithuania. Her bedroom is still filled with spools of thread and blue and yellow cloth. She and the children spent the summer with other volunteers sewing course camouflage nets and covers for soldiers in the field.

The trio has also volunteered at pop-up donation sites for Ukrainians who are displaced or no longer have a home. At one warehouse, Arziaieva and Mariia sorted clothing as recipients — hollow expressions signaling their hardship — started to line up. An air raid siren wailed. No one headed to a shelter, but the volunteers stopped sorting until they were sure there were no nearby hits.

In the lull, Arziaieva described missing her husband “whenever I have a free time ... when I see his things, when I am going to bed all by myself.” She started to tear up. Her daughter went in for a hug. 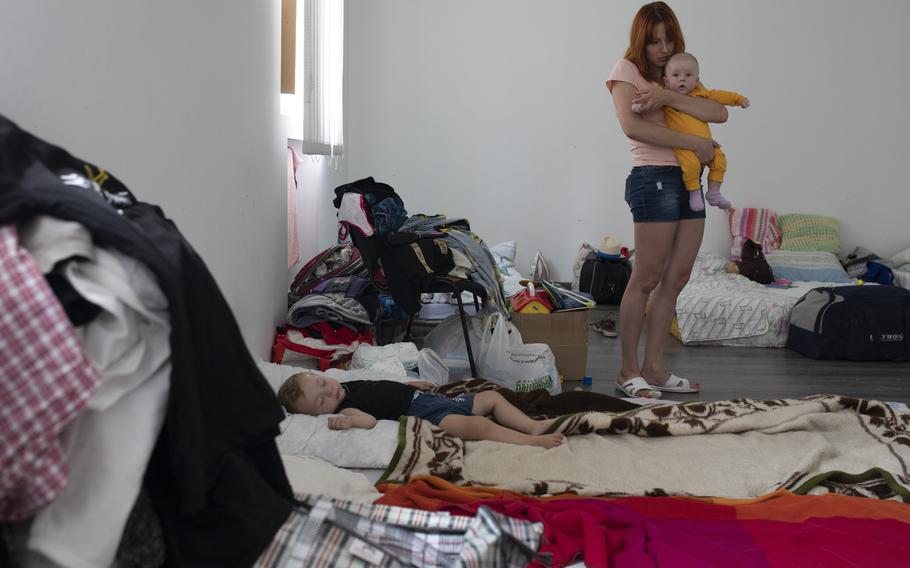 Tamara Bivalina, 31, holds her newborn son Artem, as another child sleeps in the room they are staying in at a shelter in Lviv, Ukraine on July 30. (Heidi Levine/for The Washington Post)

Other mothers, such as 31-year-old Tamara Bivalina, have decided they cannot feel safe even far from the fighting.

Bivalina’s child was born by Caesarean section in early March, and the next day Russian shelling hit close to the hospital in her hometown of Dnipro. Her husband, Maxim, was with Artem and took him down to the shelter. But, as Bivalina recounted this summer, she was alone and had to drag herself there from the recovery room, leaving behind a trail of blood.

She and Maxim had known from the start of the war that he would see combat; in 2016, he had fought pro-Russian separatist forces in the eastern Donbas region. Still, after he was deployed in May, the new mother felt scared and overwhelmed. She had little breastmilk, which she blamed on stress, and the fear of losing access to formula started to consume her. After another Russian rocket attack in mid-July, this time near the family’s home, she panicked: What if she and the baby had to live underground and he went hungry?

She decided to head west. A friend recommended a mothers’ shelter in Lviv, almost at the Polish border. It welcomed her with “open hearts,’‘ she said — and some sedatives so she could sleep soundly for the first time in months, albeit on a mattress in a group room.

“I’m afraid this will go on for a long time,” Bivalina said in late July, Artem tucked in a black baby carrier on her chest. She feared for her husband, for her friends, “for everyone,” she added. By mid-August, that fear was no less consuming. She left to stay with friends in Poland, unsure of what would come next.

Sirenko’s family is among the displaced who are bent on staying. 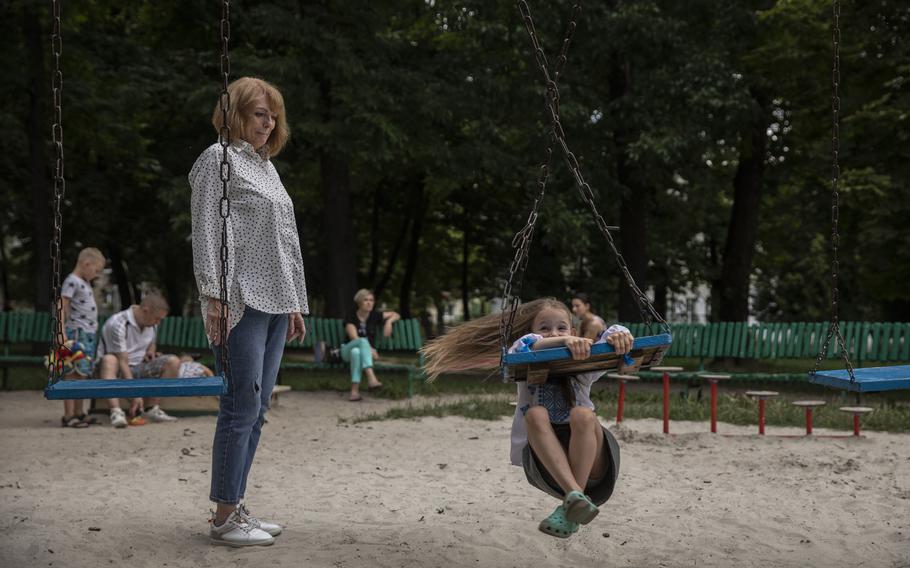 Vasylyna Sirenko, 6, with her grandmother at a playground in Lviv, Ukraine on July 30, 2022. (Heidi Levine/for The Washington Post) The family first fled their home a week into Russia’s invasion. Everyone but Yurii — who, like other men his age, was barred from leaving the country — then went on to Berlin. No one was happy there. They returned to Ukraine. Granddaughter and grandmother settled in Lviv — into a tiny apartment with a single bed, the best they could find — while Sirenko went back to the apartment in Kharkiv. There, barely 25 miles from the Russian border, she spent her days fundraising for her husband’s unit and buying them everything from chargers and cords to thermal imaging cameras and jeeps.

When she called Vasylyna, the once-carefree girl would often cry. She tried to put aside the pain, exacerbated when her pro-Russian mother bombarded her with messages calling Sirenko a bad parent.

By early September, she couldn’t bear Vasylyna’s tears any longer. She packed up and headed to Lviv so she could be with her daughter just before she started first grade.

Sirenko still hopes they will go back to Kharkiv and the little girl’s room full of toys — to await Yurii’s homecoming.

“As soon as it becomes clear that the city will no longer be bombarded,” she said, “we will return.”

Maria Avdeeva in Kharkiv; Kostiantyn Khudov in Kyiv and Vyshneve, Ukraine; and Serhii Korolchuk in Lviv contributed to this report.