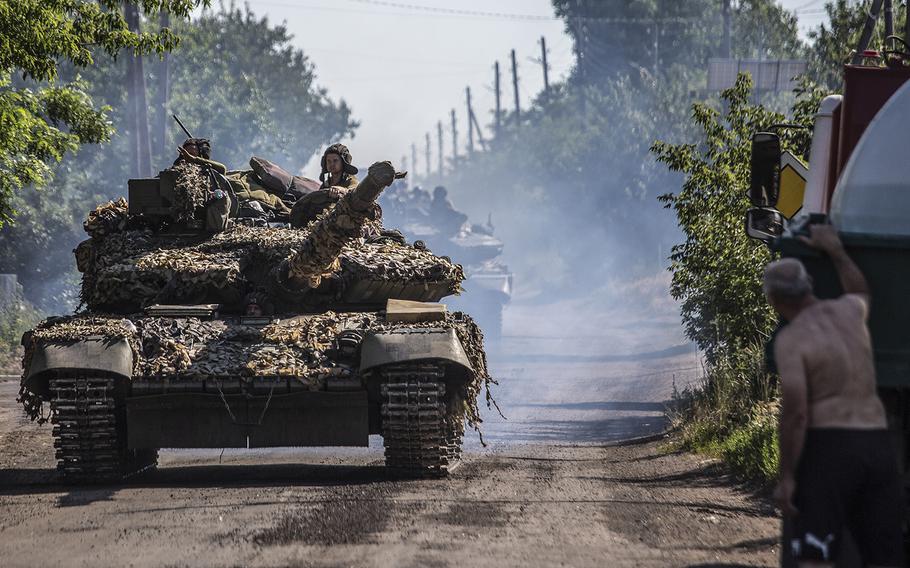 Ukrainian forces on tanks move along a road outside the eastern Ukrainian city of Lysychansk in June 2022. (Heidi Levine for The Washington Post)

Ukrainian officials have intensified their pleas for modern battle tanks and other heavily armored vehicles to use against invading Russian forces, citing their military's stunning advances in the northeast and mass graves they say they discovered there.

Mykhailo Podolyak, a top adviser to Ukrainian President Volodymyr Zelensky, circulated photographs on Friday that he said were from one of the burial sites discovered near the city of Izyum, which Ukrainian forces reclaimed this week from the fleeing Russian military.

"For months, a rampant terror, violence, torture and mass murders in the occupied territories. Anyone else want to 'freeze the war' instead of sending tanks?" Podolyak tweeted, referring to the idea that Russia could hold Ukrainian territory for a long time. "We have no right to leave people alone with the Evil."

Ukraine's military, with its aging fleet of mostly Soviet-era T-64 tanks built during the Cold War, has pleaded for modern battle tanks since March. To speed the end of the war, Podolyak said earlier in the week, Ukraine needs more multiple-launch rocket systems to destroy Russian logistics hubs, tanks and armored personnel carriers to liberate territory, air and rocket defenses to protect critical infrastructure, and drones to target Russian forces.

"Time for the final strike against Evil Empire," he said on Twitter.

Any introduction of modern Western tanks would enhance Ukraine's ability to carry out modern combined-arms warfare, in which a military blends its infantry on foot and in vehicles with other forces, including artillery, tanks and aviation, said Mark Cancian, a senior national security analyst with the Center for Strategic and International Studies.

Cancian assessed that Russia launched its invasion without enough infantry to protect its armored vehicles, in part precipitating Russian President Vladimir Putin's failed attempt to seize the capital city of Kyiv this spring. Ukraine, on the other hand, has a fierce infantry force but is still in the process of training enough soldiers to use and maintain armored vehicles - something that matters during an offensive.

"When you're hunkered down in a trench, having armored personnel carriers doesn't help you that much," Cancian said. "But when you're offensive, the mobility and the firepower help."

So far, NATO allies have been slow to send tanks and infantry fighting vehicles, a class of weapon that typically carries troops into combat while equipped with armor and heavy weapons that can be used on large targets, but do not include the large-caliber "main gun" on a tank.

But no NATO country has pledged to provide Ukraine with modern tanks or infantry fighting vehicles, irking Zelensky's administration. Podolyak has specifically called out Germany, saying in an interview with The Washington Post that Berlin needs to understand that the "timeline for the end of the war is dependent on its position" and that Ukraine needs Germany's Leopard tanks and Marder infantry fighting vehicles.

German officials have been stung by the new round of charges that Berlin is not doing enough to help Ukraine, and published meticulous, regular updates of shipped supplies, including Gepard antiaircraft guns, multiple-launch rocket artillery, and antiaircraft Stinger missiles. On Thursday, Germany announced it also would send 50 Dingo armored vehicles, but no tanks.

Ukrainian officials have not said how many modern tanks they want. About 120 of them would be enough to equip three Ukrainian battalions, with 500 to 1,000 main-gun rounds per tank and accompanying machine-gun ammunition "the minimum that could make a difference," said retired Army Maj. Gen. William Nash, who commanded a tank brigade in Operation Desert Storm and the 1st Armored Division in Bosnia-Herzegovina.

Although Ukrainian forces have shown adaptability in operating foreign systems, soldiers would still require training to manage new equipment and keep it running. Nash recalled that when the United States sent light armored vehicles to Saudi Arabia in the mid-1990s, "the easy part was teaching them how to drive and shoot."

"The hard part was how to maintain them," Nash said. "To this day, American contractors are still supervising maintenance."

Western willingness to supply tanks may depend on Ukraine's offensive strategy going forward. In the Kharkiv offensive, small villages have been taken one by one, after artillery barrages and often following Russian retreats. Retaking the Donbas region, where Russian-allied forces have been entrenched for years, and most combat has centered so far on artillery duels, is likely to require a far more sustained and combined combat effort.

Nash said that if he were commanding Ukrainian forces, he would be asking for Leopard tanks now and saying that they are needed for the current campaign. But the fact of the matter, he said, is that if modern tanks are approved now for transfer to Ukraine, they likely won't be available in sufficient numbers with trained personnel until a future Ukrainian offensive.

Scott Boston, a military analyst at the Rand Corp., agreed that sending tanks to Ukraine now is likely to help more in subsequent offensives. The Leopard, he said, is a very good tank, and fielded by enough European countries that the burden of providing them and needed spare parts could be shared by several NATO allies.

The Leopard and other modern tanks, including the M1 Abrams fielded by U.S. forces, offer far more protection for troops inside than more-lightly armored Soviet-era tanks, Boston said.

"In combat, protection often rises to the top of what people want," Boston said. "In the kind of grinding combat operations that they've had, man, I would want more protection."

A senior U.S. official, speaking on the condition of anonymity because of the sensitivity of the issue, said it is unlikely that the Biden administration deviates from the kinds of weapons that it is sending anytime soon, including to provide its own tanks or infantry fighting vehicles.

Leopard tanks - which are also fielded by Greece, Portugal, Canada and other allies - typically weigh more than 70 tons, depending on the variant. The Abrams typically weighs nearly 80 tons, and has a gas-turbine engine that infamously guzzles fuel and would create an even greater logistical burden on Ukrainian forces, the U.S. official said.

The United States has approved more than $15 billion in weapons transfers to Ukraine this year, gradually increasing the size and scope of the arms it sends as the war grinds on. But it has stopped short of providing some weapons that Ukraine covets, including the MGM-140 Army Tactical Missile System, or ATACMs, which can reach up to 190 miles. Anyone sending long-range missiles could become a direct party to the conflict, Russia has warned.