IZYUM, Ukraine — Russian forces terrorized residents throughout their six-month occupation of Izyum, a strategic hub in northeast Ukraine, with witnesses and victims this week recounting the torture, killings and forced disappearances that soldiers carried out. And as they bore witness, the Ukrainian officials now back in control of the city worked to unearth evidence of those potential war crimes.

Investigators on Friday started to exhume the bodies of more than 400 civilians buried in a makeshift cemetery and as many as 17 Ukrainian soldiers buried in a mass grave at the same site. The area, located in a forest just outside Izyum, had been used as a Russian military position.

Officials said they had quickly identified signs of torture on some of the corpses. At least one had a rope around his neck, they said.

About 100 investigators stoically dug up the graves — each marked with a simple wooden cross and number — and took notes on the condition of the decomposing bodies, measuring them and searching for identifying details. The stench of death filled the air, and booms echoed through the woods as Ukrainian forces demined a nearby area.

Several investigators in white jumpsuits and gloves stood in the large pit where the soldiers’ mass grave was discovered. They put each body in a white plastic bag, then carried the bags to flat ground nearby. One worker then unzipped each bag to closely examine its contents. The soldiers’ identities were unknown — their faces so damaged or decayed from the time underground that they were no longer recognizable.

Clothes were searched for any clues of names. In one man’s pockets, the worker found only nasal spray and medicine. Another soldier carried a silver cellphone, a wall plug, a metal spoon, headphones and two painkillers. The investigator used the man’s army fleece to wipe off the phone screen, then tried to turn it on before placing it inside a small bag for further examination.

In the next body bag, he found a man whose left leg was crumpled high under his left arm. He was shirtless and covered in sand, wearing two yellow and blue bracelets on his left wrist. Bit by bit, the investigator wiped away the sand to reveal several tattoos that might help determine the soldier’s identity, including one on his left arm: the name “Alina” with small hearts dotted around it.

Evidence uncovered at the burial site is part of a much larger story of horrors that unfolded in this city after Russian forces took control in March. Despite a sense of optimism over Ukraine’s recent wins in reclaiming territory, civilians coping with the aftermath of the Russian occupation are still reeling over what they have endured. Some are struggling to believe the peace in their city will hold.

Around 50 people are still sleeping in the basement of a kindergarten. Some are so fearful of another attack that they refuse to go home even during the day, instead cooking in the outdoor playground. In March, some 200 people sought safety there, sheltering in such a tight space that “some people would have to sleep sitting up,” said Anna Kobets, 38. One old man was killed when the courtyard was shelled. Even now, loud noises can send the children sprinting back to the basement. 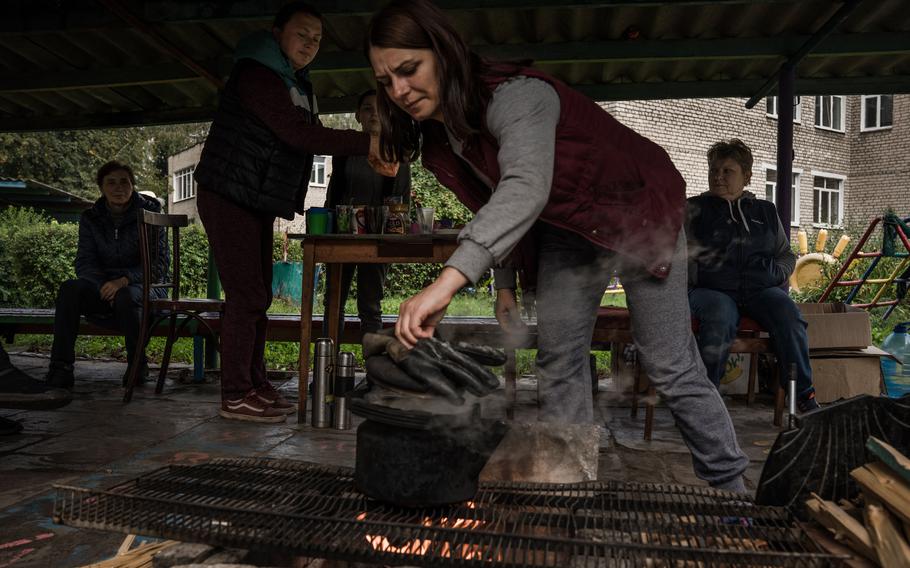 Anna Kobets heats water for tea and coffee outside the kindergarten where she has lived with others in Izyum since the war began. (Wojciech Grzedzinski/The Washington Post)

Kobets’s husband, Vitaliy Kaskov, 39, was among those staying at the kindergarten at the beginning of the war. As the Russians advanced on Izyum, the former soldier buried his weapon near the school to hide it from the enemy. He feared that as they scoured the city for collaborators, his presence could put other lives at risk.

Eventually, Kaskov decided to hide elsewhere. When he returned on April 20, Kobets said, he was accompanied by Russian soldiers who had beaten him so badly he had enormous welts on his scalp and could only open his eyes by rolling back his head. The soldiers shot into the air and at the ground. Kaskov showed the troops where he had buried his weapon, and they took him away and brought his wife in for questioning, covering her head with a bag.

For five hours, she said, the Russian soldiers psychologically tormented her, saying they were holding her father in another room and would beat him if she didn’t give them information about collaborators. She was eventually returned to the kindergarten.

Her mother later walked through the city asking Russian soldiers and officials where her son-in-law had been taken. She finally heard he was alive but as a prisoner-of-war in the Belgorod region of Russia. The family has been unable to confirm this, Kobets said. Nor have they seen or heard from Kaskov since the day the troops took him from the kindergarten in mid-April.

Local residents said Friday that many people went missing in similar circumstances, just one reason they feared any interaction with the troops.

There were other reasons to be afraid.

One woman, whom The Washington Post is not naming out of concerns for her safety, said three soldiers burst into her home in March and raped her for three hours. “They were drunk and had those strange [drugged] eyes,” she said. “Blood was pouring out of me afterward. I couldn’t leave my house for a week.”

She tried to protect her daughters, ages 15 and 22, from the same fate. But desperate for money, the sisters went out one day to look for work as cleaners, she said. Russian soldiers brought the younger one back home — alone.

“I don’t know where she is,” the mother said Friday, crying for her older daughter. “I don’t know!”

Another group of soldiers insisted on squatting in the same house where she and several other people were staying, forcing the Ukrainians to sleep on the floor of a single room. For three days, they were not allowed to go to the bathroom, she said. She was fed only one spoonful of porridge, she said, and was so hungry that her head was spinning. A woman cries as she recounts what Russian soldiers did to residents of Izyum during their occupation of the city. (Wojciech Grzedzinski/The Washington Post)

Since Russian forces left the city around a week ago, humanitarian workers have been handing out food aid to civilians. But many are only surviving on what little they can scrape together.

Viktor Boyarintsev, 68, picked up a box of food supplies from a handout on his block on Friday — his first aid in months.

“Hurry, hurry!” his neighbors yelled as others ran down the street hoping to receive a package.

Boyarintsev wept as he described how his wife had died of treatable heart disease because they couldn’t get the medicine she needed. Fearing he would die in the shelling if he buried her himself, he handed her over to a local funeral service that sent him a picture of her body and a number on the cross they planted atop the grave.

He still tends the roses his wife planted before she died. With no heat and plummeting temperatures, he is cuddling his two cats for warmth — but worries that this winter could be as bad as the last one.

Finding creative ways to eat and stay warm is how civilians say they survived the occupation.

One older resident, who gave his name only as Mykola, has been living with an unexploded rocket lodged in his water pump well since April. At first he was afraid, he said. But it’s the only place where he can collect water. “So I just got used to it,” he said.

That rocket was among the least of his problems, though. “There were planes dropping bombs. It’s good I survived each second,” he said.

He made a wooden stove to heat his house and has since been collecting wood leftover at former Russian checkpoints, carrying enormous logs on the back of his bike. With no electricity or gas, the wood will help for cooking and staying warm as the weather grows cold in the months ahead.

On Friday, a chilly rainstorm set in several hours after the exhumation had begun. Dirt dug out of the graves started to turn to mud. Rain covered the plastic body bags, and markings written on the side started to run.

The workers paused to put on ponchos — then got back to work. There were still more bodies to find.

Whitney Shefte and Serhii Mukaieliants contributed to this report.